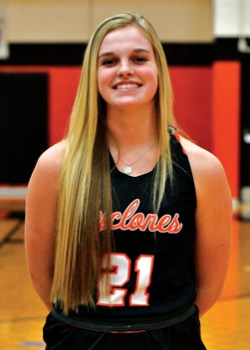 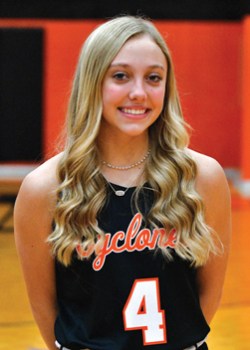 FROM STAFF REPORTS
Coach Lucas Andrews Elizabethton Lady Cyclones could have folded after playing a bad second quarter where they scored only two points against the Jeff County Lady Patriots but Elizabethton put that eight minutes in the rearview mirror as they went on to defeat the Lady Patriots 51-48.

After outscoring Jeff County 18-11 in the opening quarter, the Lady Cyclones couldn’t seem to find the bottom of the net in the second quarter where they suffered through the scoring drought to find themselves even at the half.

Lina Lyon led the charge early for the Lady Cyclones scoring eight points in the opening quarter. Marlee Mathena added four points while Renna Lane and Maddie Fowler connected for a trey each.

Lyon scored the only deuce of the second quarter as the Lady Cyclones regrouped at the break.

The Lady Cyclones outscored the Lady Patriots 31-28 in the final 16 minutes of action to earn the hard-fought victory.

Lane caught fire in the second half hitting 13 points in the closing half as she and Lyon finished with 16 points apiece to lead the Lady Cyclones.

Mathena finished the contest in double figures with 10 points. Katie Lee contributed with five points while Fowler chipped in with the three points. Reiley Whitson closed out the scoring for Elizabethton hitting 1-of-2 from the charity stripe.

MaMahan led Jeff County with 15 points in the contest while Alvey and Satterfield added 13 and 11 respectively.