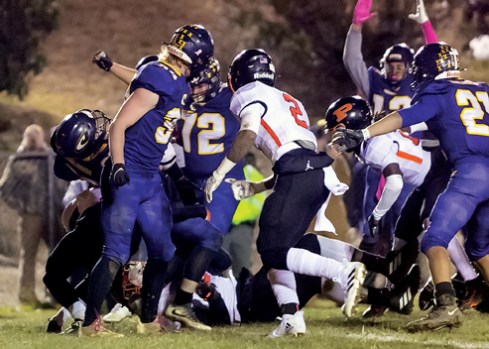 Star Photo/Larry N. Souders The Highlanders Caleb Sluder (35) falls backwards into the endzone, giving Cloudland an early 6-0 lead, on a five yard run on first and goal mid-way through the first quarter. 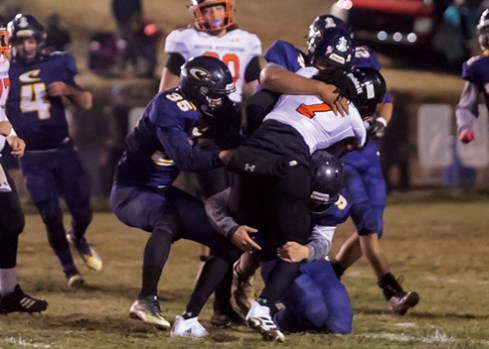 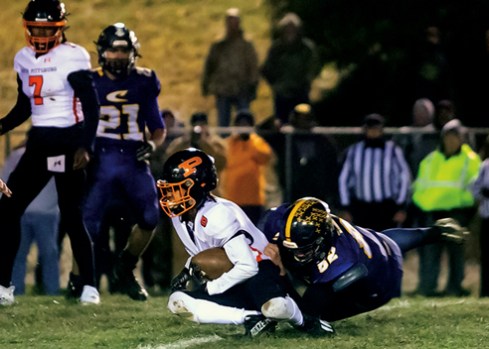 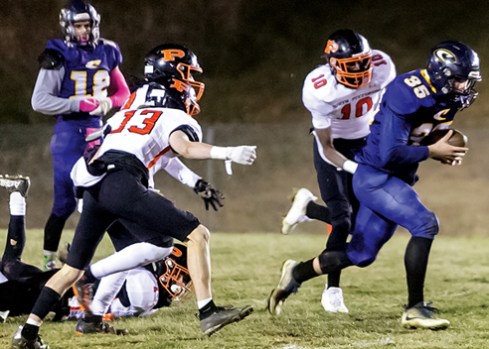 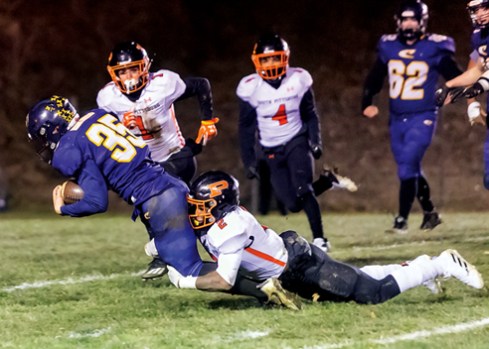 Star Photo/Larry N. Souders Cloudland’s Caleb Sluder (35) is caught from behind and tackled a half yard shy of the goal line by the Pirayes De’Andre Kelly (2) Setting up a fourth down try. The Highlanders were flagged for a false start and then stopped short of a touchdown thaat would have given them a two touchdown lead. 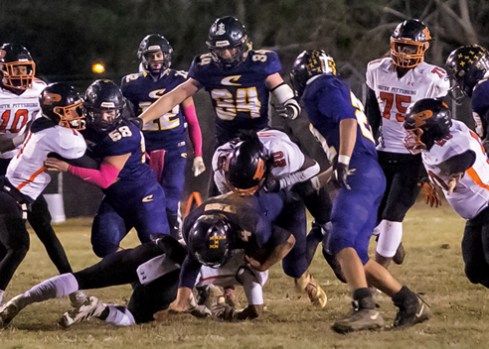 Star Photo/Larry N. Souders The Highlanders Seth Birchfield (4) picks up a crucial first down to keep a drive alive late in the fourth quarter. 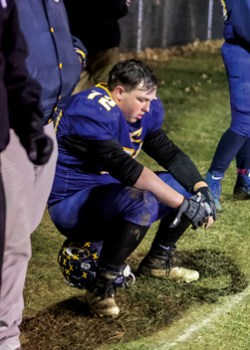 Star Photo/Larry N. Souders Eli Benfield (72) looks on from the sideline as time expires and the Highlanders fall to South Pittsburgh in the State Semi-finals 30-22.

BY ALLEN LAMOUNTAIN
STAR CORRESPONDENT
A tale of two halves took shape on Friday night at Orr Field as Cloudland dropped a 30-22 decision to South Pittsburg in the Class 2-A TSSAA semifinal contest.
Cloudland dominated the first half on the ground and took a 14-7 advantage into the break.
South Pittsburg (11-2 overall) took the second half with senior quarterback Richard Hunter getting red hot in the second half with three touchdown completions as the Pirates outscored the Highlanders 23-8 in the second half.
Hunter overall completed 10-of-16 passes for 168 yards and had a pair of scoring tosses to his twin brother Reginald who caught five balls for 106 yards and a pair of two-point conversions.
“That kid is a phenomenal athlete,” commented ‘Landers head coach Zac Benfield. “We had the right call and the right coverage he just made the plays. The passing game hurt us in the second half for sure. It was an accumulation of things. We did the kinds of things we did all year and one play didn’t beat us.”
Cloudland’s opening drive ended with a fumble recovered by the Pirates, but on their second play, they lost the ball on a fumble back to Cloudland.
This time the ‘Landers took advantage, driving 81 yards on 14 plays with senior running back Caleb Sluder rumbling four yards for the touchdown.
The pass for two failed and the ‘Landers led 6-0. Cloudland made it 14-0 after South Pittsburg’s field-goal attempt saw the snap sail over the head of the holder and Cloudland took over at the 25-yard line.
This time the ‘Landers drove 75 yards on just four plays with Sluder blasting up the middle on a 65-yard scoring run. Seth Birchfield cashed in the deuce and Cloudland held a two-touchdown lead.
The Pirates took possession at midfield after a short punt and Hunter connected with Hunter on a 27-yard scoring pass and Cooper Keown kicked the point after.
The Pirates took possession of the ball at the Cloudland 46-yard line after a squib kickoff and the Bucs marched that distance on four plays with Deandre Kelly scoring on a 14-yard run to knot the score at 14-14.
Cloudland (12-2 overall) marched 70 yards on 13 plays on the next possession with Birchfield scoring on a four-yard run and also scoring the two points as the ‘Landers took a 22-14 lead with 5:28 left in the third period.
The fourth quarter was all South Pittsburg as the Pirates got a 35-yard scoring pass from Hunter to Kelly and with the two-point conversion tied the game at 22-22.
South Pittsburg then sent an onside kick just over the first line which bounced off a ‘Lander receiver and was recovered by the Pirates at the ‘Landers 43-yard line.
Hunter found his brother down the sideline for a 40-yard scoring toss and the Hunter to Hunter connection was also good for two and a 30-22 advantage for the visitors.
Cloudland methodically marched across midfield when South Pittsburg forced another fumble and the Pirates were able to run out the clock on Cloudland’s championship hopes.
“I am so proud of these boys and what they accomplished this year,” Benfield said. “Not just for the school but for the community and for themselves. These guys gave everything they had and did everything the coaches asked of them and I can’t say enough about their effort this year.”
Sluder finished with 183 rushing yards on 29 carries and Birchfield added 167 ground yards on 34 tries.
—
2021 TSSAA Class 1-A State Semifinal
Orr Field – Roan Mountain
South Pittsburg 30-22
S. Pittsburg  0  7    7  16 – 30
Cloudland    6   8    8     0 – 22
Scoring summary
First Quarter
C – Sluder 4 run (pass failed) 3:21
Second Quarter
C – Sluder 65 run (Birchfield run) 5:35
S – Hunter 27 pass from Hunter (Keown kick) 2:12
Third Quarter
S – Kelly 14 run (Keown kick) 10:38
C – Birchfield 4 run (Birchfield run) 5:28
Fourth Quarter
S – Kelly 35 pass from Hunter (Hunter pass to Hunter) 8:14
S – Hunter 40 pass from Hunter (Hunter pass to Hunter) 5:48