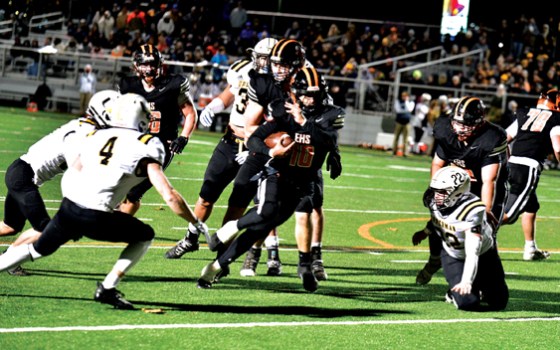 Star Photo/Ivan Sanders Cyclone quarterback Bryson Rollins makes a cutback on his way to the second Cyclone touchdown of the night against Upperman. 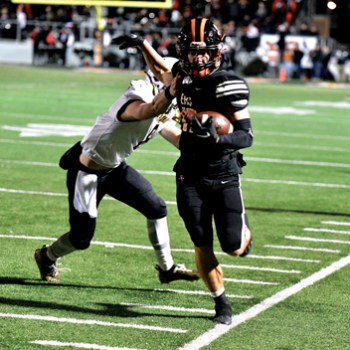 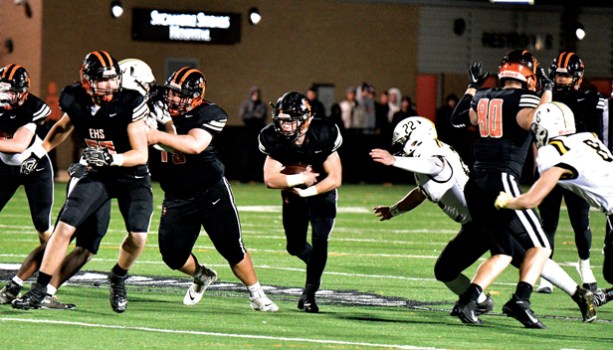 Star Photo/Ivan Sanders Cyclone running back Cade Russell takes advantage of a big gap created by his offensive line for a good pickup. 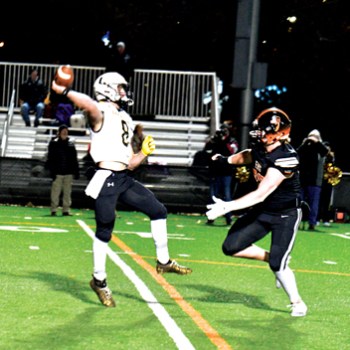 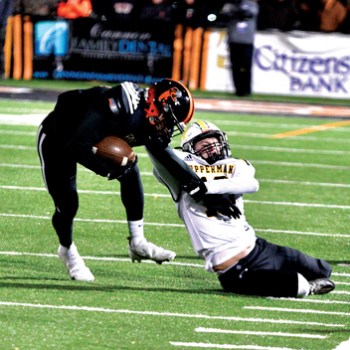 Star Photo/Ivan Sanders Nate Stephens of Elizabethton is pulled down by an Upperman defender on a kickoff return. 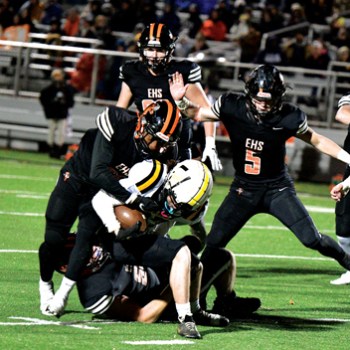 Star Photo/Ivan Sanders The Cyclone defense was rock-solid all night long as Upperman's Jaxson Rollins is smothered on a carry for the Bees. 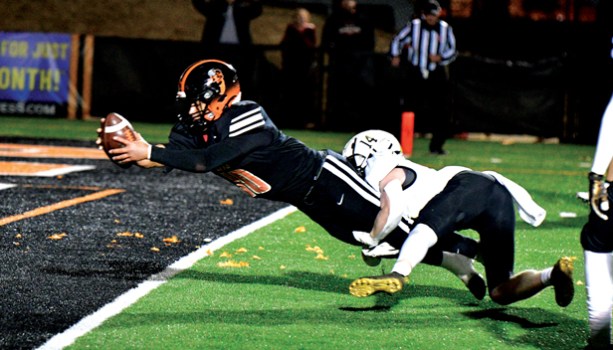 Star Photo/Ivan Sanders Cyclone quarterback Bryson Rollins puts the final nail in the coffin when he stretches the football across the goal line late in the fourth quarter. 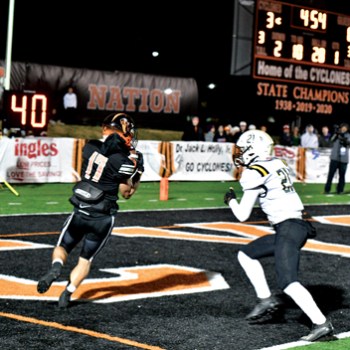 Star Photo/Ivan Sanders Elizabethton's Jake Roberts hauls in a touchdown pass to extend the EHS lead to 10-0 after Sean Smithdeal's point after in the first quarter.

BY IVAN SANDERS
STAR SPORTS EDITOR
ivan.sanders@elizabethton.com
There had been a lot of chatter from around the Upperman area about the Bees having the best offensive running game in the state however it doesn’t appear that Bees do too well in cold weather.
Holding the visiting Upperman Bees to 199 yards of total offense, the Elizabethton Cyclones punched their ticket to take a ride on the Chattanooga Choo-Choo with an opportunity to earn their third straight gold ball next week at Finley Stadium on the campus of UT-Chattanooga against Tullahoma after the Cyclones took a 23-6 semifinal win at Citizens Bank Stadium Friday night.
Tullahoma (14-0) earned the right to face Elizabethton (12-1) with a 44-19 win over last year’s state finalist Haywood.
The Cyclones got rolling early as Sean Smithdeal punched in a 22-yard field goal with 5:03 showing on the first-quarter clock.
On the ensuing kickoff, a kick by Mason Williams appeared that it was going to take a bounce toward a waiting Upperman returner but took an unusual bounce back toward oncoming Elizabethton defenders who pounced on the loose pigskin to put the ball back in the hands of the Elizabethton offense.
The Cyclones proceeded to drive the ball toward the end zone and capitalized when quarterback Bryson Rollins found his favorite receiver Jake Roberts for a 28-yard scoring toss to make it 10-0 after Smithdeal’s point-after kick split the uprights.
Elizabethton added another score in the second quarter to go up 16-0 as Rollins used his feet to scoot in from seven yards out. The point-after was blocked.
Both teams entered the locker room with the same 16-0 score.
Upperman tried to get back into the game in the third quarter as Ty Dutchess found an opening and romped 31 yards to the end zone. The Cyclones stuffed the all-important two-point conversion leaving the game at a two-score contest, 16-6.
The Cyclone defense just wouldn’t bend anymore as Rollins put an exclamation mark on the win with a 14-yard run with :39 seconds remaining and Smithdeal blasted the PAT to give the game its final score of 23-6.
Elizabethton had 15 first downs in the contest as Rollins was 11-of-20 for 126 yards, the score, and one interception. The Cyclones carried 41 times for 154 yards to finish the game with 280 total yards.
Rollins carried 22 times for 103 yards and two scores with Cade Russell adding 13 carries for 48 yards. Roberts had nine receptions for 89 yards and the touchdown.
Dutchess led Upperman with 12 carries for 134 yards and a score. Dutchess had a big run early but Jake Roberts punched the football loose and recovered.
Defensively, Trenton Taylor had a sack while Roberts had an interception. Roberts and Dalton Mitchell had a fumble recovery.
“It feels great to have all our seniors win one last game at Citizens Bank Stadium and get to go to a new place to play for the state championship,” said senior linebacker Blake Stewart. “We really prepared for their run game. They talked a lot of smack about it and said they were the best team in 4-A. I guess they were wrong.”
“They started to get a little wiggle room right before halftime with the quarterback run,” said Cyclone head coach Shawn Witten. “We started to get a little sloppy and a little tired on defense.
“There were three critical plays in the game – Jake (Roberts) punching the football loose, stopping the two-point conversion, and the kick early on in the game. Their defensive line was really stout and we got some momentum early.
“Our defense did another great job tonight. They came up huge today and I am really proud of them. They have been superb all year long.”
Elizabethton and Tullahoma square off at 11 a.m. next Saturday for the 2021 TSSAA BlueCross Bowl 4-A championship.