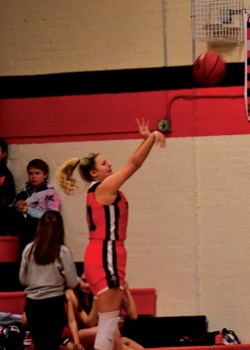 Star Photo/Gracie Fields Kalli Shepard puts up a shot from the corner for the T.A. Dugger Jr. Lady Cyclones. 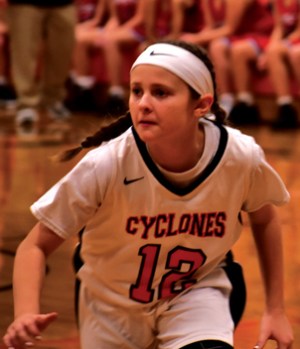 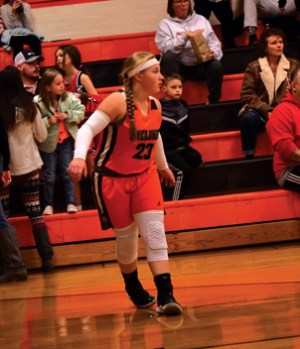 Star Photo/Gracie Fields Sadie Williams of TAD looks for a pass as a play develops for the Jr. Lady Cyclones.

BY GRACIE FIELDS
STAR CORRESPONDENT
As a lively crowd poured into the stands, T.A.Dugger and Sullivan East junior varsity girls ready themselves for the upcoming basketball game.
T.A.Dugger flooded the court as they fought with a strong defense. Laci Gobble fought her way through the offense to score an
important three-pointer. The crowd roared with energy as both teams fought strong. Sullivan East came into the game with a strategy of aggressive plays and determination.
Coach Kelsie Winters encouraged her Jr. Lady Cyclones throughout the game and made sure that they continued to fight. As the game concluded, Sullivan East scored a two-pointer which left them to take a victory over T.A.Dugger.
The final score was 23-21 in favor of Sullivan East.
Next up, the varsity teams from both schools began their warmup drills after the junior varsity teams were done.
In the first half, T.A.Dugger’s girls took a solid lead by scoring 26.
Kalli Shepard took control of the ball as she scored seven points alone in the second quarter. Sullivan East girls didn’t hesitate to fight back and gain their fair share of the ball during the first half.
The Sullivan East players had great ball control which led them to score 13 more points during the second quarter.
T.A.Dugger’s head coach Matt Fox brought the energy as he continued to cheer on his players all throughout the game.
As the game winded down, T.A.Dugger and Sullivan East fought hard to score every point they could.
The fourth quarter was tense as both teams made every last movement they could count. The game ended with T.A.Dugger in the lead by 18 points.
The final score of the varsity game was in T.A.Dugger’s favor, 46-28.
—
Varsity
TAD, 46-28
TAD (46)
Adrian Heading 3, Michelle Shields 14, Kalli Shepard 7, Rylee May 6, Reagan May 2, Sadie Williams 4, Jasy Shell 2, Jamira Shields 8.
East (28)
Jones 2, Cox 9, Hall 9, Holt 1, Lyons 2, Johnson 5.
JV
East, 23-21
TAD (21)
Sydney Minton 1, Laci Gobble 8, Daisey Parks 6, Londyn Taylor 2, Caylie Tester 4.
East (23)
Holt 1, Whisenhunt 4, Cross 8, Lyons 8, Daisy 2.