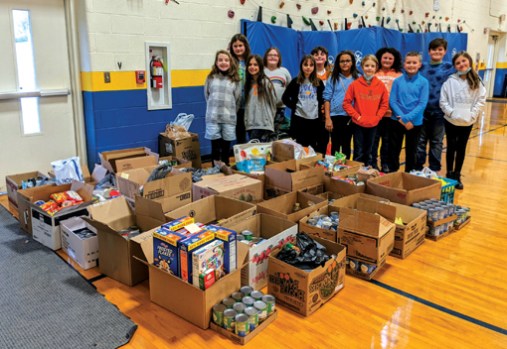 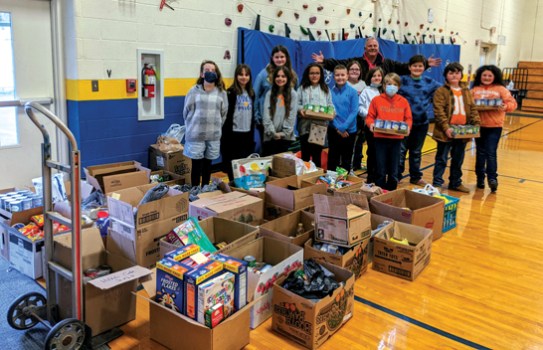 Photo Contributed Teddy Lewis with Much Food Ministries is elated to receive food from the K-Kids at Harold McCormick Elementary. The school donated nearly 1,300 items of food to the food pantry.

BY IVAN SANDERS
STAR STAFF
ivan.sanders@elizabethton.com
A group of fifth-graders at Harold McCormick Elementary took on a growing problem in their community and made a big impact.
K-Kids, a branch of the Kiwanis in Elizabethton, is a service community program that currently is comprised of 12 fifth-graders at the school who were nominated for good behavior, quality characteristics, and for being all-around good students.
“In November, they do a can food drive,” said one sponsor Amanda Righter. “Our first meeting was in October where we talked to the students and they thought it would be a good idea to do a community service project.”
The students immediately went to work making posters to hang around the school with a big reward of a pizza party for the class which collected the most cans of food.
When the final count was made, 1,292 cans of food were collected by students. Assistant Principal Penny Nave told Righter that normally there were around 800 cans of food collected. The winning class was Brandi Erwin’s fourth grade with a total of 180 cans.
Righter said the K-Kids were fully committed from start to finish.
“Just the expression on the fifth graders’ face – they were very impressed with the willingness of the community to give,” Righter said. “For a lot of people, it may be hard to give at this time, so it was nice to see that families were willing to give and the students were very appreciative.”
Righter said that it was a total school effort in reaching the number of canned foods they were able to provide to the food pantry.
“As a sponsor of K-Kids, it was impressive to see how the whole Harold McCormick reached out just not the K-Kids,” said Righter. “It was amazing to see how all the kids contributed and were willing to get involved in this can food drive. They wanted to be successful and it wasn’t just about winning a pizza party – it was about doing good for the community and how it would help others.”
The food was presented to Teddy Lewis and his wife, Cindy, who operate the Much Food Ministries in Elizabethton which distributes food once a month from their food pantry to families in need in the area.
“Our fifth-graders stayed after school and counted the cans from each classroom,” Righter said. “They carted the canned food down the elevator and to the gym where they helped load Mr. Lewis’s truck on Nov. 22.”
K-Kids students involved in the food drive were Eli Parsons, Emma Dillingham, Isabella Smith, Jaden Coleman, Cortland Jarrett, Izabella Wilber, Jacob Fletcher, Maya El Helou, Isabel Foley, Kaylin Price, Stokes Power, and Vada Jarrett. Sponsors included Righter, Cindy Grindstaff and Charles Casey. Tim Broyles is the Kiwanis coordinator.
The K-Kids are now focused on their December project where they will be preparing goody bags and notes of appreciation for the faculty and staff.