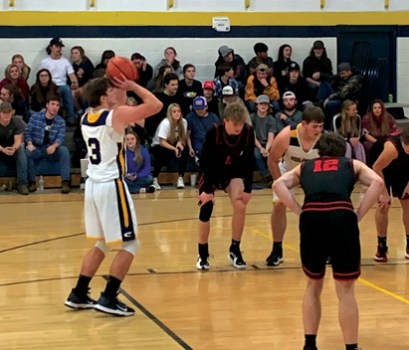 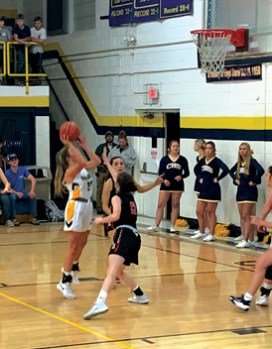 Star Photo/Austin Alexander A Cloudland Lady 'Lander puts a shot up toward the glass from the paint against Avery County.

BY AUSTIN ALEXANDER
STAR CORRESPONDENT
ROAN MOUNTAIN – On a chilly Tuesday night on Roan Mountain, the folks from just across the state line in Avery County made the trip to Highlander country.
Still very early in the season, all four varsity teams in play still showed they’ve got plenty of wrinkles to iron out. The Lady Highlanders’ struggles proved to be quite a small obstacle for themselves as they won 48-21, while a plethora of fouls and an inability to convert at the free-throw line doomed the boys.
The girls’ game started quite slow with sloppy play on both ends, but particularly with the Lady ‘Landers. After a six-point run to start the game for Avery County, Cloudland finished the quarter on a 9-0 run behind five points from Saharra McKinney and a pair of baskets from Karah Fields and Ella Benfield.
A massive 10-2 second-quarter lead from Cloudland made it 19-8 heading into halftime. Izabella Christman added three points with Benfield and Fields closing out the scoring for the half.
Coming out of the half, Christman dominated pouring in 16 second-half points giving her a game-high total of 19.
One of the most impressive plays of the second half came when Katie Baldwin dropped a dime of a pass to Benfield who would lay it in. Points from Ryan Turbyfill and Layken Blair rounded out the scoring as the Lady Highlanders crushed their way to a 48-21 win.
The boy’s game was much more competitive. Dylan Shell got the scoring going with an and-one. Caleb Sluder added another basket and the Highlanders took the early lead. An 8-0 run put the Vikings ahead, but a Dont’e Williams three made it 9-8 after one.
The Highlanders continued to carry momentum into the second quarter as they would retake the lead behind more big baskets from Dylan Street and Gage McKinney. A big three-pointer from Noah Barnett just before halftime made it 25-17 at the break.
Sluder would help maintain the lead for the Highlanders through the third with a six-point quarter and heading into the last frame, the ‘Landers led 33-28.
The biggest struggle for Cloudland all night was at the free-throw line. The inability to convert at a high rate kept Avery County in the game and the Vikings made them pay in the fourth.
After a McKinney three, the Vikings would go on a 9-1 run to go ahead by a point. After tying the game at 38, the Highlanders slowly let the game slip away until the final horn sounded and they had fallen, 49-43.