Hunter Elementary project could be first step toward consolidation 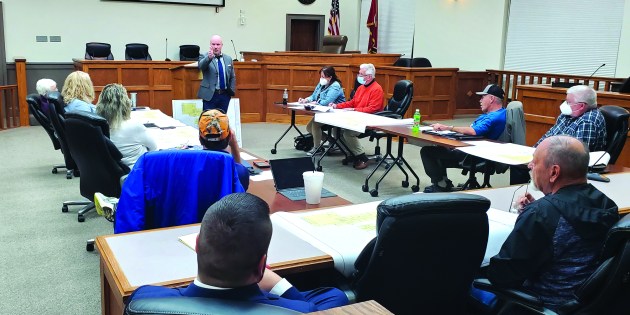 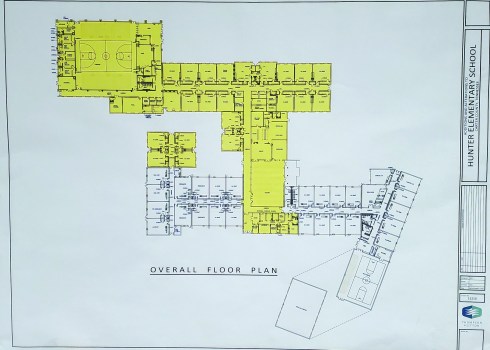 Star Photo/Ivan Sanders The floor plans for the Hunter School renovation was presented to members of the Carter County Education Committee Thursday.

BY IVAN SANDERS
STAR STAFF
ivan.sanders@elizabethton.com
A proposed $20 million renovation to Hunter Elementary would create the largest school in the county and allow for the closing of Keenburg and Unaka elementary schools.
The proposal was shared by Carter County Director of Schools Dr. Tracy McAbee at Thursday’s Carter County Education Committee meeting.
When completed, the K-8 school would be able to serve 925 students. Currently, the three schools have a combined student population of 905. McAbee said the new school “will have some room for growth” as a planned music room and science lab could be converted into new classrooms.
“The first quote was for $17 million but after the architects had interviewed several people with different skill sets, things began to pop up where we needed more room to accommodate the students,” McAbee said. “The cost right now is $20 million and the school will be the largest school in the county.
“There is a middle school section in the back which will be attached to the elementary school in the front. There will be a huge, new cafeteria up front and a new front entrance to the school. With the school, we wouldn’t have any portables or trailer.” Plans also call for a new gym.
McAbee said the project is spurred by a decrease in students and an increase in the cost of maintaining older schools in the county. “When we looked at numbers from 2019-2020 when the pandemic first started and 2020-2021 … we went down 141 kids and then 198 kids,” said McAbee. “Now, this year we have gone up with 85 of those back. Obviously, if those numbers keep going down there are going to be some schools with no kids in them.”
McAbee said ideally the project would be let for bids in April 2022 and completion could take two years or more due to supply chain issues.
The school district plans to use Elementary and Secondary Schools Emergency Relief funding for the majority of the project. The district has been approved for $10.5 million and, combined with funds already on hand, will be able to contribute $17 million. McAbee said the district does have deadlines for spending the funds, as well.
“This is also the last year we will be ‘held harmless’ for the 141 students lost in the 2019-2020 school year and the 198 students lost in 2020-2021. If they would have not held us harmless this year, we would have been in a world of hurt losing those kids. Next year we will not have a ‘held harmless.’
“We are pretty worried about having 250 fewer kids at about $8,500 a kid which means we are talking a little of over $2M. We need a fund balance of about $5M to feel comfortable over the next couple of years. The ESSER 3 money has to be spent first and then money taken from the fund balance.”
Commissioner Gary Bailey made a motion to send a $3.5 million request to the Financial Management Committee for consideration, whether through on-hand county funds or a low-rate bond issue.
Commissioner Mark Blevins seconded the motion. “The kids need this. For the last 41 years in Carter County, Stoney Creek has been promised a new school every time you turn around, and guess what, we don’t have a new school. I think it’s time Stoney Creek deserves a new school.”
Commission Chairwoman Ginger Holdren raised concerns about the plan being presented too early.
“This is a little premature to do this because the school board hasn’t made any decisions to do consolidation, so they have not made that stand,” Holdren said. “To bring it in here, and we ask for that contingency then we are the bad guys so to speak and I don’t think that is fair.
“I would like to see a contingency on any motion that the schools have to start closing and moving into this new school when it is complete, and I don’t understand why those savings can’t be applied to any deficiencies that the school system might have. What I am saying is when this is completed, the plan has to be other schools, and I guess the ones being mentioned are Keenburg and Unaka Elementary, move into this facility right away. To me, that’s the only reason that we are doing this.”
Commissioner Brad Johnson, who is not on the committee but was present, also asked for more detail in long-range plans for the schools.
“Where are the other school plans?” Johnson said. “What I am saying is put it in a plan where the second one is going to be built as soon as this one is done because our buildings are antiquated — they are at a point of being so old, it hinders our children from getting a proper education.”