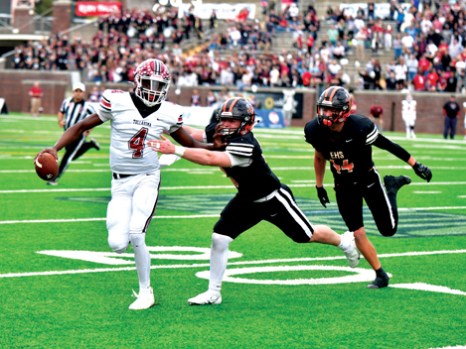 Star Photo/Ivan Sanders Elizabethton defensive back Eli Williams drives the Wildcat quarterback out of bounds during the first half. 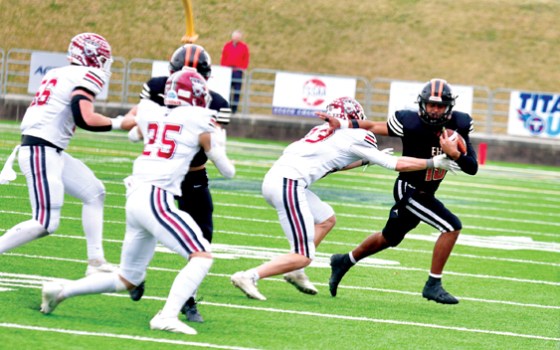 Star Photo/Ivan Sanders Bryson Rollins attempts to get outside the Tullahoma defenders. 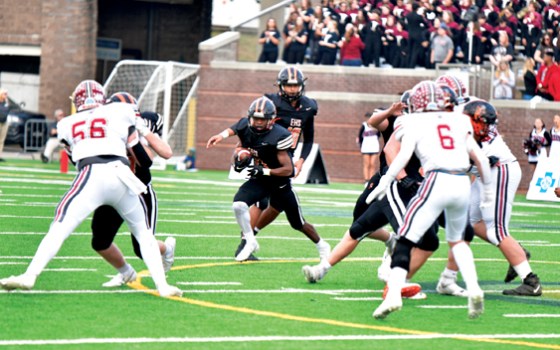 Star Photo/Ivan Sanders Nate Stephens eyes a hole created by his offensive line for a modest gain against the Wildcat defense. 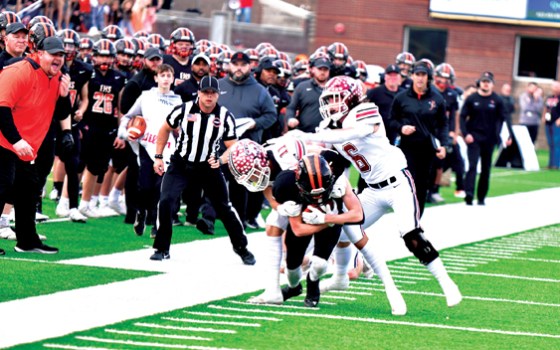 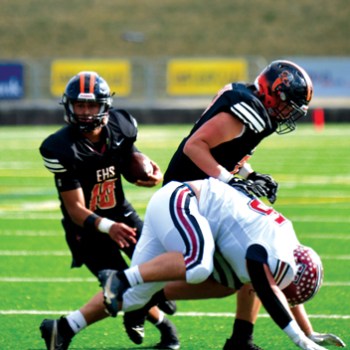 Star Photo/Ivan Sanders Bryson Rollins follows the block of his lineman for a first down. 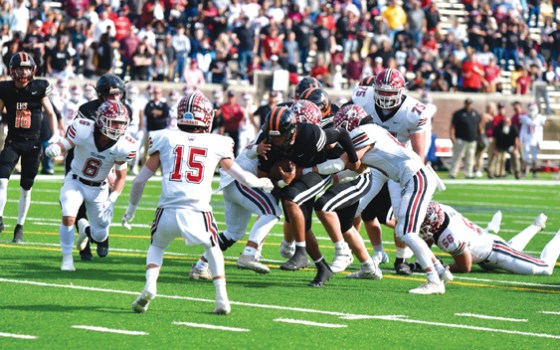 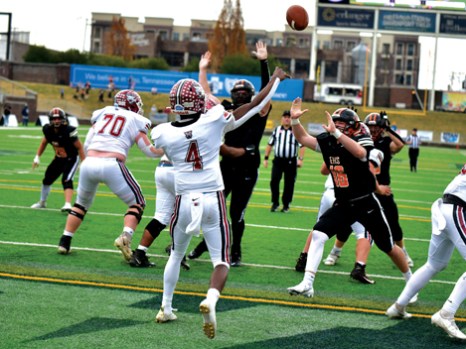 Star Photo/Ivan Sanders The Cyclone defense forces the Tullahoma quarterback to throw the football from his own end zone. 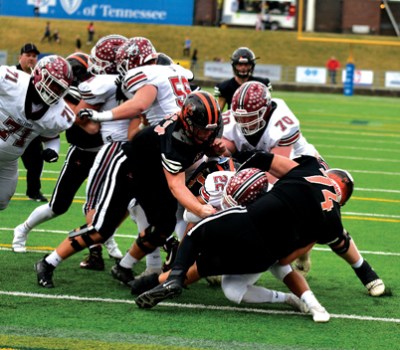 Star Photo/Ivan Sanders The Cyclone defense played stellar the entire contest as they stop the Wildcat running back just inches outside his own goal line. 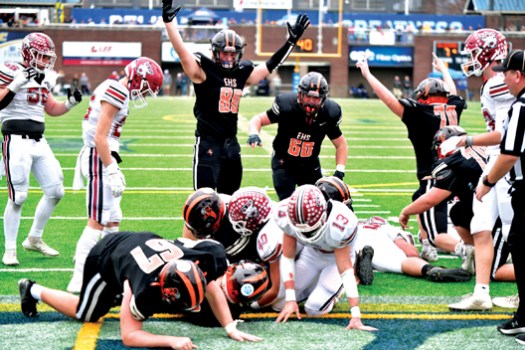 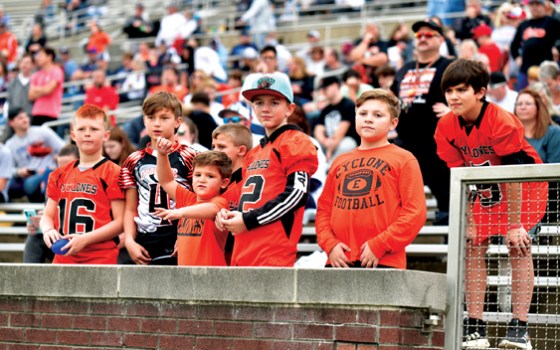 Star Photo/Ivan Sanders These young Cyclone fans keep a close eye on their Cyclones during the BlueCross Bowl Class 4-A Championship. 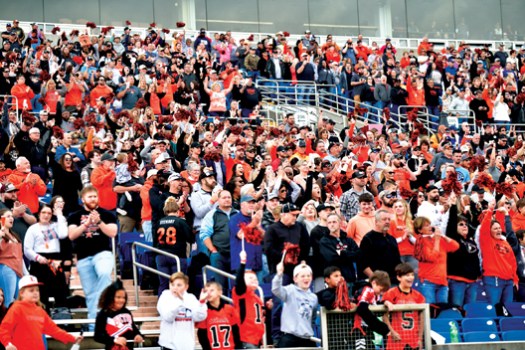 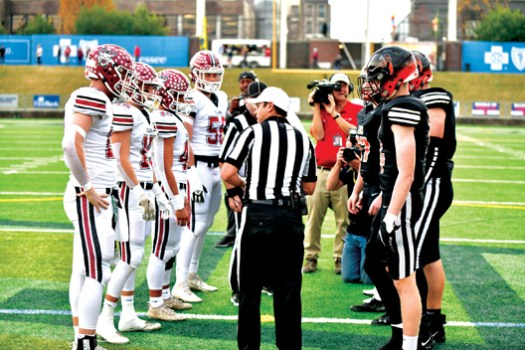 Star Photo/Ivan Sanders Captains meet at the center of the field for the coin toss. 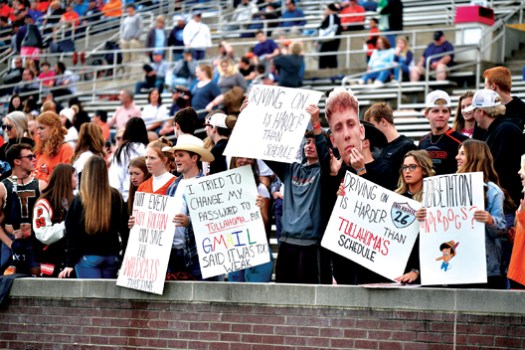 Star Photo/Ivan Sanders The Elizabethton student body came armed with an array of signage for the game. 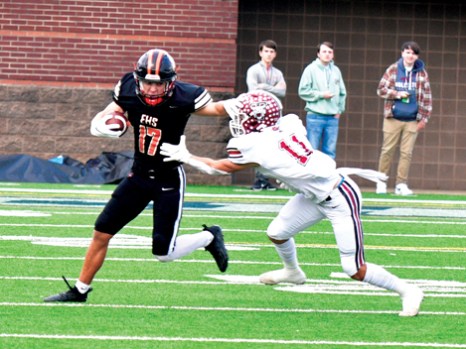 BY IVAN SANDERS
STAR SPORTS EDITOR
ivan.sanders@elizabethton.com
CHATTANOOGA – The Elizabethton Cyclones were chasing Northeast Tennessee history on Saturday in Chattanooga during the 2021 BlueCross Bowl Class 4-A Championship looking to become the only team from the area to win three straight state titles in football and only the sixth team in the modern TSSAA era to do so as well.
Standing in the way was the 14-0 Tullahoma Wildcats searching for their very first title in school history.
In a game that couldn’t be settled in 48 minutes of regulation or even one period of overtime, but the second overtime session saw Tullahoma go up by seven points and one last grasp to tie the game come up just fingertips short as Tullahoma intercepted a pass from Cyclone quarterback Bryson Rollins in the corner of the end zone intended for Jake Roberts to set off a wild celebration as the Wildcats sealed a 21-14 double-overtime victory.
The Cyclones finished as state runner-up after winning back-to-back titles in 2019 and 2020.
After a scoreless, physical first quarter of play, Tullahoma broke the ice first when Ryan Chadwick took the ball into the end zone from seven yards out for a 7-0 Wildcat lead after Justus Chadwick’s point after was good.
The Cyclones even the score with 4:31 left before half when Rollins found Roberts on a sizzling bullet from three yards out for the score. Sean Smithdeal’s PAT was straight and true and the game was tied.
Tullahoma had a chance to take the momentum just before the break but the Cyclone defense built a brick wall and held to keep the Wildcats out of the end zone from the one to take over possession of the football.
The second half was 24 minutes of gut-check football as each team had opportunities go by the wayside to see regulation end in a 7-7 tie forcing the first overtime.
Tullahoma won the toss and elected to go on defense first.
Running behind a heavy package, Rollins plunged over the goal line to stake the Cyclones to a 13-7 lead. Smithdeal’s kick was good and Elizabethton held the lead.
On its possession, the Wildcats wasted little time to even the score when Keishawn Cummings took the handoff and covered the 10 yards to the end zone for the tying score after Chadwick’s kick split the uprights.
The Wildcats got the ball to start the second overtime and took the lead when Jacob Dixon hauled in a five-yard scoring toss from Scott to take the 21-14 lead after Chadwick’s PAT.
With the game on the line, a no-gainer on first down on a Rollins run brought up second and goal from the 10-yard line. Rollins took the shotgun snap and lofted the ball toward the left corner of the end zone where the Tullahoma defender out jumped Roberts for the game-ending interception.
The interception brought to an end a successful run for the Cyclones that saw the Elizabethton squad post a record of 42-2 over the last three seasons including the two titles and the runner-up hardware to end the 2021 season.
For the contest, the Cyclones recorded 14 first downs and 300 yards of total offense. Tullahoma had 21 first downs and 337 yards total as the Cyclones ran 72 plays of offense to the Wildcats 49.
Rollins ended his stellar career as Cyclone quarterback with 35 carries good for 138 yards and a touchdown on the ground and completed 16-of-26 passes for 131 yards and a score. He had the one interception.
Eli Williams and Blake Stewart led the Cyclone defense with six and a half tackles apiece in the contest while Roberts added five and Caleb Johnson collected four and a half tackles.
The Cyclones possessed the football for 29:09 of the contest while Tullahoma had the ball 18:51.