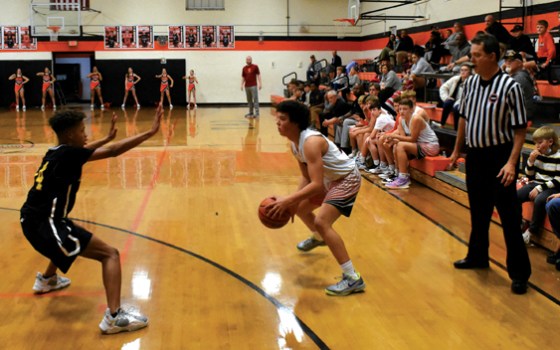 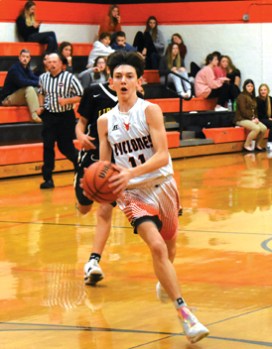 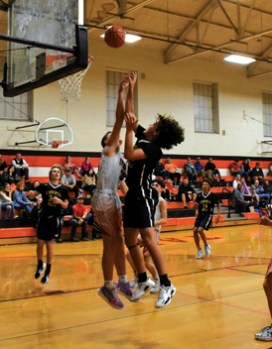 Star Photo/Carter Nagy Cyclone big man Jackson Buckles is challenged at the basket by a Liberty Bell player during varsity play on Monday. 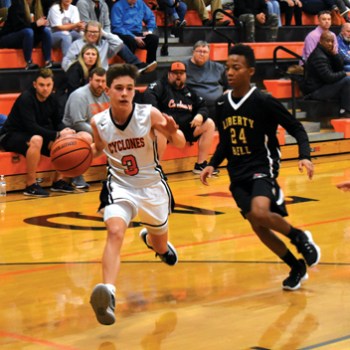 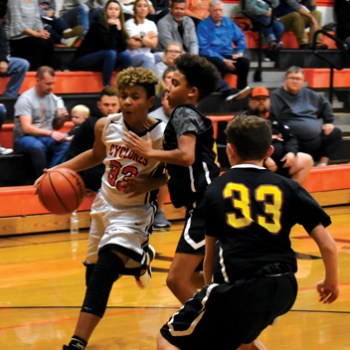 Star Photo/Carter Nagy Isaiah Adams is tightly defended as he pushes the basketball hard toward the goal. 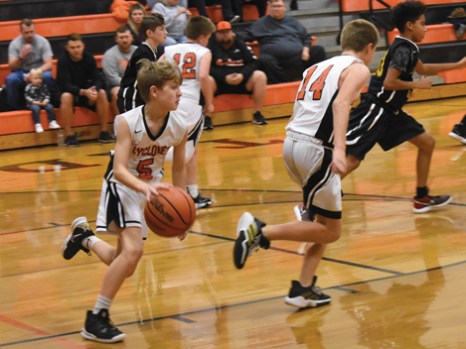 Star Photo/Carter Nagy Evan Chambers takes the ball up the floor for the Jr. Cyclone JV on Monday against Liberty Bell. 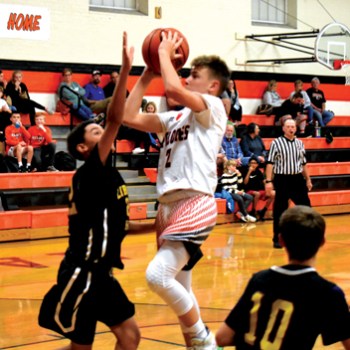 Star Photo/Carter Nagy Colby Blevins takes it to the rim for the Jr. Cyclones during varstity action on Monday.

BY CARTER NAGY
STAR CORRESPONDENT
The T.A. Dugger boy’s basketball team faced off against Liberty Bell Monday evening. The result was a nail-biter win.
Varsity
T.A. DUGGER………40
LIBERTY BELL…….34
At first, this game seemed like it was going to be a boring blowout judging by the first half of play.
In the first quarter, the Cyclone’s recorded eight points while keeping Liberty Bell scoreless in the period. Jackson Buckles recorded six of the team’s eight points.
In the second stanza, the Cyclones took a huge 18-4 lead. Making the game look like an easy win for the Cyclones as Justin Whitehead knocked down five of the 10 Cyclone points in the second.
The third quarter is when the roles reversed as the Patriots scored 12. The Cyclones scored 15 in the period to make the score 33-16.
Still, even though the cyclones had a large lead, things didn’t look great for the Patriots until the fourth and final quarter of play when the game became a nail-biter.
The Patriots were getting steal after steal with each one leading to points. The Cyclones were getting full-court pressed the entire period and quickly the Patriots started getting back into the game.
The Patriots put up 18 points during the run while the Cyclones only scored eight. The last few seconds consisted of fouls and fast breaks as the Cyclones were finally relieved after the buzzer went off with the scoreboard reading in their favor 40-34.
—
TAD, 40-34
Colby Blevins 12, Kaden Gouge 3, Justin Whitehead 10, Jaiden Wallin 4, Justius Wallin 5, Jackson Buckles 6.
Steals: Blevins 3, Jabriel Fain 2. Assists: Gouge 9. Rebounds: Gouge 8, Rhett Slagle 3, Justius Wallin 4.
Junior Varsity
LIBERTY BELL…. 35
T.A. DUGGER…… 27
Both teams started slow during junior varsity as the score at the end of the first was 6-4.
In the second the Cyclones were held to two points while the Patriots scored 15. The Patriots had gained a large 19-8 lead at halftime.
In the third the Cyclones played their A-game, scoring 11 and only allowing four points. Heading into the fourth the score was 19-23, Liberty Bell.
In the fourth, the period started slow but the Patriots started picking up the pace off a series of points in the paint, the Patriots put up 12 compared to the Cyclone’s eight.
The Jr. Cyclones fell short with the final being 35-27, Liberty Bell.
—
Liberty Bell, 35-27
T.A. Dugger
Brycen Blevins 6, Braylon Britt 8, Evan Chambers 6, Isaiah Adams 4, Caleb Waters 3.
Assists: Blevins 2. Rebounds: Britt 6, Chambers 4, Aiden Cole 2, Ryan Jones 2, Adams 4.