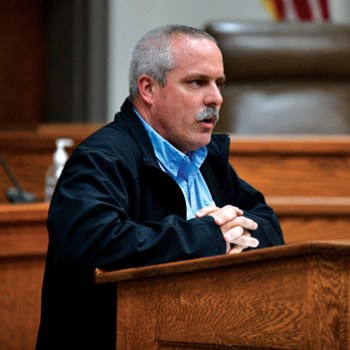 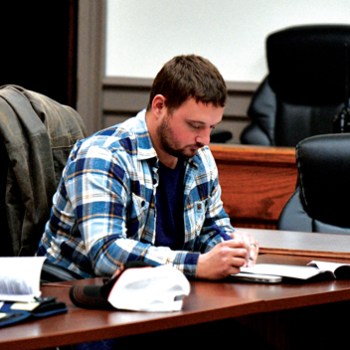 Star Photo/Ivan Sanders Budget committee chairman Austin Jaynes said that he felt that the $150,000 needed to be set aside so the fire department will be assured that the money will be there for their use in building a new station.

BY IVAN SANDERS
STAR STAFF
ivan.sanders@elizabethton.com
A $150,000 allocation from the Carter County Commission could make the difference for Hampton-Valley Forge Volunteer Fire Department’s efforts to build a new station.
The department recently purchased the old Street Antique Building at 3867 US-321 in Elizabethton, which currently houses the department. Hampton VFD Fire Chief Chris Isaacs asked the finance committee to consider the allocation, which would speed up the department’s efforts to demolish the current structure and rebuild.
“Whatever decision is made, we are going to build another building,” Isaacs said as he described having to use tarps and buckets to catch water when it rains. “We are asking for assistance to move up that timeline instead of us emptying those buckets upstairs of water for another two years, we are asking for assistance to move forward.
“I want everybody to know that if it is completely turned down and you laugh at me for walking in here, it’s not going to hurt our feelings. We are going to do it one way or another, whether we can do it this coming spring, one year from now, or two years from now. We are going to get it done.”
Though the current structure has a long history in the community, the building is in disrepair and not suitable for a fire station.  “It started out as a convenience store and had a gas pump in the front of it,” Isaacs said. “They kept adding to it, and on cold days you could go in and sit by the wood stove, get a drink out of the machine, and walk in the back end and get a pound of nails. And on the other side get you a pack of bullets. It was a place you could get about anything.”
The building was owned by the Street family and was damaged by fire. “It did sustain quite a bit of damage but they rebuilt it and they offered our fire department to park our fire truck in the basement, which was great,” Isaacs said. “We did that since the late ’70s at no charge to park in the garage. Over the years, we maintained that area and once the Streets no longer operated the store, it was rented out to an antique mall.”
The building was not maintained for many years, as the fire department did not want to invest in property owned by others. Eventually, the owners approached the department about purchasing the property. The department’s plans are to demolish the structure and build a new, block building with a four-bay garage and 12×12 doors and a 44-foot deep bay to accommodate a ladder truck if necessary.
Isaacs said the department still owes $50,000 toward the purchase and continues to raise funds for the rebuilding project. However, the county’s allocation of $150,000 would speed the process and allow the department to begin sooner.
Commissioner Aaron Frazier made a motion to approve up to $150,000 for the fire department to move forward. The full commission will consider the proposal on Monday.
Chairman Austin Jaynes concurred. “I see no issue with us going ahead and approving the money (even) if we have to wait to disperse it to them in the springtime or something, just so that they know the funds are there to give them some assurance. I applaud these gentlemen that volunteer to be firemen when we can’t even pay somebody to work.”
The fire department recently purchased the land where a new Simerly Creek station was built along with needed material for that project. The department will also be purchasing a used fire truck from Jonesborough for $25,000 that will help with the fire department’s ISO rating since they will be one engine short.
Isaacs said that the Hampton-Valley Forge Fire Department averages over 400 calls per year and provides coverage for other county and city fire departments when they are out on dispatched calls.