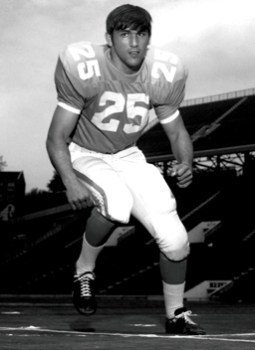 Photo Contributed Eddie Brown will be the guest speaker.

Eddie Brown played football at the University of Tennessee before going pro.

Brown attended Marion County High School in Jasper and graduated in 1970. At the University of Tennessee, he was a safety and punt returner. In 1973, he was team captain as a senior and was a first team All-America selection by Football News.

Brown was drafted by the Cleveland Browns in the eighth round of the 1974 NFL Draft. He was traded to the Washington Redskins during the 1975 season, and was an All-Pro and Pro Bowl selection during the 1976 and 1977 seasons.

In 1976, he led the National Football League in punt return yardage with 646 yards and was second in yards per return at 13.5. He also had a 71-yard return for a touchdown that season.

Brown returned to professional football in 1983 with the Chicago Blitz of the United States Football League. He had six interceptions, including one returned for a touchdown, that season. He played for the USFL’s Arizona Wranglers in 1984 and had two interceptions.

Brown was inducted into the Tennessee Sports Hall of Fame in 2002.

Along with Brown, County Mayor Patty Woodby will be attending as willTimothy Adkins, and the world famous Jarfly Dugger.

The banquet starts at 5pm with a meal. Admission is 15.00 for adults and 12.00 for students. Reserve tickets are requested and you can reserve on line at www.carterhalloffame.com. You may also contact Rob Fritts, Jamie Combs, Joe Sluder or Charles C.Y. Peters to reserve tickets.