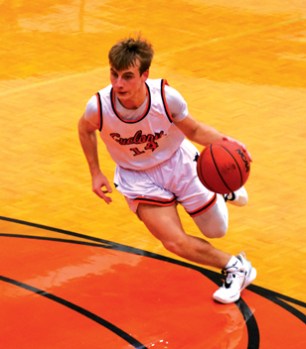 Star Photo/Carter Nagy Kaleb Hambrick pushes the basketball into the paint for the Cyclones against the Longhorn defense. 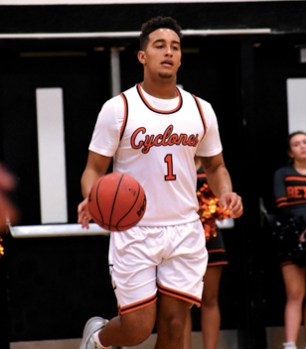 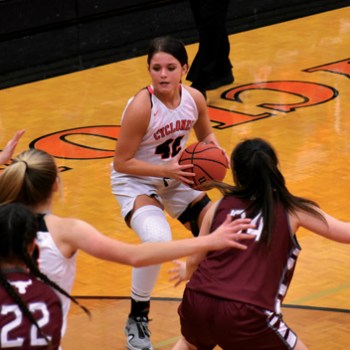 Star Photo/Carter Nagy Reiley Whitson looks to push the basketball inside for the Lady Cyclones. 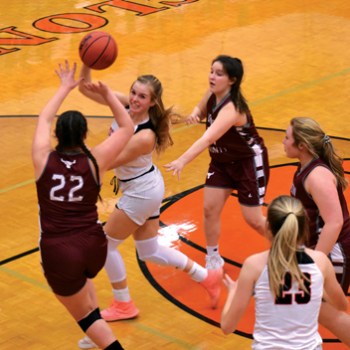 Star Photo/Carter Nagy Lady Cyclone Renna Lane attempts to dump the basketball inside to a teammate. 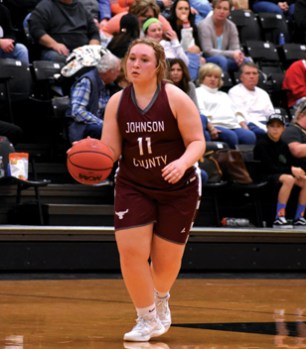 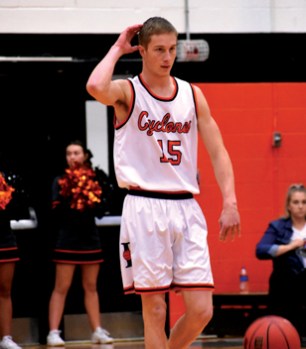 BY CARTER NAGY
STAR CORRESPONDENT
Girls
Elizabethton….66
Johnson Co. ….31
The Elizabethton Lady Cyclones and Johnson County Lady Longhorns had what seemed like it was going to be a close game during the first quarter. The Lady Cyclones quickly gained a lead off of a handful of three-pointers taking a 17-10 lead at the end of the first period of play.

Going into the second quarter, the Lady Cyclones kept rolling as they scored 26 and only allowing the Lady ‘Horns 11 points. The score was 40-21 at halftime Elizabethton.

In the third, both teams slowed the pace and had a low-scoring quarter. The Lady Cyclones won the period 9-4.

In the fourth, the Lady Longhorns couldn’t come back from the deficit they were facing. The Lady Cyclones walked away with a 66-31 blowout win.

BOYS
Double Overtime
Johnson Co. … 101
Elizabethton .. 85
The Cyclones and Longhorn’s game was a different story than the girl’s game. Although, one familiar thing that happened was the Cyclones opened the first quarter scoring 17 on the Longhorns while only allowing nine points to the visitors.

In the second quarter, Johnson County brought their A-game, scoring 26 on the Cyclones. The Cyclones realized they had a real game on their hands. The score at halftime was 35-31, Longhorns.

The third quarter was a shoot-out with both teams draining jump shots and getting steals which led to fast-break layups. Once again the Longhorns outscored the Cyclones by scoring 21 while allowing 17.

The fourth is where this game got interesting as the Cyclones played terrific defense which helped their offensive game tremendously. Off a barrage of three-pointers and mid-range shots, the Cyclones put this game into overtime with the score 68-68 at the end of regulation.

In the first overtime, the Longhorns earned almost all their points in the paint while the Cyclones stuck to a mixture of layups and jump shots. Both teams were fouling and getting fouled, with a mixture of fouls slipping the eyes of the refs, making fans of both teams irate either way, this game was going into double-overtime. Each team scored 14 in the first overtime.

Elizabethton’s Jake Roberts had 20 points before fouling out. Johnson County’s Preston Greer had a whopping 41 points, taking game and team-high accolades for the contest.