Hampton pulls away in closing moments to defeat South Greene 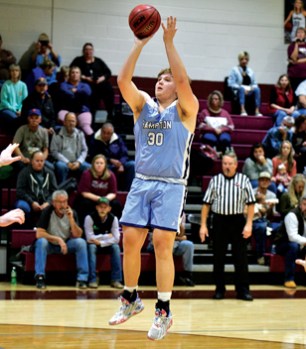 Star Photo/Ivan Sanders Hampton's Conor Burleson pulls up for a jumper just inside the three-point arc against South Greene. 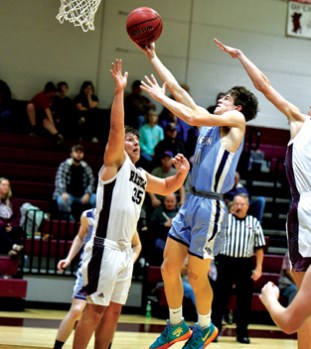 Star Photo/Ivan Sanders Hampton's Cadon Buckles goes in for a finger-tip layup as he is challenged by South Greene's Luke Myers. 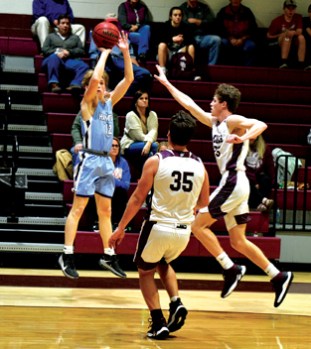 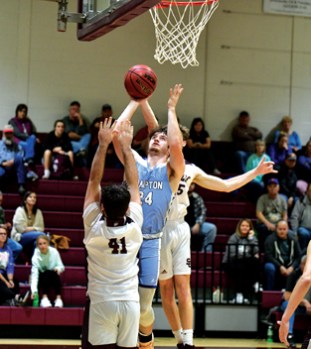 Star Photo/Ivan Sanders Morgan Lyons goes up for a shot against a tough Rebel defense. 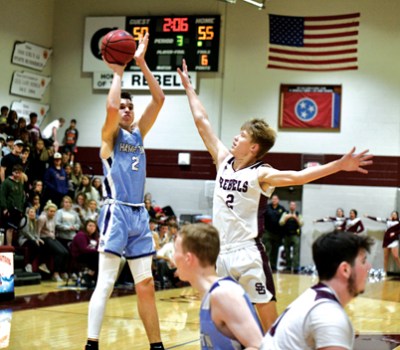 Star Photo/Ivan Sanders Michael Harrison pulls up for a short-range jumper over the South Greene defense. 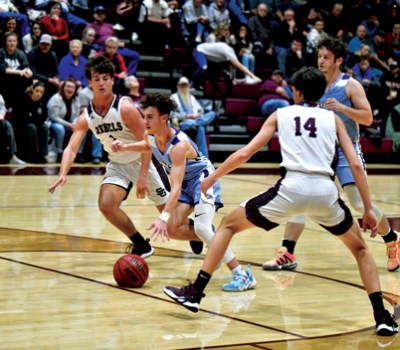 Star Photo/Ivan Sanders Isaiah McCoury splits a pair of defenders as he heads straight down the lane toward the basket. 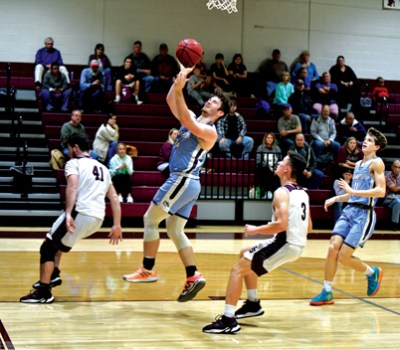 Star Photo/Ivan Sanders Morgan Lyons beats the Rebel defense on his way for a layup and two points. 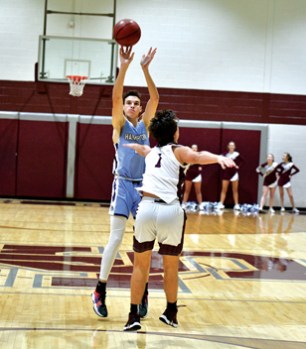 Star Photo/Ivan Sanders Michael Harrison puts up a three-ball against the defense of Clint Lamb of South Greene. 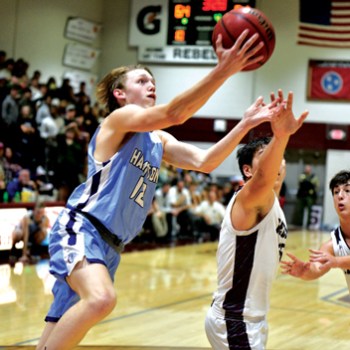 Star Photo/Ivan Sanders Dalton Holtsclaw takes the ball on the run to the rim.

BY IVAN SANDERS
STAR SPORTS EDITOR
ivan.sanders@elizabethton.com
GREENEVILLE – After a first-half scoring blitz by both Hampton and South Greene in boys action resulting in a 42-42 halftime draw, both team’s defenses settled in the second half.

The result was an 80-73 Bulldog win in one of the toughest gyms for a visiting team to play in at South Greene High School.

The defense was nowhere to be found in the opening half as both teams resembled a bunch of greyhound dogs running and gunning up and down the floor.

Clint Lamb took the Rebels offense on his shoulders in the half as the shifty guard made penetration into the lanes on numerous occasions to draw fouls against the ‘Dog defenders as Lamb scored 15 first-half points to lead South Greene including 9-of-12 from the foul line.

Michael Harrison countered for Hampton as the senior scored nine points to lead the ‘Dogs in the half. Cadon Buckles and Conor Burleson dropped in seven points each while Dalton Holtsclaw netted six on two treys.

After a quick-paced first half, things slowed down in the third quarter as South Greene managed to work their way to an 18-12 quarter to take the six-point lead to the final quarter of play. Hayden Hartman’s two treys set the tone for the Rebels as Hampton was stuck on 50 points for a span in the quarter before finally scoring a bucket with a few ticks of three minutes left on the quarter’s clock.

Holtsclaw and Burleson added four more points each to their scoring log for the night to keep the Bulldogs within firing range of the Rebels.

With a little fire under their engines, the Bulldogs came out and owned the floor on both ends as the defensive pressure intensified as Hampton outscored the home team 26-13 in the period to pull out the win.

Holtsclaw, Logan Whitehead, and Morgan Lyons played contributing roles in the period as each ‘Dog scored six points to help push Hampton to the win.

Four ‘Dogs reached double-figuring scoring in the contest led by Holtsclaw’s 16 points. Burleson finished with 14 points with Whitehead and Lyons finishing with 12 and 11 respectively.

Lamb finished as the game-high scorer with 25 points in the loss. Myers was the only other Rebel in double figures as the senior added 15 points.

Whitehead almost claimed a double-double as he led Hampton on the glass with nine rebounds. Lyons finished with five boards while Burleson and Isaiah McCoury were credited with four rebounds apiece. McCoury also collected four steals and four assists in the game.

“The first half, we came out and just didn’t get down low and play defense,” said Hampton head coach Ned Smith. “I thought we were reaching and grabbing and not playing good defense. In the second half, I thought we played better defense and turned it into some offense.

“We finally got the tempo up to where we wanted it in the last five minutes and the kids never gave up and played hard. We’ve got six seniors and I thought they handled the pressure well.”

Hampton boys will be entertaining Johnson County for a trio of games on Friday as the freshmen play at 3 p.m., the junior varsity at 4:30 p.m., and the varsity at 6 p.m. There will be no girl’s game Friday night at Hampton as the Lady Bulldogs are participating in the Arby’s Classic in Bristol.