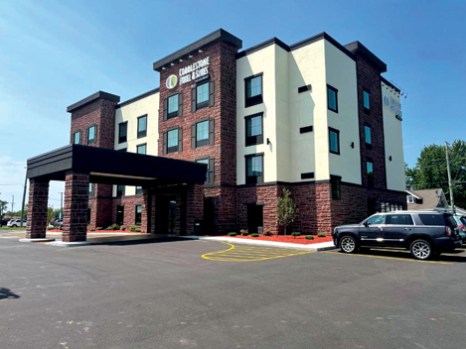 Photo Contributed A Cobblestone Hotel in Little Chute, Wisconsin. The Cobblestone Group has received an extension on a TIF application through the Elizabethton Housing and Development Agency.

Developers have been granted another tax incentive extension for the construction a new hotel in Elizabethton, and officials are hopeful the project will be viable.

“They still want to have the hotel, but when Covid-19 happened and the price of materials and labor went up, the investors had some concerns if there would be enough people traveling to support the hotel due to the pandemic,” said Kelley Geagley, executive director of the Elizabethton Housing and Development Agency. “We are just waiting on the investors to say hey we are ready to do it.”

Geagley’s agency is the go-between in the process with the developers and the banks. Cobblestone Hotels, based in Neehan, Wisconsin, first proposed the construction of a 54-room upper-midscale hotel with a pool in 2017.

Geagley said the project has lost footing due to Covid-19 and former Elizabethton City Planner Jon Hartman moving on to another position. Hartman played a large role in the negotiations with the group to locate the hotel in Elizabethton on property behind Walmart.

“The city has never wavered and we haven’t wavered. It was a perfect storm in a bad way. I could see us breaking ground right away and then Covid hit. Andrew McKeehan with Carter County Bank made perfect sense when he said with Covid-19 nobody is going to be traveling and no one would want to build a hotel in that situation,” Geagley said.

The tax increment incentive monetizes the present value of on incremental property tax revenues to assist with project costs when borrowing is involved.

The contract that was signed has a fee associated with it and is good for a year.