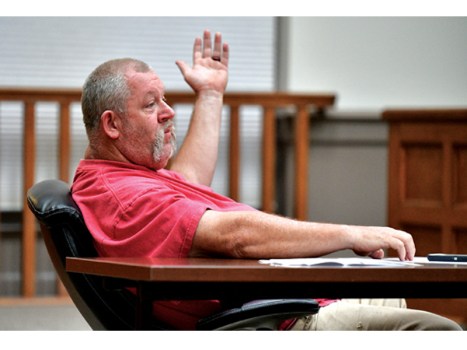 Carter County needs to expand its landfill before it reaches the end of its lifespan, according to members of the Carter County Landfill committee.

The issue was discussed at the group’s December meeting.

“Mrs. (Kelly) Collins brought up an important idea about expanding the landfill instead of having to close it,” said Mark Tester, District 3 commissioner. “In order to do that … we are going to have to increase our fees, but if we do that I want to see that increase designated for the purchases of land and closing the landfill.”

Tester said the landfill issue will become critical within 10 years. “We are at the point, in six or seven years we are going to be in trouble.”

He suggested adding a $1 per ton fee and saving those fees for use toward the purchase of new land for the landfill.

Customers currently pay $52 per ton, a fee that was raised in the past year. Some members of the commission believe this fee is too low.

Tester told the Landfill Committee his sister had rented a roll-off dumpster from Waste Management and had to pay $197 for rental and then $68 for every ton of waste that was hauled from her property.

“Our rate is $52 and Benny (Lyons) talked to somebody else and they said their rate was $72 and they couldn’t see how we were doing it on $52,” said Chairman Gary Bailey. “All of you are right. There is coming a time that we are going to have to shut it or buy land.”

Lyons, the landfill director, said an adjacent parcel toward the Highway 91 side of the landfill could possibly be acquired for expansion,

“I don’t know the acreage on it,” Lyons said, adding that he would recommend investing in surveys and tests to make sure the land would pass TDEC requirements before purchasing it. “If they go in there and drill and find a cave that would end it right there.”

Lyons also said approximately 140 tons of garbage per day are hauled from the Carter County Landfill and taken to Blountville for disposal.

“We can’t sit on our hands,” said Carter County Commission chairwoman Ginger Holdren. “We have to move. We would have to take county money and buy it and put it back in with your dollar increase.”

The committee voted unanimously to ask the county attorney to explore options to purchase the adjacent land.