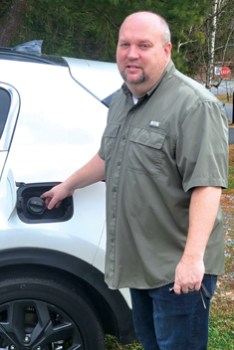 Star Photo/Ivan Sanders Jason Cardin from Athens was surprised at the difference between gas prices in Elizabethton compared to what he paid on Christmas morning in Athens of $2.77 per gallon at a Ingles Gas Station with no discounts. 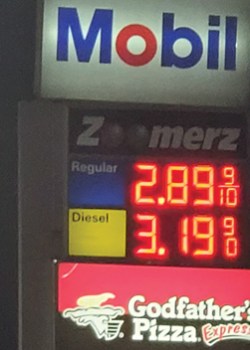 Star Photo/Ivan Sanders While covering a basketball game two weeks ago, gas prices in Greeneville were already at $2.89 per gallon while in Elizabethton the price was $3.04.

Gas prices fell on average another 1.5 cents this week bringing the Tennessee Gas Price average to $2.99 per gallon, although prices are dropping more slowly in Carter County.

According to AAA, the decline comes on the heels of the fear of the Omicron-driven economic slowdown coupled with news of a severe fire at the Exxon Mobil Corp. refinery in Baytown, Texas, last Thursday that injured four people.

The refinery is one of the largest refining and petrochemical facilities in the United States.

“We should learn more in the coming days about the extent of the damage to the refinery,” said Stephanie Milani, Tennessee Public Affairs Director, AAA. “If it can be back up and running in a few weeks, the effect could be minimal. But if repairs take months, consumers could begin seeing higher prices again at the pump.

“If the damage forces the plant offline for long, the disruption could push gasoline prices higher. Before the fire, the national average had declined steadily. Now the decline has slowed, but the national average for a gallon of gas still fell two cents on the week to $3.28.”

The drop in prices is one center cheaper than last month but still 95 cents more than this time last year according to AAA.

The higher prices in Carter County have made some travelers who came home for Christmas wonder why prices are cheaper in outlying areas less than what they are in the county.

“I filled up at an Ingles gas station in Athens and it was $2.77 on Christmas morning without any discounts,” said Jason Cardin, who came to Carter County to celebrate Christmas with his wife’s family. “It would make me want to stretch my gas a little further to see if I could get back to a gas station down the interstate in Greene County.