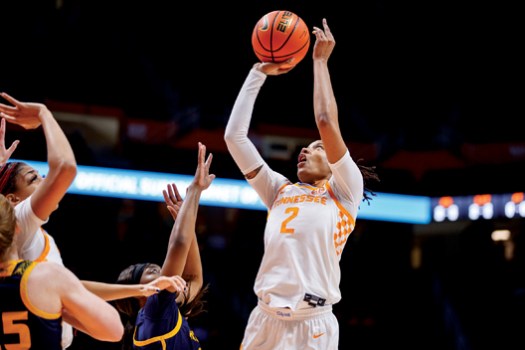 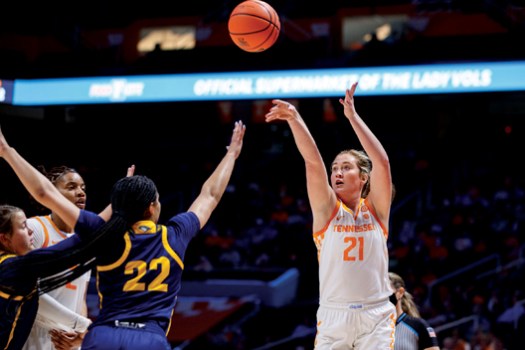 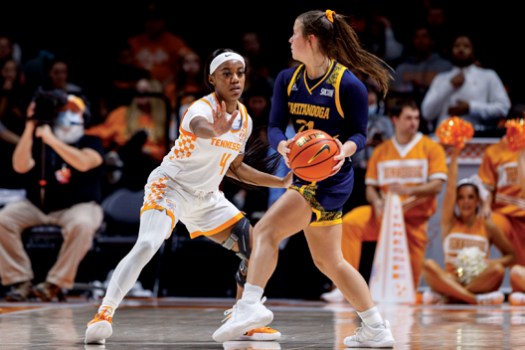 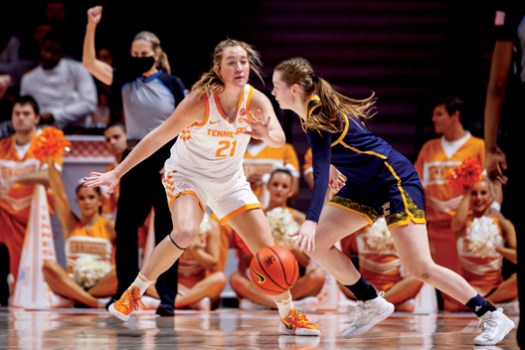 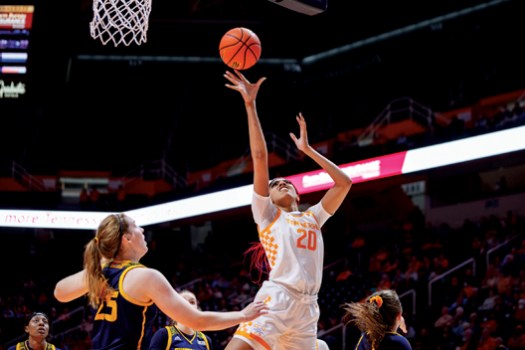 CONTRIBUTED BY UT ATHLETICS
KNOXVILLE – Tennessee took a comfortable victory over Chattanooga on Monday, winning in Thompson-Boling Arena, 91-41. Tennessee (11-1) was led by junior Tamari Key with 18 points and seven rebounds. Graduate Alexus Dye and freshman Karoline Striplin were also in double digits with 15 and 12, respectively.

Amaria Pugh was the high scorer for Chattanooga (2-12), logging 17 points on the night. Sara Puckett scored the first points of the game, knocking down a trey 11 seconds into play. Tess Darby followed it up with a 3-pointer on the next possession, and Dye hit buckets on back-to-back plays to give the Lady Vols a 10-0 lead before UTC got its first basket off a Pugh layup at the 7:08 mark.

Key answered with six straight points, fueling a 12-3 run over the next seven minutes to give Tennessee a 22-5 lead at the end of the first. Dye opened the second period with a jumper and the teams traded buckets before Dye and Key combined for nine straight points to make the score 38-10 with 3:49 left in the half.

Pugh responded with a three for Chattanooga to set off an 8-0 run that cut UT’s lead to 20 by the 2:22 mark, but the Lady Vols outscored the Mocs 5-1 in the closing minutes to take a 43-19 lead into halftime.

The Lady Vols opened the third quarter with a 10-0 run capped off with a trey by Darby to extend UT’s lead to 55-19 three minutes into the half. Brooke Hampel ended the run with a layup that would prove to be one of just two field goals the Mocs knocked down in the quarter.

The rest of Chattanooga’s points would come from the free-throw line, as UT closed out the period by outscoring the Mocs 16-7 to send the game into the final stanza with a score of 71-28.

Emily Saunders opened the scoring in the fourth with back-to-back buckets, as Tennessee launched into a 12-1 run that spanned four minutes. Two layups by Striplin gave Tennessee its largest lead of the game at 87-31 with just under four minutes left in the game before the Mocs answered with an 8-0 run to cut the score to 87-39 by the 1:57 mark.

Saunders hit a pair of free throws and Jessie Rennie scored on a fast-break layup to stretch the lead back to 52 before UTC hit the last bucket of the game to make the final score 91-41.

UP NEXT: The Lady Vols will begin conference play on Thursday, hosting Alabama in a 6:30 p.m. ET match-up that will be streamed on SECN+.

HAPPY TO ASSIST: The Lady Vols dished out a season-best 30 assists on 37 field goals against UTC. Tess Darby and Sara Puckett each set new career highs with six and five, respectively, while Brooklynn Miles tied her career high of six and Jordan Walker set a season high of eight. It marked the first time Tennessee had 30+ assists since recording 38 on Dec. 6, 2017, in a 131-69 win over Troy.

THREE FOR THREE: Three different Lady Vols found success from behind the arc against Chattanooga. Tess Darby led the way with three treys, Brooklynn Miles knocked down two and Sara Puckett hit one. Puckett has now hit at least one 3-pointer in 10 of 12 games this season.

STRIPLIN FINDING HER GROOVE: Freshman Karoline Striplin upped her career high in points for the second straight game, pouring in 12 points while also setting a career high of nine rebounds.

BACK-TO-BACK FIFTY PIECES: Tennessee recorded its second straight victory by 50 or more points, with a 54-point win on Dec. 20 vs. ETSU and a 50-point triumph over Chattanooga. The Lady Vols hadn’t pulled off that feat since defeating Alabama State by 53 and Troy by 62 on Dec. 3 and 6 of the 2017-18 campaign.