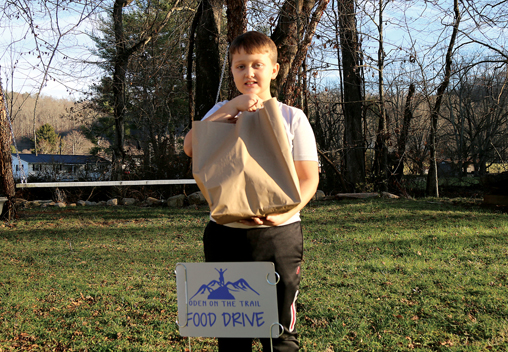 Star Photo/Nic Miller Oden Parlier, also known as "Oden on the Trail," looks to make a change within the community as well as provide entertaining content for his viewers.

Oden Parlier may be known for his YouTube videos, but the young social media star is also known for helping out the less fortunate in his community.

Parlier, a 10-year-old Hunter Elementary student, has more than 400 subscribers on his “Oden on the Trail” YouTube channel, a page where he records hiking videos, gear reviews, and even interviews of famous Appalachian Trail Hikers.

But he also hosts an “Oden on the Trail Food Drive.”

Earlier in the year, Parlier had hoped to feed 100 people, a goal that the YouTuber easily surpassed.

“We recently donated all of the food that we collected, and we donated enough to feed around 1,000 people,” he said. “We also filled up the blessing box at my school, and we are going to donate more as soon as there is enough room.”

This year was the second year of Parlier’s food drive, which fed 300 people in 2020.

“My favorite part about being able to donate food to people is knowing that less people are going to be hungry,” Parlier said.

Donations have finished for this year’s drive, and Parlier said that they will kick things off for 2022 in October.

“We will have another Facebook fundraiser when we start doing donations again, and we will also make some drop off points when the time comes,” said Parlier. “You can also follow my social media’s Facebook, Instagram, and YouTube at ‘Oden on the Trail’ for more updates.”