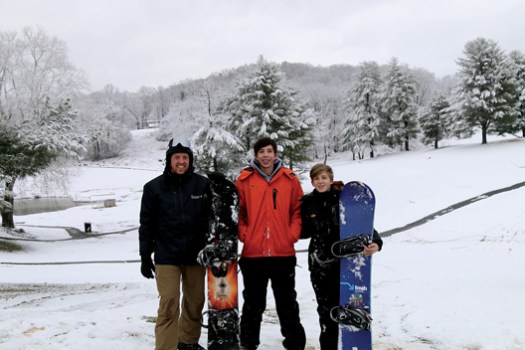 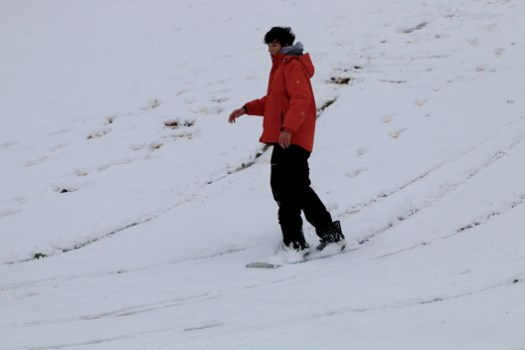 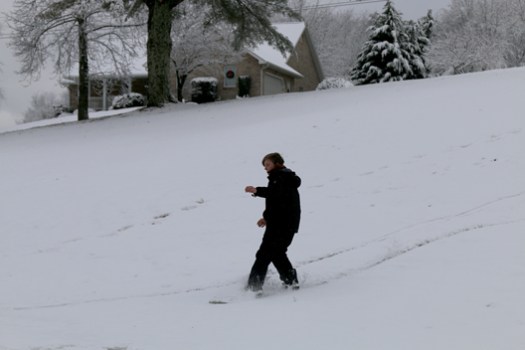 Star Photo/Nic Miller Harrison Hobbs begins to slow down after reaching the bottom of a slope at the Elizabethton Golf Course. 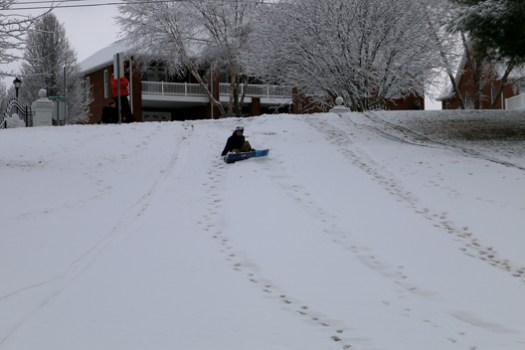 Star Photo/Nic Miller Tim Hobbs laughs off a fall coming down a hill on a snowboard at the Elizabethton Golf Course.

Just over a week after many members of the community were met with a Christmas full of green grass, Elizabethton and Carter County had its first snow day of the winter season.

As in most places in the southern region of the country, snow days in the area are filled with fun adventures in the fluffy, wintery mixture such as sledding, snowboarding and just enjoying the weather.

“We recently moved back to the area from Georgia, so we didn’t get that much snow down there,” said Jackson Hobbs, one of the many people in Elizabethton enjoying fun in the snow on Monday morning “So it is so good to be out here and to be able to enjoy this when we can.”

“We would occasionally go up to Beech and Sugar Mountain to snowboard up there, but since there is snow all over town we wanted to enjoy it,” said Hobbs.

Hobbs and his brother Harrison as well as their father Tim took advantage of the Elizabethton Golf Course, whose hills provided for the perfect snowboarding experience for the family.

“My favorite part about coming outside and doing something like this is just to be able to have a fun experience with my family and to be able to be a kid,” said Hobbs.

And while many people were enjoying the snow day, the Carter County Highway Department was hard at work making sure that residents could travel during the day.

“When it first started snowing, we brought our trucks out on the road around 6:30 this morning to start pushing the snow off,” said Highway Department Superintendent Roger Colbaugh. “It was coming down pretty heavy, but the ground was warm enough where it did not freeze down.”

“Roan Mountain and in the areas of the county around Elizabethton was about the same, and it was all slush so it was not too bad. We have had a few trees come down from this storm, with one on Old Railroad Grade Road in Roan Mountain, one on Tester Road and on Cripple Creek Loop,” said Colbaugh.

Colbaugh said that the Highway Department is hoping to get most of the snow off the roads today so there is no black ice on the roadways Tuesday morning.