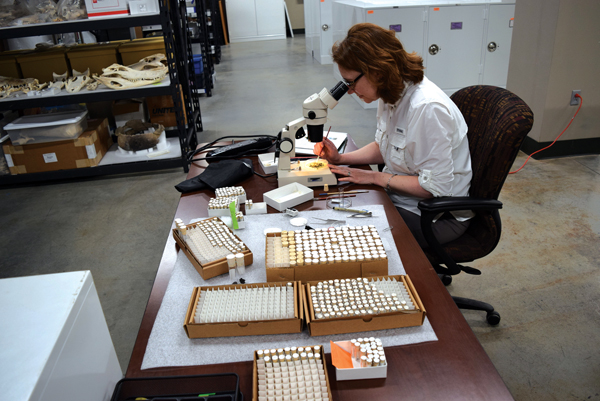 Dr. Elizabeth Hermsen, research scientist, has identified 13 fossil seeds of the extinct passion flower. The seeds were discovered at the Gray Fossil Site.

For Tennesseans, passion flowers are a point of regional pride, officially designated as a Tennessee state flower back in 1919. Now, a century later, paleontologists have found fossil evidence of an extinct Appalachian passion flower species, Passiflora appalachiana, previously unknown to science.
This ancient species is unique to the fossil record of Tennessee, museum officials said, and it is proof that these flowers have adorned the local landscape for millions of years.
The fossils were found at the Gray Fossil Site, overseen by the Don Sundquist Center of Excellence in Paleontology at East Tennessee State University. Located in northeastern Tennessee, this site preserves an ancient ecosystem from the early Pliocene Epoch, nearly five million years old, including fossil remains of rhinos, red pandas, alligators, mastodons and more. Since the site’s discovery in 2000, researchers have identified several extinct species of plant that are new to science, including species of grapevine, hickory, winter hazel and now, passion flower.
The new species was described by Dr. Elizabeth Hermsen, research scientist at the Paleontological Research Institution in Ithaca, N.Y., in a recent study published in the International Journal of Plant Sciences, in a special issue celebrating women in paleobotany, the science of fossil plants.
In the new study, Hermsen identified 13 fossil seeds of the extinct passion flower, each only about six millimeters long. These seeds were discovered at the Gray Fossil Site thanks to the dedicated work of site staff and volunteers to separate tiny fossils from the ancient sediment, museum officials said.
Comparing the structure of these seeds to modern and ancient relatives, Hermsen identified them as a type of passion flower. But since they don’t quite match any known species, she classified them as a new species. These extinct seeds are most similar to the purple passion flower or maypop, Passiflora incarnata, which lives in Tennessee today.
“The purple passion flower is widespread in the eastern United States today and is somewhat weedy,” Hermsen said. “Thus, the Gray Fossil Site passion flower seeds indicate that this hardier passion flower lineage was probably established in eastern North America by the Pliocene Epoch.”
Passion flowers are numerous today, mostly found in the American tropics, but they’re rare in the fossil record. These ancient Appalachian passion flowers are the first confirmed report of fossil passion flowers from all of eastern North America. They also provide a rare tropical flavor to the Gray Fossil Site flora.
“Many Gray Fossil Site plants have northern hemisphere distributions in the fossil record, occurring in North America, Europe and Asia. Furthermore, they often live in North America and eastern Asia today,” Hermsen said. “Passion flowers are currently most diverse in South America, with very few species native to eastern North America and eastern Asia, and the Gray Fossil Site seeds do not appear to have a relationship to the Asian passion flowers.”
Hermsen suspects these ancient passion flowers might have spread into North America from ancestors in warmer southern regions, an unusual scenario for plants of the Gray Fossil Site. This new species expands scientists’ understanding of the complicated ways that ecosystems have shuffled and reorganized over the past several million years.
More than 100 different types of plants have been identified from fossil seeds and pollen at the Gray Fossil Site, though many still await detailed study. Hermsen is currently engaged in research on more of these plants, and she suspects there are more new species to be discovered.
“Honestly,” she said, “I wish that I had more time to work on the whole flora.”