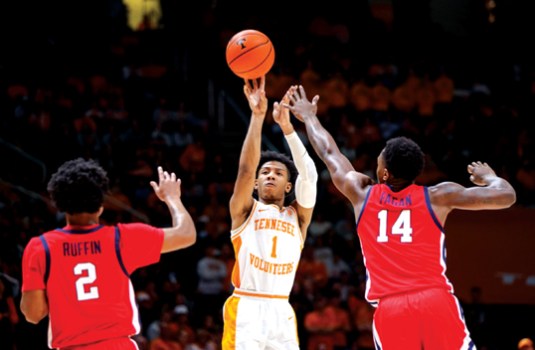 Photo by Caleb Jones/UT Athletics Vols freshman guard Kennedy Chandler puts up an outside shot against a pair of Ole Miss defenders. 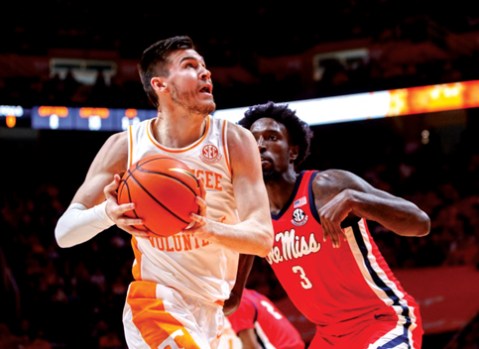 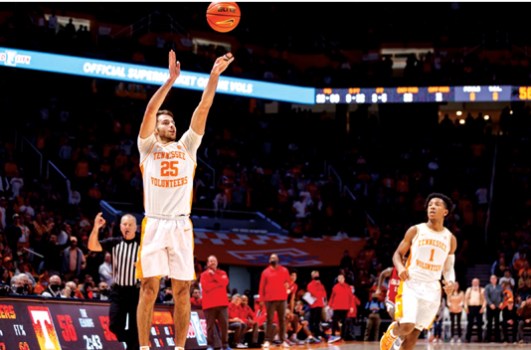 Photo by Caleb Jones/UT Athletics Tennessee guard Santiago Vescovi pulls up for one of his three pointers in an overtime win over Ole Miss.

CONTRIBUTED BY UT ATHLETICS
KNOXVILLE – Clutch 3-point shooting late in regulation and a strong offensive overtime pushed the 18th-ranked Tennessee Volunteers past Ole Miss, 66-60, Wednesday night at Thompson-Boling Arena.
The Volunteers (10-3, 1-1 SEC) made four consecutive 3-pointers to tie the game at 51, late in regulation. Tennessee did not take its first lead of the night until overtime, when Olivier Nkamhoua drained a jumper 18 seconds into the extra frame.
The Vols offense clicked in overtime, making 5-of-6 shots from the field, 2-of-3 from beyond the arc and 3-of-3 from the free-throw line.
Tennessee totaled 17 steals, its most in a game since it had 21 on Dec. 23, 2009, against North Carolina A&T, and its most in an SEC game since Feb. 21, 2007, when the Vols had 18 against Alabama.
It was the eighth time this year UT posted double-digit steals as a team. The Vols have swiped 10+ in both games of SEC play thus far.
Santiago Vescovi came through in the clutch for the Big Orange, exemplified by his “and-1” 3-pointer with 3:39 left in the game to jumpstart a Tennessee comeback.
Following that 4-point play, he then sunk another three to tie the game with 1:10 left, that number would hold for the remainder of regulation. Fifteen of Vescovi’s 17 points came in the second half or overtime.
Vescovi led all Vol scorers with his 17. Nkamhoua finished with 13 points on 5-of-7 shooting. Josiah-Jordan James added 10 points and led the team in rebounding with eight.
Zakai Zeigler had a career-best five steals, Kennedy Chandler had four takeaways and Vescovi had three.
Ole Miss (8-5, 0-1 SEC) was led by Tye Fagan, who scored 23 points on 8-of-11 shooting. Fagan was 7-of-7 from the floor in the second half, with four of the field goals coming from 3-point range.
Matthew Murrell scored 17 for the Rebels.
Tennessee overcame a 12-point deficit in the win, its first double-digit comeback of the season. The rally was fueled by offensive rebounds, as the Vols out-rebounded the Rebels 11-5 and 7-1 in the second half.
Defenses owned the first half of the game, as the night’s first point wasn’t scored for 4:12. The half ended with Ole Miss leading, 21-19. Tennessee forced the Rebels into 11 first-half turnovers; seven were steals, while six different Vols logged a takeaway.
The 40 combined points stood as the lowest total in a first half of any Tennessee game this season, but the UT offense started to find a groove late, making 5-of-8 to finish the half.
Tennessee is back in action Saturday when it faces No. 21 LSU in Baton Rouge, Louisiana at 6 p.m. ET on ESPN2. The Vols return to Rocky Top on Tuesday, Jan. 11, to host South Carolina at 6:30 p.m. ET.
Tickets are on sale now at AllVols.com.
FULKERSON SETS GAMES PLAYED RECORD: Super senior forward John Fulkerson made his 143rd appearance as a Vol on Wednesday, setting a new program record for career games played.
Fulkerson surpassed Wayne Chism (142 from 2006-10) to stand alone atop Tennessee’s all-time games played list.
VOLS CONTINUING TO CREATE TAKEAWAYS: Tennessee forced 27 Ole Miss turnovers on Wednesday, marking the third game this season in which the Vols forced 25 or more turnovers.