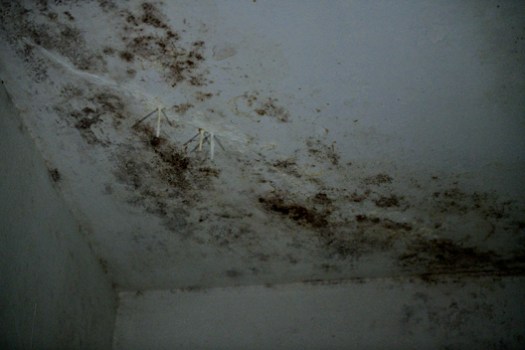 Star Photo/Ivan Sanders Every cell block and jail cell in the Carter County Sheriff's Department old jail side is being inudated with black mold that is quickly spreading along with a pungent odor that makes it hard to stay in the area very long.

Star Photo/Ivan Sanders A crack in the roof of a cell shows black mold finding its way in. 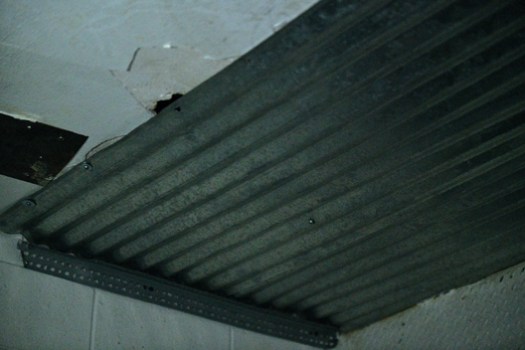 Star Photo/Ivan Sanders A piece of metal roofing covers an opened gap in a cell block of the old jail. 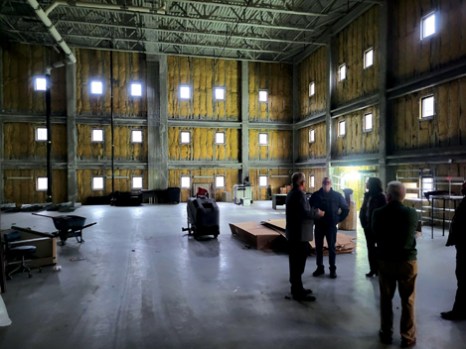 Star Photo/Ivan Sanders Sheriff Dexter Lunceford shows the Carter County Building and Grounds committee the fifth floor of the new jail which from the outside appears to be three floors but is only one which is unusable for jail purposes. 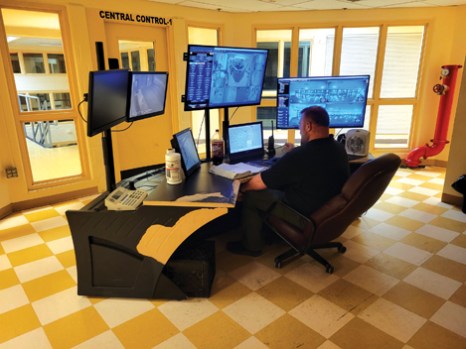 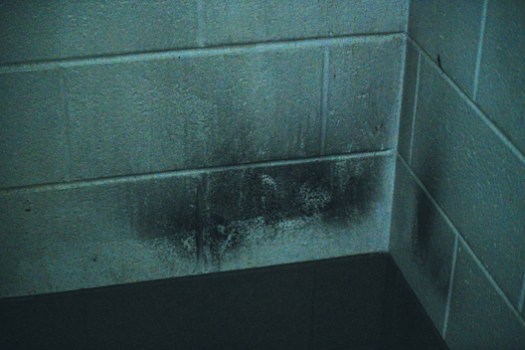 Star Photo/Ivan Sanders Black mold is almost to the floor in this cell. 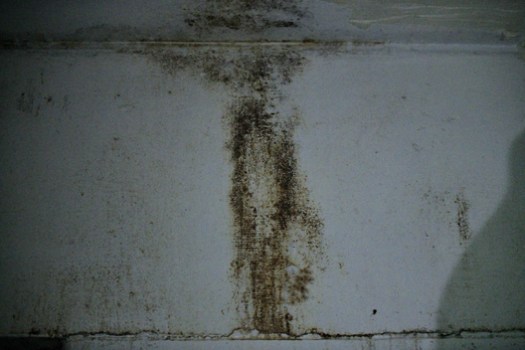 Star Photo/Ivan Sanders Black mold runs down the wall of a cell block.

BY IVAN SANDERS
STAR STAFF
ivan.sanders@elizabethton.com
A tour of the Carter County jail requested by Carter County Building and Grounds Chairman Daniel McInturff provided members of his committee an opportunity to see first-hand the problems with the old and new jail facilities.
McInturff along with County Mayor Patty Woodby and committee members Dr. Robert Acuff and Mike Miller were led throughout the complex on Thursday by Sheriff Dexter Lunceford, who pointed out many issues that he and any further sheriff will be facing in trying to run the jail.
“We have a desperate need here,” said Lunceford. “We can’t build buildings and not maintain them. We can’t halfway build a building because if 10 years down the road you want to finish it, the price will be three times more than taking care of it initially. We need to take care of the buildings with preventative maintenance and proactive maintenance.
“We are not in the business of making money — we provide services. I did not build this jail, but I have to maintain and manage it the best I can.”
The old side of the jail is like “a spook house with a horrible smell” Woodby said as the group looked at black mold engulfing the cell blocks and damaged ceilings.
In the newer section of the facility, which was completed 11 years ago, Lunceford pointed to the use of cheap materials. He also cited poor design decisions, including three-story tall hallways and cell blocks that can be utilized on only one floor.
Lunceford said the oversized central control room requires one jailer to monitor every block without an available bathroom.
“During the jailer’s 12-hour shift, someone would need to provide relief if available or the jailer might even have to use an empty bottle since the department is down 23 jailers as of today,” Lunceford said. “The jailer cannot leave this room because of the safety factor.”
At the end of the tour, Lunceford said that the public was more than welcome to come to the jail for the same tour to see for themselves.
McInturff said the issues with the jail complex are part of a bigger challenge for the county. “Every building was built pretty much at the same time and now every building is requiring work at the same time,” McInturff said. “We have gone so long without touching them and now they are requiring attention. We have a lot coming up even though the agenda has been cleared up, but there are a lot of things to be added.”
Plans are being developed currently to move the sheriff’s office to the top floor of the detention center which will allow for expansion of the current sheriff’s office space for an archives facility.
The projected price tag for the top floor project is estimated to cost $3 million to $4 million. There is funding set aside for archives.