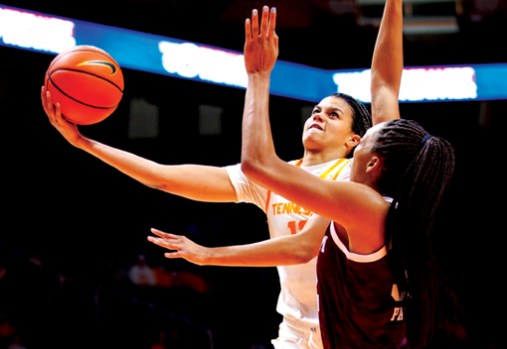 Photo by Emma Corona/Tennessee Athletics Guard/Forward Rae Burrell takes the basketball to the rim for two against Texas A&M. 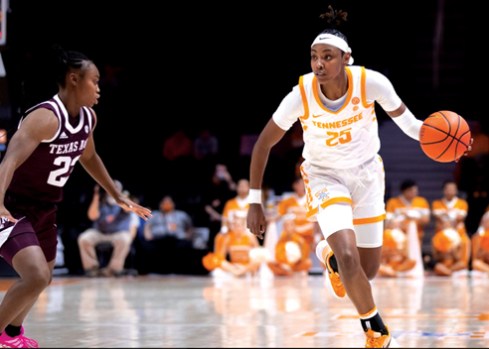 Photo by Emma Corona/Tennessee Athletics Jordan Horston works the basketball up the floor for the Lady Vols.

CONTRIBUTED BY UT ATHLETICS
KNOXVILLE – No. 7 Tennessee rolled to a decisive victory over No. 25/23 Texas A&M on Thursday night, posting a 73-45 win in Thompson-Boling Arena. With three straight SEC wins to open league play, it is UT’s best start in conference action since going 3-0 at the outset of the 2017-18 SEC slate.
The Lady Vols (14-1, 3-0 SEC) were led by junior Jordan Horston, who posted a double-double with 18 points and 13 rebounds. Junior Tamari Key narrowly missed a double-double with nine points and a career-high 11 blocked shots.
Destiny Pitts led the Aggies (10-4, 0-2 SEC) with 12 points and five rebounds. Kayla Wells and Qadashah Hoppie were also in double figures with 11 and 10, respectively.
Texas A&M got on the board first with Pitts knocking down a 3-pointer just over a minute into play. Alexus Dye responded with a layup for UT, but a three on the next possession by Wells gave the Aggies a four-point lead by the 8:17 mark.
TAMU maintained that advantage through the media timeout, stretching it to eight following the timeout before Sara Puckett hit a three, setting off a 7-0 run capped off by a steal and score by Jordan Walker that pulled the Lady Vols within one with 1:46 left in the quarter.
The Aggies rallied back to lead by six 30 seconds later, but senior Rae Burrell scored five straight points, including a three at the buzzer, to put UT within one at 21-20 by the end of the first.
Tamari Key gave Tennessee its first lead of the game just over 30 seconds into the second period, and Dye followed it up with a layup on the next play, fueling a 12-2 run that moved the Lady Vols ahead by nine with 4:57 to go in the half.
Sydnee Roby ended the drought for the Aggies, but Walker and Horston followed it up with three straight buckets to extend the lead into double digits at 39-25 with just over a minute and a half to go.
The Lady Vols led by as many as 16 after a three by Horston, but Sahara Jones scored the last points of the half for TAMU, cutting the halftime score to 42-28.
Texas A&M added four straight points to start the third, but the Lady Vols outscored the Aggies 12-2 over the next three minutes to go up by 20 at the 5:53 mark.
Jada Malone hit a layup for TAMU to cut it to 18, but Puckett and Burrell combined for six points that put UT up 60-36 two and a half minutes later. The Aggies countered with a 6-0 run of their own before a pair of free throws by Walker gave UT a 20-point lead heading into the final stanza.
The Lady Vols kept their foot on the gas in the fourth quarter, limiting the Aggies to three points (fourth-fewest allowed by UT since the quarters format was adopted in 2015-16) while pouring in 11 to expand their lead to 28 points before the buzzer.
Every active Tennessee player saw action in the final period with Burrell adding the last points of the night with a fast-break layup.
UP NEXT:
The Lady Vols will travel to Ole Miss for a 1 p.m. ET/noon CT contest on Sunday that will be broadcast on SEC Network.
JOJO CROSSES 1K:
With 3:42 to go in the second quarter, graduate Jordan Walker scored on a put-back to record her 1,000th career point. Her tally of 1,004 through the Texas A&M game includes 755 in two seasons at Western Michigan and 250 in two years at Tennessee.
BIG GAME HORSTON:
Junior Jordan Horston has excelled in Top-25 match-ups this season, averaging 22.3 ppg. and 12.3 rpg. against ranked opponents in 2021-22.
FROM DOWNTOWWWWN:
Tennessee tied its season-high of seven treys against TAMU. Sophomore Tess Darby led that effort, nailing two on 50 percent shooting from behind the arc.
DOUBLE-DOUBLE TIME:
Jordan Horston recorded her sixth double-double of the season against the Aggies. Tennessee has logged 17 double-doubles on the season and at least one Lady Vol has managed a double-double in 14 of 15 games this season.
SHOT SWATTING:
Junior Tamari Key blocked a career-best 11 shots against TAMU, ranking second all-time in Lady Vol single-game records behind Kelley Cain’s 12 vs. LSU on Feb. 22, 2010.
20+ POINT QUARTERS:
Tennessee tallied 20+ points in each of the first three quarters vs. A&M, giving the Lady Vols 20+ scoring efforts in 15 of their last 20 quarters. UT also has hit 20+ points in five straight contests and in six of the past seven games.