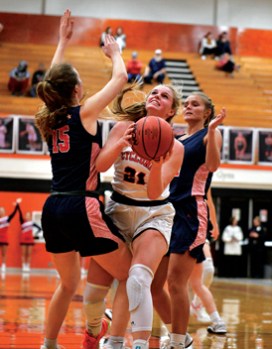 Star Photo/Ivan Sanders Renna Lane splits a double team on her way to the basket. 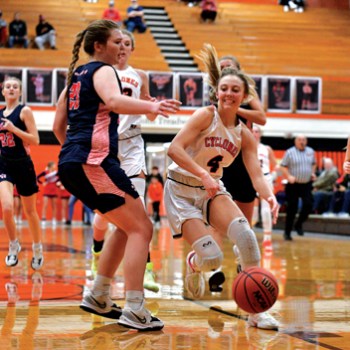 Star Photo/Ivan Sanders Lady Cyclone guard Lina Lyon was having fun against Sullivan East on Friday night as her team picked up a big conference win over their rivals from Bluff City. 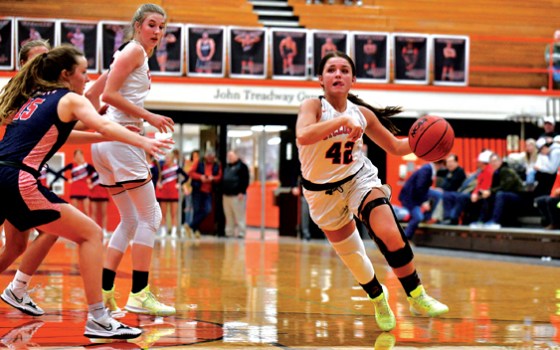 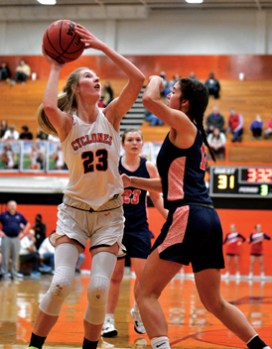 Star Photo/Ivan Sanders Marlee Mathena prepares to go up for a turn around jumper over an East defender. 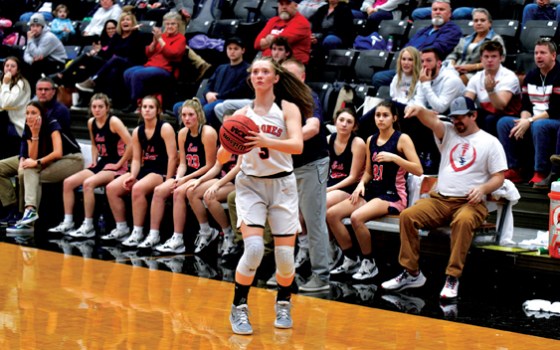 Star Photo/Ivan Sanders Elizabethton's Olivia Holly zeroes in on the basket before unleashing a trey in the first half of play Friday night against Sullivan East. 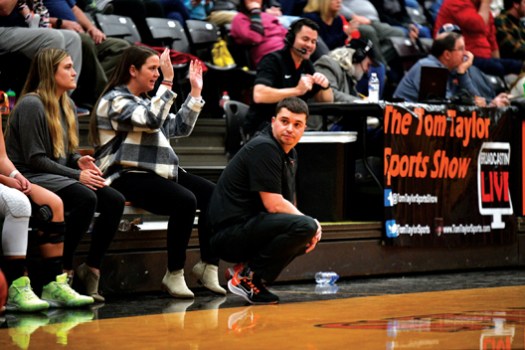 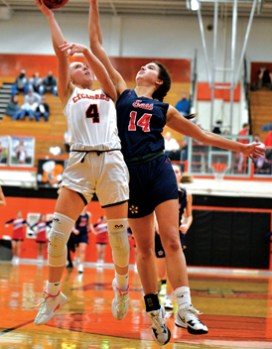 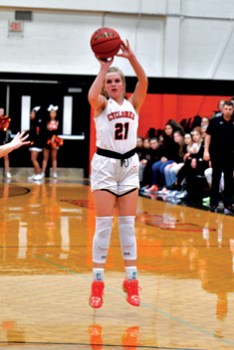 Star Photo/Ivan Sanders Renna Lane pulls up for a trey for Elizabethton. 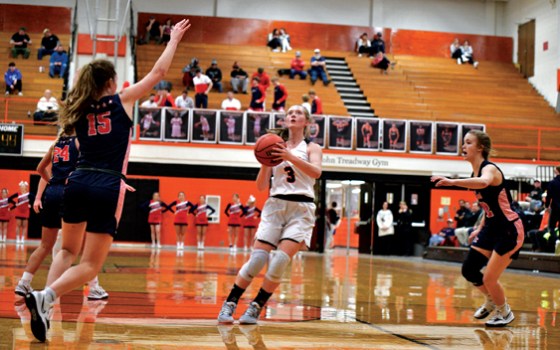 Star Photo/Ivan Sanders Olivia Holly pulls up for a jumper just inside the foul line for the Lady Cyclones.

BY IVAN SANDERS
STAR SPORTS EDITOR
ivan.sanders@elizabethton.com
The Elizabethton Lady Cyclones felt like they had something to prove when the Sullivan East Lady Patriots came calling Friday night at John Treadway Gym and by the time the final horn had sounded the message was sent loud and clear.
In a game that saw four Lady Cyclones reach double digits and everyone that took the floor contributing, Coach Lucas Andrews squad rolled to a 64-49 Upper Lakes Conference win.
Lina Lyon continued a hot streak of scoring as she scored seven in the first quarter to stake the Lady Cyclones to a 20-16 edge after the first period.
Reiley Whitson chipped in with five first-quarter points with Marlee Mathena and Olivia Holly tickling the twine for four points each. A Holly trey in front of the East bench turned the tide for Elizabethton in a tightly played eight minutes.
A 16-9 second period gave the Lady Cyclones a 36-25 lead at intermission. Elizabethton hit four treys in the period as Renna Lane dropped in five in the quarter to lead ‘Betsy.
Jenna Hare scored 12 in the first half to keep her Lady Patriot team from being in a bigger deficit. Hayley Grubb totaled nine points in a contributing role for the Lady Patriots.
The offensive output coming out of the locker room was a little different from the first half as the Lady Cyclones did manage to add four more points to their lead by outscoring their visitors from Bluff City 14-10 to extend the lead to a 50-35 edge heading into the final eight minutes of action.
The two teams matched each other point for point in the fourth quarter as both teams scored 14 points each.
Lyon led the Lady Cyclones in scoring with 20 points in the game with Whitson having a solid game with 12 points. Lane and Marlee Mathena scored 10 points apiece while Holly finished with seven points in the game.
Hare scored a game-high 21 points to lead the Lady Patriots. Grubb finished with 10 points.
“Everybody went into the game scored – just a total team effort,” said Andrews after the game. “Defensively, they have three of the best players in the league and I thought we did a great job of doing what we were supposed to do. I am extremely proud.”
—
Elizabethton, 64-49
Sullivan East (49)
Abby McCarter 2, Riley Nelson 6, Hanna Hodge 6, Kara Hicks 4, Jenna Hare 21, Hayley Grubb 10.
Elizabethton (64)
Olivia Holly 7, Lina Lyon 20, Renna Lane 10, Marlee Mathena 10, Maddie Fowler 3, Reiley Whitson 12, Katie Lee 2.
Sullivan East … 16 9 10 14 – 49
Elizabethton … 20 16 14 14 – 64