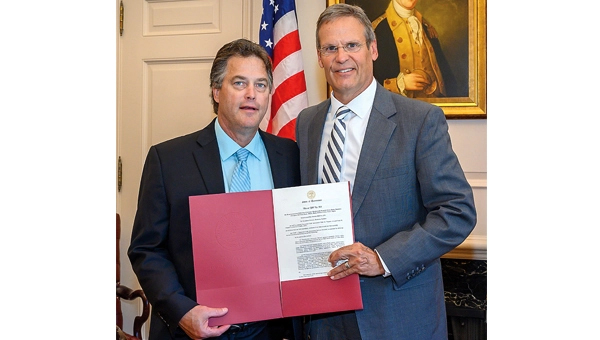 Redistricting is going to be a critical issue in the upcoming legislative session, and state Rep. John Holsclaw, R-Dist. 4, is ready for the debate.

“There are some unhappy people, some so-so people, and some happy people,” said Holsclaw, who is a member of the House Redistricting committee.

“As far as East Tennessee, we lost a little bit of our population but the state grew … in the region, meaning we did not lose any positions up here,” he said. Holsclaw’s new district includes Roan Mountain “where I picked up 7,000 people, and I now represent the state park area.”

Representing that state park area will prove pivotal, as the future of the state park pool is a critical issue to his constituents.

“We have been pressing that issue very hard, because we do not want that pool to close,” said Holsclaw. “The state parks are closing several pools in the area, so in the worst case we are hoping for another venue such as a waterpark of some sort.

“We are pushing very hard to keep the pool open, and I have not heard the final plan, but it is something we are working hard on. Roan Mountain is one of the top parks in Tennessee, and the pool is a highly used and valued part of the park.”

One other pressing issue in Carter County is the Workforce Development Complex, which the county hopes to transform into a centralized career technical education center for all four of the county’s high schools, and a dual enrollment partnership between the high schools and Northeast State and TCAT of Elizabethton. Local officials have asked the governor to allocate $20 million in the upcoming budget towards the project. The Legislature will have to approve these funds.

Additionally, the WDC could help train residents at a proposed drug rehabilitation program being developed at the Northeast Correctional Complex.

“Sen. Rusty Crowe and I have been pushing that issue heavily,” Holsclaw said. “We have had Gov. Bill Lee up there to tour the facility as well as people from the Department of Corrections to see what it is going to take to transition that area into a rehab center as well as migration program back into the public.

“We are trying to work on that issue so we do not lose that facility and it can be used as something beneficial for East Tennessee,” he said.

In all, Holsclaw said he expects a non-controversial session. “It is an election year, and people tend to stay away from those during this time. There will be some standard items however, such as COVID issues and mental health,” he said. “However, you really do not know a lot of what you are going to be dealing with until the bills are out on the floor.”