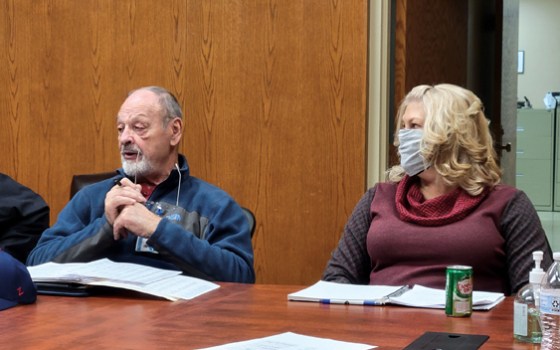 Star Photo/Ivan Sanders Carter County Financial Management Committee Chairman Brad Johnson and committee member Ginger Holdren discuss steps to get a final answer in regard to whether Sheriff Dexter Lunceford has to present documentation of his department's staff and pay to be in compliance with state audits. 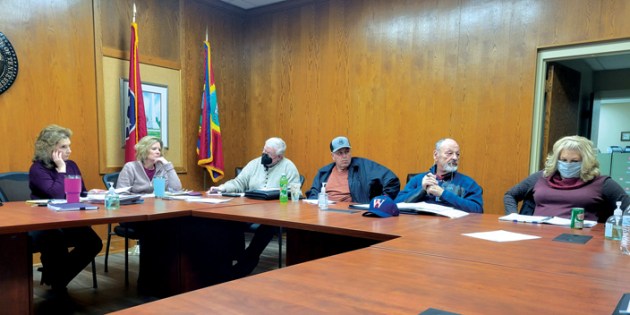 BY IVAN SANDERS
STAR STAFF
ivan.sanders@elizabethton.com
The Attorney General is being asked to help resolve an ongoing dispute between the Carter County Financial Management Committee and the sheriff over documentation relating to employee pay.
The committee had asked Sheriff Dexter Lunceford to attend the group’s Monday morning meeting and provide answers to questions they had in regard to documents required for the state audit to be in compliance with the 81 Act.
Lunceford did not attend that meeting but did appear at the budget committee meeting at 6 p.m. Monday, delivering a box of materials during the public comment session. “So everybody can see this, this is the actual agreement that doesn’t list the official salaries and a letter stating that I don’t have to do a letter of agreement with the mayor,” Lunceford said at the time. “This is payroll that the payroll department gets every year signed by me and in here you will find every payroll back to 2016 signed by me, so hopefully that will suffice.”
At issue are questions regarding the payroll in the sheriff’s department that were first raised during a November financial committee meeting, when a part-time bailiff told the committee raises were not given to all employees.
“Between the November and December meeting, the Finance Department started researching documents through the payroll technician and through the director, and we found that the complaint by the employee was 100% right,” said committee chairman Brad Johnson. “Part-time officers were not given their 4% raise as directed by the county commission. As of today, the bonuses have been issued and that problem is resolved.
“During the research that was done, we ran into other items that were still questionable as to compliance with the 81 Act and the policy and procedures for the financial management of this county.”
That is one of several reasons why the committee had asked Lunceford to attend the meeting, Johnson said. He said the last two financial audits of the county cited non-compliance regarding a state statute requiring documentation of sheriff’s department employees and their salaries.
However, in a letter presented to the Star on Feb. 4, 2021, by Lunceford from Carter County Attorney Josh Hardin, the attorney wrote, “…if there is a finding for your office solely for not filing a letter of agreement between you and the County Mayor regarding the number of deputies or the amount of compensation budgeted for your office, that appears to be just plain wrong.
“A reading of the plain language of the statute indicates there is no requirement for the sheriff or other officials to file anything if he or she agrees with the number of deputies/assistants and associated salaries/expenses as budgeted by the county.”
Johnson acknowledged receiving a copy of the letter from Hardin that supported the sheriff’s claim that it was his option if he did submit or did not submit the information.
However, Carter County Finance Director Carolyn Watson told the committee that the state is currently on site doing their audit and that she has been told that this will be written up again and more stringently because it has been a multi-year issue and will be again if not resolved.
“It was in the state statute and at the end of it the very last line says that if you don’t conform, you have committed a misdemeanor in the state of Tennessee,” Johnson said. “We keep getting hit for a deficiency in our audit and we are responsible for it. One thing that we do as a Chairman is to eliminate any deficiencies that we have and our accountability is as perfect as it can get.”
On Monday the committee asked Hardin to draft a letter to the state treasury department as well as the state attorney general and request their opinion as to whether Lunceford should be required to submit a letter of agreement documentation of a list of his employees along with their salaries.
Committee member Ginger Holdren made the motion to have Hardin draft and send a letter to the state treasury department and the state Attorney General and was seconded by Mark Tester. The committee voted unanimously for the letter.
Johnson added that if the opinion of the state treasury and state attorney general are in agreement, then the argument will be between the state legislature where the statute originated and the office holder and not the Financial Committee.