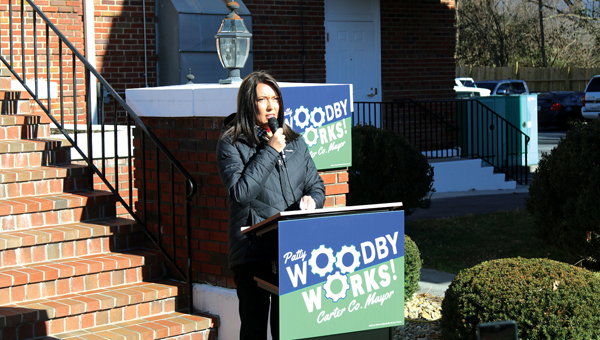 On a chilly Tuesday morning on the steps of the Carter County Courthouse, current Carter County Mayor Patty Woodby announced to the public that she will be running for re-election during the upcoming year, running on the slogan “Woodby Works.”

Woodby is the first female mayor in Carter County history and was elected as mayor by the Carter County Commission after Mayor Rusty Barnett unexpectedly passed away in August of 2020.

Woodby began her speech to the crowd of around 30 people by talking about the history of the county and the “Pioneer Spirit” which fueled the Overmountain Men in their march to Kings Mountain during the Revolutionary War and the beginning of the State of Franklin as a result of North Carolina’s tax laws.

“I surely must have had that same pioneer spirit, because I grew up with seemingly insurmountable obstacles,” Woodby said. “It is about the power of faith and hard work. We are over-comers.”

Woodby talked about the many obstacles she faced in her life, eventually graduating from ETSU and working her way from an administrative assistant in the County Court Clerk’s office to “knocking on hundreds of doors in her campaign to become a county commissioner and vice-chair of the County Commission.

“When the chairman stepped down, that made me interim chair, and when the County Mayor unexpectedly died in office, I was elected chairman and thus became mayor. Was I ready for it? Apparently God and the County Commission thought so,” Woodby said.

“I had never even thought about running for mayor, but I had already been learning everything I possibly could to help make things better for everybody in our county,” Woodby continued.

Woodby then went on by discussing the initiatives that she is taking to help the county, such as the implementation of a workforce development complex and a rehabilitation center to combat the opioid crisis in the area.

“Carter County is leading a regional effort to establish a residential addiction recovery center at the Roan Mountain correctional work camp. This is well on its way to happening, and we are actively discussing next steps with local nonprofits and the State of Tennessee. Christian counseling, hard work, and job training will provide a pathway to being drug free, productive citizens for many who would otherwise flounder for years in and out of jail,” Woodby said.

“Secondly, I am working with local legislators and Gov. Bill Lee to secure $18 million to transform our Workforce Development Complex into a regional center for Vocational Education. We’re working with Carter County schools, Northeast State, and the Tennessee College of Applied Technology to offer career and technical classes at one central location for our high school students as well as adults seeking a fresh start,” Woodby said.

The mayor rounded out her speech discussing other initiatives that are very important to her in terms of advancing the county. “We’re bringing working water systems to areas like Dry Creek that have never had reliable clean drinking water before. We are investing over $10 million to bring high speed broadband, expanding the Tweetsie Trail, and improving EMS communications.

“I believe we are standing on the threshold of so many opportunities. We have a generation standing at the crossroads. Honor me with four more years as your mayor, and watch what faith and hard work can do,” Woodby said.