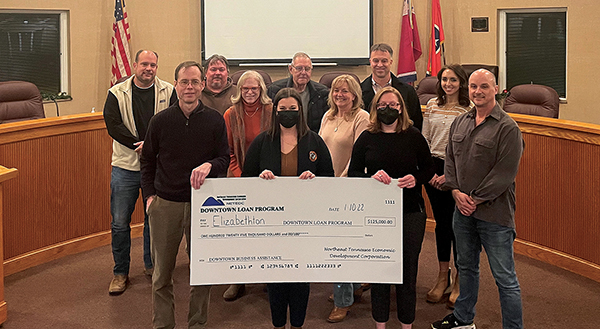 Nearly 20 business owners were on hand Monday to learn about $150,000 in grant funds available for downtown improvements and a new loan program aimed at supporting downtown businesses.

The City of Elizabethton held the public interest meeting in regard to the Downtown Improvement Grant awarded by the state’s Department of Economic and Community Development late last year.

“Unlike the local facade grant, we have a larger pot of money to pull from since this money is coming from the state,” said Logan Engle, the city’s Director of Planning and Economic Development. “This means that we can award grants that are larger than $2,000.”

The city has capped the maximum for grants at $40,000 for an individual project.

“This is a reimbursable grant program, which means that you have to front all of the money in the beginning stages. However, you are eligible for reimbursement up to 75 percent which is capped at $40,000,” said Engle.

This grant also can be used for signage, which was not allowed in the previous grant.

Applications for the Downtown Improvement Grant can be received in the Elizabethton City Hall or by email by contacting Engle at lengle@cityofelizabethton.org. Applications are due Jan. 31 and grants are expected to be awarded on or before Feb. 14.

During the Monday meeting, the city also introduced a new initiative that goes hand in hand with the Downtown Improvement Grant known as the Downtown Elizabethton Loan Program.

“This loan program is for businesses in the Main Street District,” said Ken Rae with First Tennessee Development District. “This allows you to borrow up to $25,000 with a fixed interest rate of 3 percent. This loan can be used for renovations to a downtown property or to purchase fixed equipment to create, expand, or renovate a downtown property.”