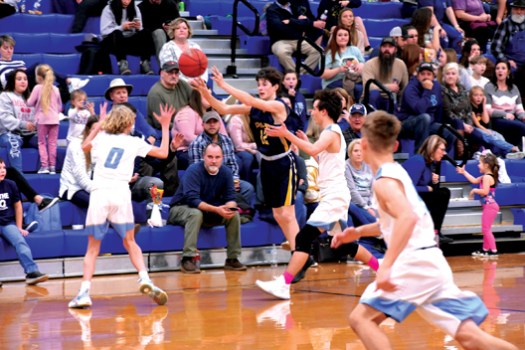 Star Photo/Carter Nagy A Cloudland player passes over the top of the Hampton Middle defense. 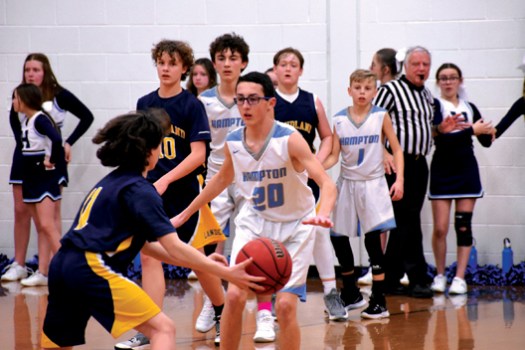 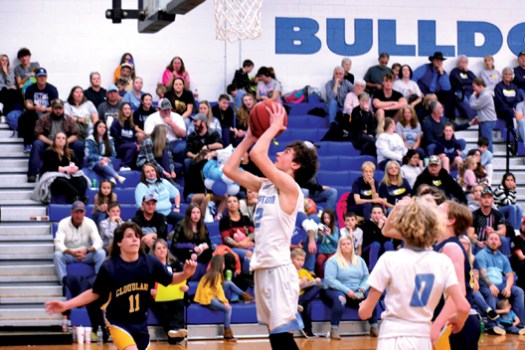 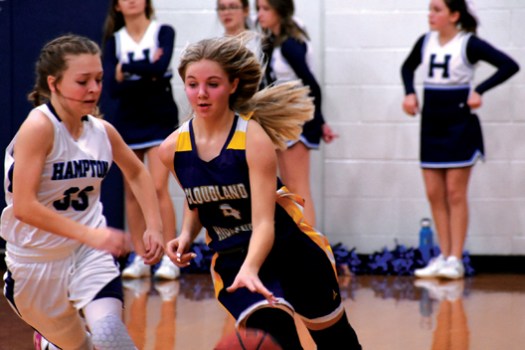 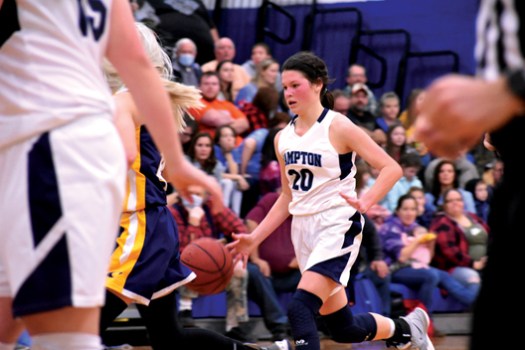 Star Photo/Carter Nagy A Jr. Lady Bulldog works the basketball up the floor.

BY CARTER NAGY
STAR CORRESPONDENT
The Hampton Middle Jr. Bulldogs took on the Cloudland Jr. Highlanders Monday evening for Hampton’s 8th grade night.
Girls Varsity
Cloudland…..43
Hampton…….27
The Jr. Lady Highlanders had a good start to their game, scoring 12 points off a series of layups. The Lady Bulldogs clinched on though, putting up five points in this quarter, keeping them in the ball game.
In the second the Lady Bulldogs had a slow quarter, only scoring eight more while the Lady Highlanders scored 14. The score at the half was 26-13 Cloudland.
The Lady Bulldogs responded in the third, scoring eight while keeping the Lady Highlanders to only six. The score was 32-21 Lady Highlanders by the end of the third.
In the fourth, the Lady Highlanders didn’t let up as they scored 11 points while keeping the Lady Bulldogs to six points. The Lady Highlander’s defense helped them clinch the win in this game.
Boys Varsity
Hampton……44
Cloudland….18
The Jr Bulldogs took a solid 10-4 lead in the first, giving them great leverage right off the bat.
The second quarter was yet again another fast-paced battle, both teams were getting steal after steal. The Bulldogs were quickly put in the bonus in the second as fouling seemed to be a problem for the Jr. Highlanders in the half.
The Bulldogs went into the intermission with a 23-10 lead.
In the third quarter the Bulldogs didn’t let up as they scored 10 while keeping the Highlanders to six points. The Bulldogs would go into the fourth period with a 33-16 lead.
The fourth was the nail in the coffin for this game as the Bulldog’s defense once again held the Highlanders back.
—
Boys
Hampton, 44-18
Cloudland (18)
Devin B. 6, Cass T. 7, Tristan L. 3, Bryce B. 2.
Hampton (44)
Caden Davis 15, Connor McKinney 21, Logan Lunsford 2, Jamie Turbyfill 2, Dylan Campbell 2, Cameron Nave 2.
Cloudland….. 4 6 6 2 – 18
Hampton …… 10 13 10 11 – 44