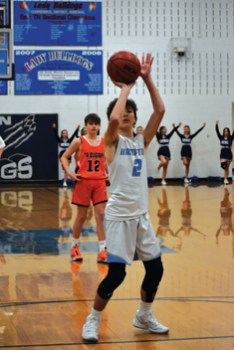 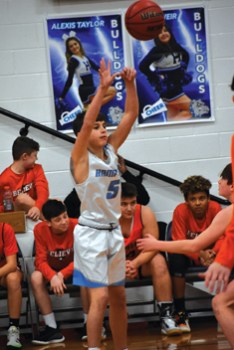 Star Photo/Gracie Fields Ezra Tolley puts up a shot from the corner for Hampton Middle against TAD. 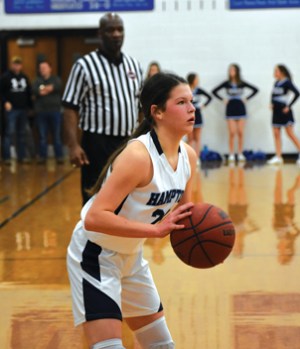 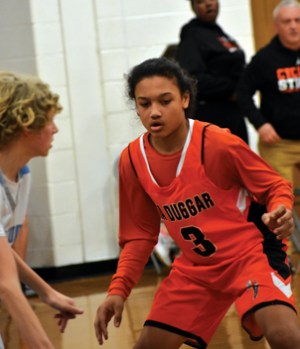 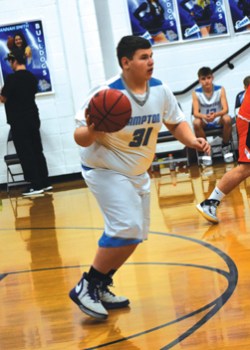 Star Photo/Gracie Fields Jamie Turbyfill takes the ball toward the Hampton side of the court in Tuesday's action. 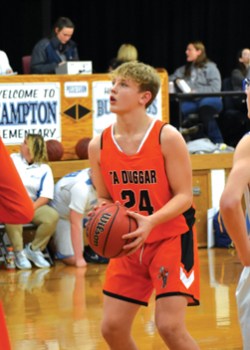 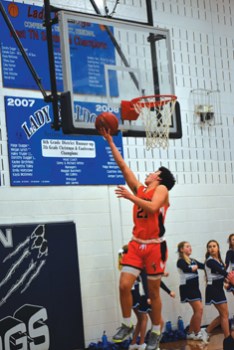 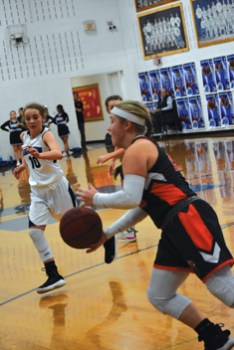 BY  GRACIE FIELDS
STAR CORRESPONDENT
HAMPTON – It was a busy night at Hampton Elementary as both T.A.Dugger and Hampton Middle School basketball teams played.
First up were the varsity girls teams as the Jr. Lady Cyclones started and finished strong to take a 43-15 win.
T.A.Dugger girls started strong by scoring seven points in the first quarter as Michelle Sheilds scored four of those total points.
T.A.Dugger’s offense was strong and showed great determination. Hampton, however, made aggressive plays that eventually helped their defense.
Hannah Smith scored a total of eight points in the first half. Both teams stayed strong throughout the entire game as T.A.Dugger finished on top.
The team was quick to celebrate and show good sportsmanship to their opponents.
Next up was the boy’s varsity.
T.A.Dugger’s defense played with stinginess against Hampton resulting in a number of blocked shots and rebounds. Within the first half, T.A.Dugger had recorded 24 points with six of those coming from Rhett Slagle.
Hampton fought just as hard to get back into the contest. Connor McKinney made a key layup that added two more points to the Hampton total.
In the end, T.A.Dugger came out on top with a win by the identical score of the girl’s contest, 43-15.
Girls
Varsity – TAD 43-15
TAD (43)
Adrian Heading 8, Michelle Shields 12, Kalli Shepard 4, Rylee May 9, Molly Wallin 2, Reagan May 2, Sadie Williams 2, Jamira Smalls 4.
Hampton (15)
Smith 12, Hodge 2, McClain 1.