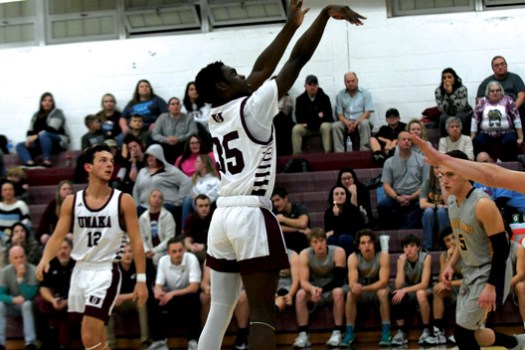 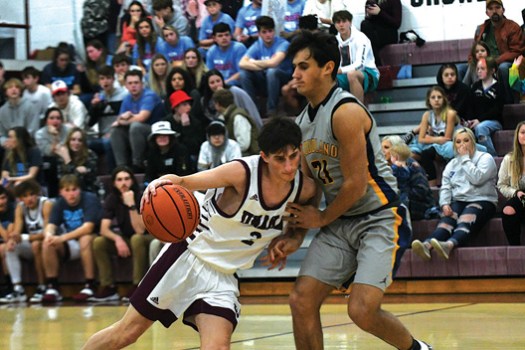 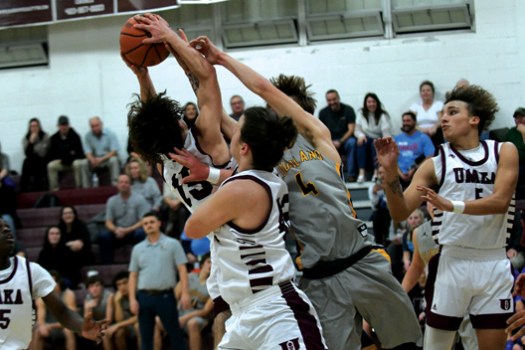 Star Photo / Brandon Hyde It was a tight matchup early on as Cloudland and Unaka fought hard Tuesday night. 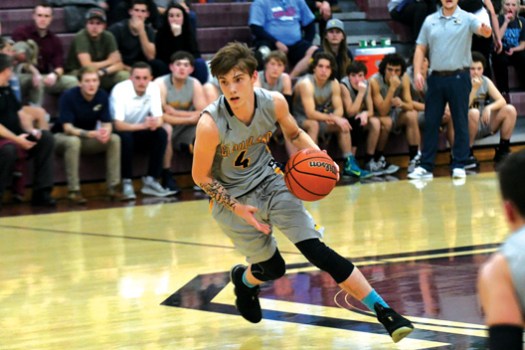 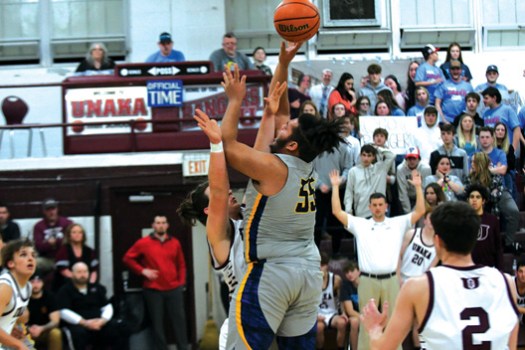 Star Photo / Brandon Hyde Dylan McClellan puts the "high" in Highlander as he towers over a Unaka defender for a shot. 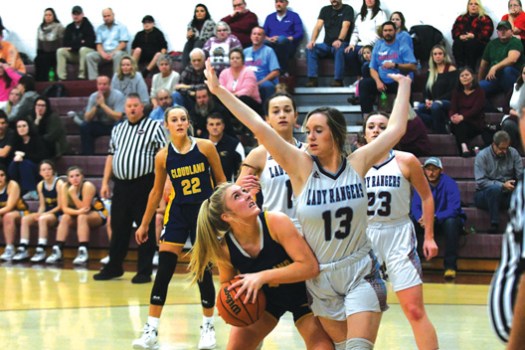 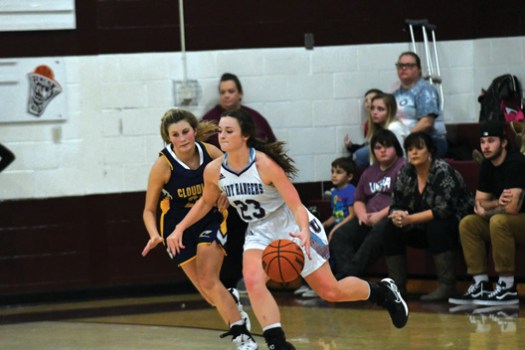 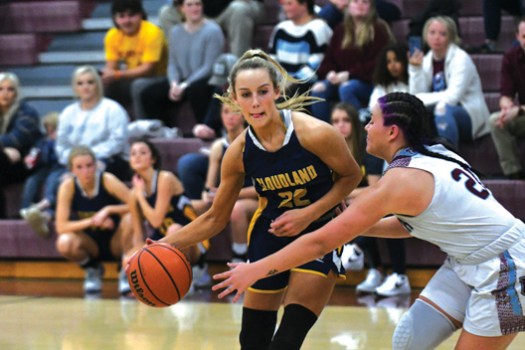 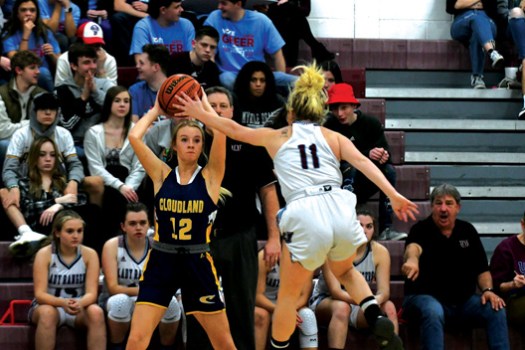 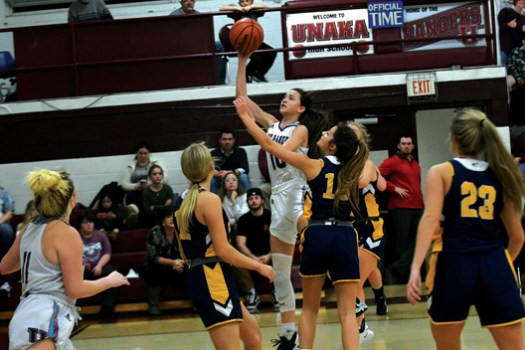 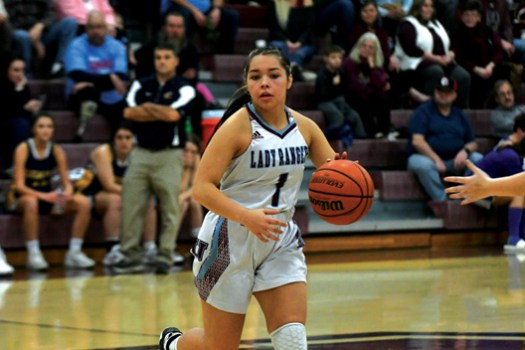 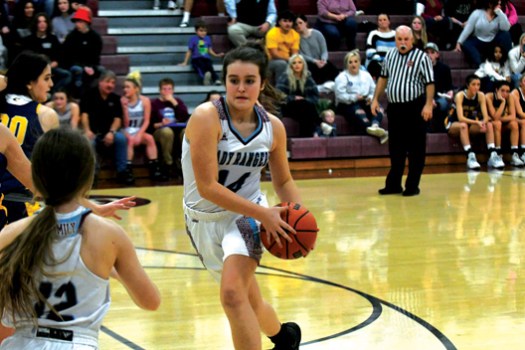 BY ALLEN LAMOUNTAIN
STAR CORRESPONDENT
Senior guard Dylan Shell connected on a trey at the buzzer for Cloudland to force overtime, but in the extra session senior Devin Ramsey and Joe-Z Blamo stepped up and led Unaka to a 64-55 Watauga Valley Conference win.
“Devin makes us go,” Rangers head coach Aaron Dugger said. “He doesn’t get talked about or get the respect he gets on the football field, but he does a lot for us. He plays all emotion and we just let him go.
“This whole game was important because Cloudland wanted to get Spencer (Nave) a win here and that was important to them. It certainly added to it because he is trying to put his stamp on their program and Cloudland’s kids have bought into it. Cloudland is tough anyway but that made it even more so.”
Senior guard Joe-Z Blamo scored a game-high 36 points on a variety of shots – mostly in the paint – and he shot 8-for-15 from the free throw line. The Rangers (8-10, 1-2 WVC) led 15-13 after one period and took a slender 30-29 halftime advantage.
“The thing with Joe-Z is that he can’t score from 15 feet,” Dugger said. “Cloudland was clearly giving him the jump shot and he made a few early because he has been working on his game. He’s a player and that’s all I can say. He makes us look good on the sideline.”
The two teams battled through the second half with neither getting more than a four-point lead. The Rangers took a 42-38 lead into the fourth quarter and the ‘Landers took a 45-44 lead with 4:35 left in regulation but the Rangers ripped off a four-point run led by Blamo. Shell hit from the top of the arc as the buzzer sounded to tie the game at 48-48.
Ramsey then opened the overtime period with a pair of deuce buckets as did Blamo as Unaka ran off the first nine points of the stanza. The ‘Landers didn’t roll over though with Caden Clarke converting a pair of buckets and Caleb Sluder hit one as well.
Sluder finished with a team-high 28 points with nine rebounds with Clarke and sophomore post Dylan McClellan each totaling nine points for Cloudland. Ramsey finished with 13 points.
GIRLS
Unaka 51
Cloudland 34
Lyndie Ramsey was unstoppable, scoring 29 points and taking down eight boards with five steals as the Lady Rangers took advantage of a poor shooting night for Cloudland. Senior Macy Ensor scored 16 points to back Ramsey’s effort.
Ensor hit four trey’s in the contest. The Rangers (16-4, 2-0 WVC) took a 25-11 lead into the halftime break and had a 36-23 advantage going into the fourth quarter.
“Cloudland is always tough and physical,” Lady Rangers head coach Kenneth Chambers said. “I think we matched them in what they did from that standpoint. It was a total team effort with some girls stepping up.
“Mailey Guy usually starts but she has been down with COVID and wasn’t feeling well tonight in her first game back. Tara Whitehead and Abby Slemp did an excellent job. Kiki Forney does a lot for us defensively and running the floor. Lyndie is just a great player who can do it all, scoring, rebounding and playing good defense.”
Ella Benfield led the Lady ‘Landers with nine points with Saharra McKinney and Ryan Turbyfill each contributing seven points.
—
GIRLS
Unaka 51-34
Cloudland (34)
Birchfield 3, Benfield 9, McKinney 7, Turbyfill 7, Christman 3, Fields 5.
Unaka (51)
Simerly 2, Ramsey 29, Whitehead 2, Forney 2, Ensor 16.
Cloudland.. 6 5 12 11 – 34
Unaka…….. 15 10 11 15 – 51
3-point goals: C 3 (Birchfield, Fields, McKinney), U 5 (Ensor 4, Ramsey).
BOYS
Unaka 64-55 (OT)
Cloudland (55)
Sluder 28, Shell 7, Clarke 9, McKinney 2, McClellan 9.
Unaka (64)
Slagle 5, Seigfried 3, D. Ramsey 13, Lydick 2, Blamo 36, L. Ramsey 4, Shomaker 1
Cloudland.. 13 16 9 10 7 – 55
Unaka…….. 15 15 12 6 16 – 64
3-point goals: C 3 (Sluder 2, Shell), U 2 (Blamo 2).