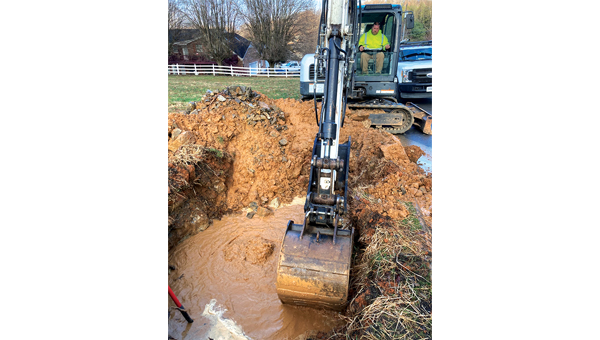 Photo Contributed The Elizabethton Water Department repaired a leak late last month on Westwood Drive that was producing 100 gallons of water per minute.

During the Elizabethton City Council’s first meeting of 2022, the council heard a success story from the city’s water department and were informed of a potential upgrade to Elizabethton’s water infrastructure.

Jonathan Pleasant, the city’s Water Resources General Manager, informed the council of a new piece of equipment that was used to find a leak in the city’s water system that could have cost the government a large sum of money.

“The leak in the water system had been ongoing for the past couple of months, but it is hard to pinpoint when it first occurred because there were never any wet spots or signs of a leak,” Pleasant said. “We started having trouble with the pumps running all the time, and that is when we knew that something was going on.”

The leak, which was located on Westwood Drive in Golf Course Acres, was dispersing water at around 100 gallons per minute.

Pleasant said that instead of coming up out of the ground, the water was being dispersed into an underground cavern system, making things much harder for the department.

“We started looking into a correlator leak detection device and actually did a demo with one to help us find where the leak was. And with that piece of equipment, we were able to find the source of the leak in a matter of a few minutes,” said Pleasant.

Pleasant said that the leak in the water system was found and repaired around two weeks ago.

The leak further explains how old the City of Elizabethton’s water infrastructure is, which brought up a point from City Manager Daniel Estes about money that the state of Tennessee will provide to communities in order to develop water systems.

“The state allocated money to the Tennessee Department of Environment and Conservation for water infrastructure projects. They allocated a billion dollars across the state for these projects, and yes that is billion with a B,” said Estes.

The City of Elizabethton is expected to receive millions of dollars worth of funds, something the city hopes to use to improve their water meter systems using Advanced Metering Infrastructure, or AMI.

“Right now, we have meter readers go out and read water meters once a month, and it is a process that takes up the entire month,” Pleasant said. “With AMI, we would put an automated meter into not only our customer meters, but our meters at the water tanks and pump stations.

“This would allow us to read every meter in the system in about a 15 minute span. They work like cell phone towers where they communicate to repeaters, allowing all 12,500 meters in the system to be read much more quickly.”

Pleasant also said an AMI system would be much more beneficial for customers, saying, “Right now if there is a leak on the customer’s line, we are not able to know when the leak starts because we only read meters once a month, which causes a customer’s water bill to spike.

“With AMI, if there is a leak on the customer’s side, they can know within a span of hours. In fact, most of the companies we are looking into have an app that customers can log into where they can check how much water is being used and will even notify them if there is a leak,” Pleasant said.