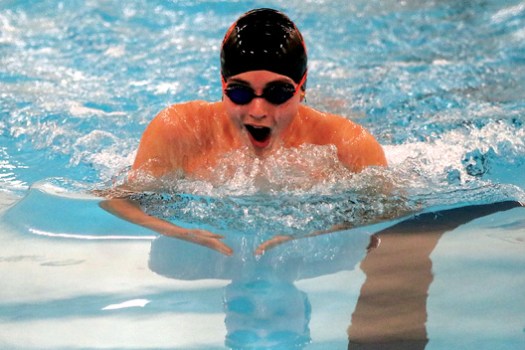 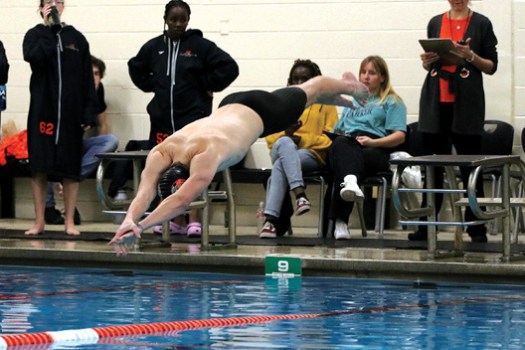 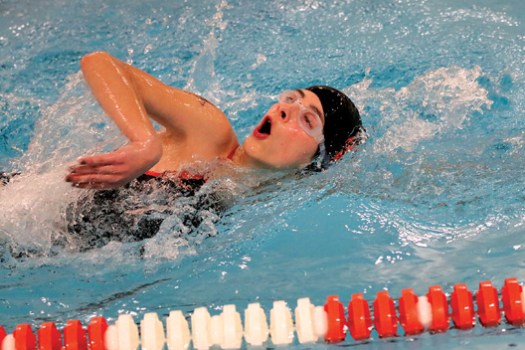 Star Photo/Randall Bennett Sophomore Eva El Helou takes in a deep breath during her heat on Thursday in the Elizabethton High School pool. 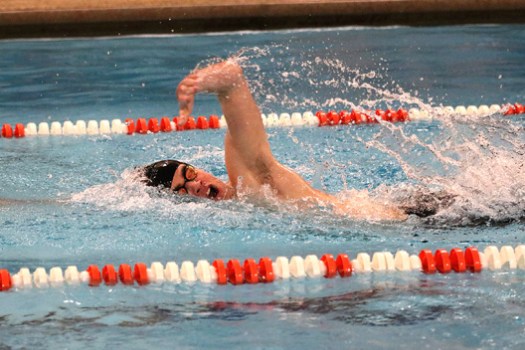 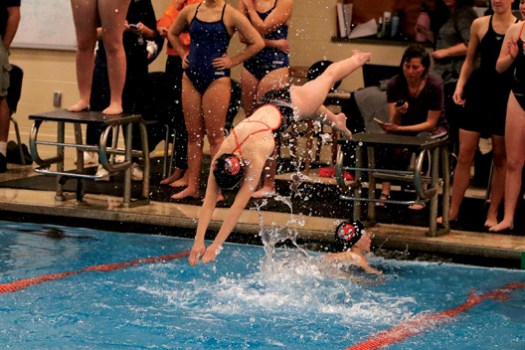 Star Photo/Randall Bennett Sophomore Sophia James enters the water for her portion of a relay race on Thursday. 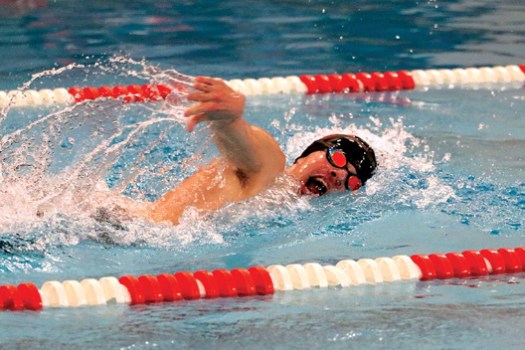 Star Photo/Randall Bennett Sophomore Morgan Roszel takes a breath as he swims in the Freestyle. 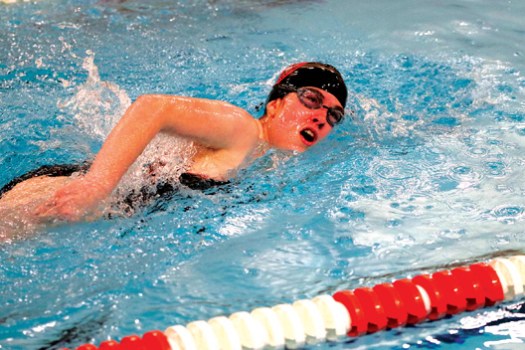 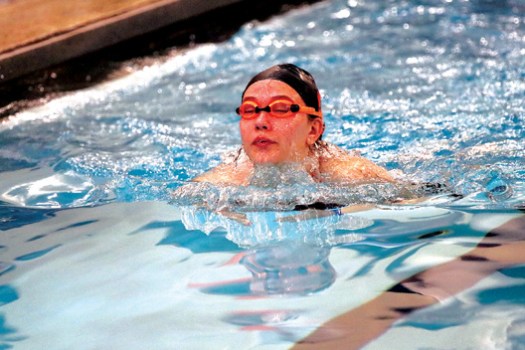 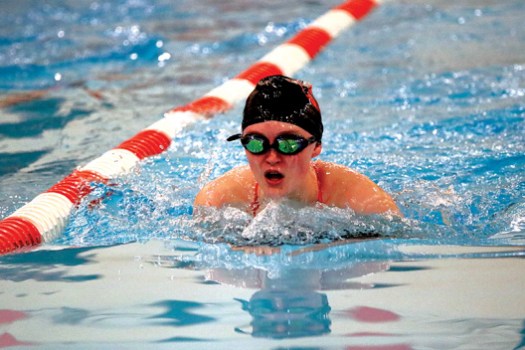 CONTRIBUTED BY KELLI BROUSSARD
The Elizabethton Cyclone swimmers had their most successful night in more than a decade on Thursday night against Volunteer and Cherokee High Schools.
The 12-member team not only won the meet but also qualified two additional swimmers for the State Championship meet and broke records in the men’s 200 Individual Medley and women’s 50 Freestyle.
Cadie Digby and Elijah Smith will join Morgan Roszel and Kody Broussard in Nashville on Feb. 11 and 12 where they will compete in Vanderbilt University’s home pool.
Sophomore Roszel was the first record-breaker of the night by improving on his own state qualifying time in the 200 Individual Medley with a time of 2:12.00, breaking the school record by an impressive 2.77 seconds.
Not to be outdone, another sophomore, Digby, followed suit when she swam the 50 Freestyle in a record-breaking time of 26.56.
Senior Elijah Smith and Digby each broke the one-minute barrier in their next events when Smith swam a personal best and State qualifying time of 59.69 in the 100 Butterfly and Digby turned in a personal best State qualifying time of 59.31 in the 100 Freestyle.
The energy in the pool area was palpable by the time Kody Broussard swam his State qualifying 5:25.37 500 Freestyle.
“At this point in the season, when our most rigorous training period has just finished, bodies are broken down, and muscles are sore, to have this kind of success bodes well for next week’s Regional Championship meet in Kingsport. We haven’t even begun our taper yet, so we’re very excited to watch the kids perform next week,” stated Coach Kelli Broussard.
“It wasn’t just our state qualifiers and record breakers that swam well tonight.  The entire team cut huge time and made the night super exciting,” said Broussard.  “Events that were raced just five days ago in best times, were cut even more tonight.”
On the women’s side, Freshmen Grace Artz cut over three seconds in her 200 Freestyle and Tabitha Tshuma dropped over a second in the 50 and over two seconds in the 100 Freestyles.
Sophomore Layla El Helou improved by almost three seconds in her 100 Freestyle while her twin sister, Eva El Helou, slashed an astounding 14 seconds in her 500 Free.
On the men’s side, in the 100 Freestyle, sophomore RJ Brewer dropped over three-tenths of a second while Roszel cut more than two seconds. The 200 Freestyle saw freshman Liam Cannon drop four-tenths of a second.
Notable races were also swum by sophomore Sophia James who swam the 200 Individual Medley for the women in a time of 3:03.69, cutting more than sixteen seconds in the event, and Artz who, swimming next to teammate Eva El Helou, bravely swam the 500 Freestyle for the first time ever in 7:31.85.
Of the 22 events swum on the night, Cyclones swimmers won 12.
Combined, the team outscored Volunteer High School 120-103 and Cherokee High School 141-48.  They travel to Kingsport next Saturday to swim in the Regional Championship meet at the Kingsport Aquatic Center.
Preliminaries begin at 9:15 a.m. with the top 16 in each event competing in finals beginning at 5:30 p.m.