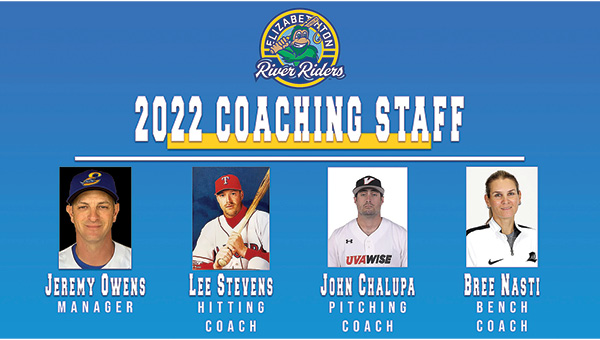 Stevens professional resume begins back in 1986 when he was the first-round pick for the California Angels. He continued to play 17 years in professional baseball, 10 being in the Major Leagues with the Angels, Rangers, Expos, Indians, and two years in Japan. From 2013-2019 Stevens held the hitting coach role with the Colorado Rockies Rookie League, A+, and AA levels.

“I look forward to working with these young men and help them become better players and good role models in this great game of baseball,” Stevens stated.

Chalupa is currently the pitching coach for the UVA Wise Cavaliers with a background in collegiate baseball. While pitching at Odessa College, Chalupa finished an associate’s degree in Sports Medicine. After transferring to Fairleigh Dickinson University, he graduated with a bachelor’s in science and biology while he continued his baseball career for the Knights. After schooling, his college coaching career started at Lake Erie College under Ray Skjold and Gary Vaught.

As Chalupa enters this season with the River Riders he explained, “[I’m] very excited and eager to work alongside and learn from Jeremy Owens and Lee Stevens. With their experience and passion for the game, I believe we will help these young men within this game while also getting some “W’s” along the way!”

For the first time in Elizabethton River Riders history a female coach will be joining the staff. Bench Coach Bree Nasti has a record-breaking background. Graduating from the University of Buffalo, she was a four-year letter-winner, a three-time All-Region honoree and three-time All-Mid-American Conference selection. Nasti left Buffalo as the all-time leader in batting average (.387), home runs (27), RBI (113), hits (197), doubles (46), triples (7), runs (93) and walks (66). In 2002, she set the SUNY Buffalo and MAC single-season record with a .451 batting average. The Baldwin, NY native was the head coach of softball at Adelphi University for six years before moving to Providence College in 2018 as the assistant coach. In 2021 she was promoted to Associate Head Coach.

“I want to thank Casey Fahy for this incredible opportunity. It is an exciting time for women in baseball and I am thrilled to join an incredible staff and organization. I look forward to helping develop players while also developing myself professionally. I can’t wait to work with and for Jeremy Owens and his staff. I believe the River Riders are a great organization whose philosophies, values, and styles align with my own. The sense of inclusiveness I have felt from the start makes me excited for the culture and environment I believe I will experience in Elizabethton.”

Manager Jeremy Owens commented on his coaching staff saying, “I’m so excited for our team this year, having Lee Stevens, John Chalupa, and Bree Nasti added to the staff will give us a great opportunity for success this season.” The Elizabethton River Riders debut this season on June 2 against the Johnson City Doughboys. For more information on the team go to elizabethtonriverriders.com or call the office at (423) 547-6443.