Criteria, timeline set for hiring of new Director of Schools for county 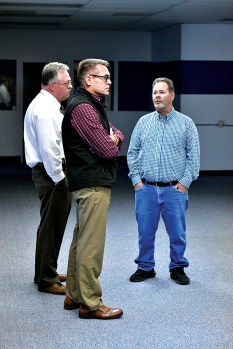 File Photo/Ivan Sanders Carter County Board of Education members (L-R) Chris Hitechew, Tony Garland, and Danny Ward talk during a recent tour of the CTE faciluty. The BOE has dove into the business of hiring their second Carter County Director of Schools as Dr. Tracy McAbee, hired in 2020 just before the onslaught of COVID-19, has taken the same job with the Lewis County, TN school district.

Carter County schools will begin accepting applications for Director of Schools on May 18 with the goal of having someone hired by June 16.

The Board of Education met in a special called meeting Monday to set the criteria and timeline for hiring a replacement for Dr. Tracy McAbee, who will be the new Director of Schools in Lewis County.

Board chairman Tony Garland presented a rough draft to the Board of Education for a potential job posting.

“I think the best thing is to have the resumes sent to Amanda Scalf and we will not open until we reconvene and open the resumes collectively as a group,” Garland said.

Two items the board agreed on was the applicant should have a required doctoral degree in education and preferred administrative experience.

Board member Chris Hitechew also suggested that each applicant submit a letter of interest as well as a vision statement for the school system.

Garland advised the board that they would need to first have an official resignation from McAbee which should come (Tuesday) either by a call or email.

“We will then open up the resumes in a special called meeting at 5:30 p.m. on May 31 and make copies for everyone,” said Garland. “We will take those and digest those and come back with a short list of three candidates on Monday, June 6.”

The three candidates will be notified on June 7 and an interview will be scheduled with each for June 14 at the Central Office from 5 to 7 p.m. for around 50 minutes each.

A new school director should be named by June 16 after a motion to hire and vote by the board which will take place at the Technology Center on Stateline Road.