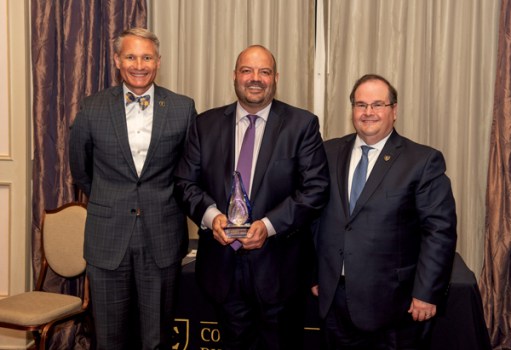 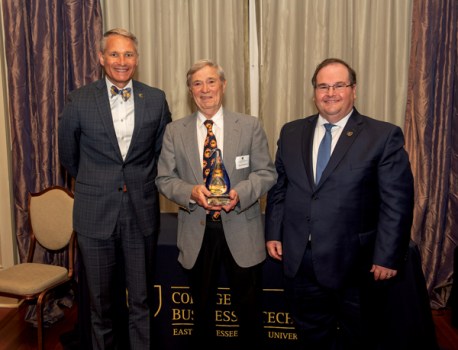 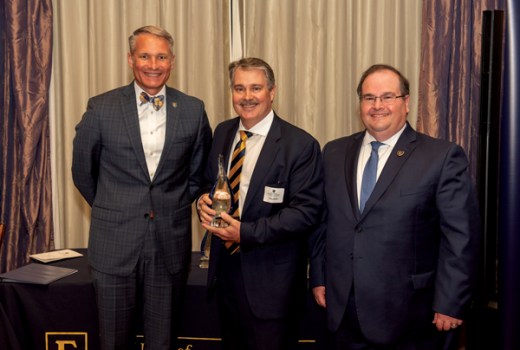 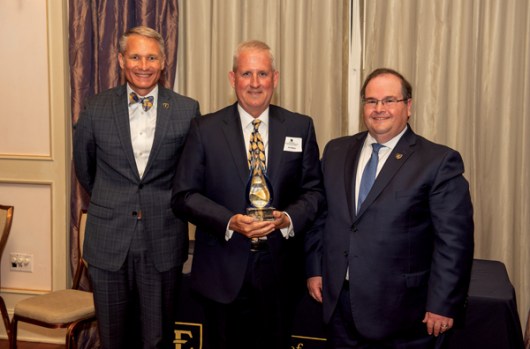 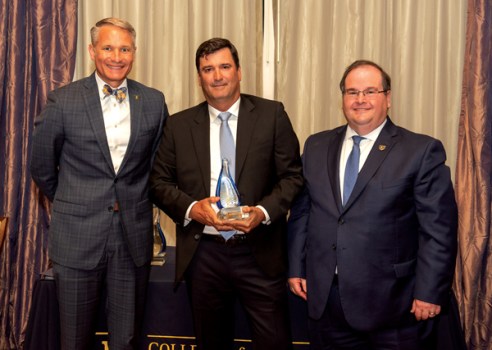 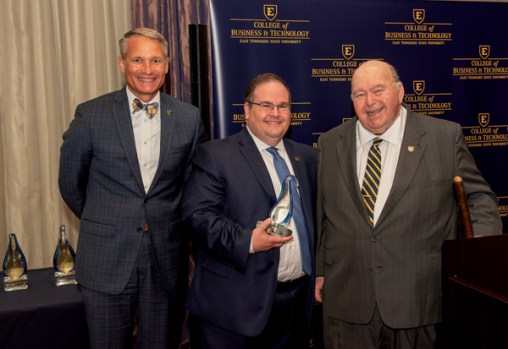 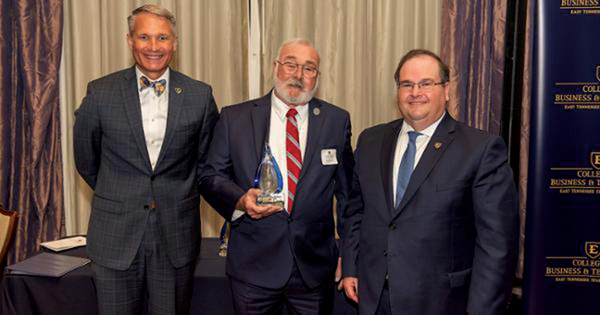 Gaby has over 40 years of experience in computer science and software development, and earned an M.S. degree in computer science with a concentration in software engineering from ETSU through a distance learning program. At the time she earned her degree, she was employed at the Y-12 National Security Complex as a software developer. Shortly after, Gaby’s career shifted to focus on database design and implementation. She later became an in-house consultant, assisting various project teams with database development issues, as well as continuing to design and implement database solutions.
In 2004, after 31 years at Oak Ridge, she retired from the Y-12 National Security Complex. In 2005, she joined the University of Tennessee-Knoxville as a software developer. Gaby retired from full-time work at the end of 2020. While attending ETSU, Gaby and her late husband, Willard, lived in Roane County. In 2019, they moved to Maryville, where she still resides.

Milhorn joined the Federal Deposit Insurance Corp. (FDIC) in July 2018 as chief of staff for Chairman Jelena McWilliams. In January 2020, the board of directors confirmed his appointment as chief operating officer. Throughout his tenure at the FDIC, Milhorn focused on improving operational discipline and efficiency, updating the FDIC’s legacy information technology, and supporting innovation within the FDIC and the financial services sector. Milhorn managed the development and execution of the FDIC’s $2.2 billion annual budget, including the initiation of operational reviews for key divisions to measure performance and promote collaboration.
Prior to joining the FDIC, Milhorn worked for Raytheon Co., where he was the acting vice president of Government Relations, coordinating policy priorities at the federal, state and local levels. Prior to Raytheon, Milhorn served in several positions in the U.S. Senate, including staff director and chief counsel for Sen. Susan Collins on the Committee on Homeland Security and Governmental Affairs, and as general counsel for the Select Committee on Intelligence. Before joining the Senate, Milhorn held several positions in the Office of General Counsel at the Central Intelligence Agency. He holds a Bachelor of Science in economics from ETSU, and a Juris Doctor, cum laude, from Cornell Law School.

Wilson spent over 30 years in corporate America working for Fortune 500 companies. He is now a successful private business executive and entrepreneur in Johnson City.
In 1991, while completing his MBA at ETSU, Wilson joined Eastman Chemical Company and worked in various engineering and project management roles during the first half of his service there. In his final role as director of Global Procurement, he led a global team that managed a direct spend of over $2 billion and reported to the chief procurement officer.

In 2018, after retiring from Eastman, Wilson joined private business as a key leader for top-performing Inc. 5000 company Retail Service Systems (RSS). He is currently the chief project engineer for their BoxDrop Mattress and Furniture business as well as being general manager for their Tennessee Hills Distillery venture. Wilson is an owner of the national bioPURE™ franchising company, an owner of the BoxDrop Mattress & Furniture franchise in Johnson City with his son Kyle, and part owner of the Tri-Cities bioPURE™ franchise with his son Tyler.
Wilson holds a bachelor’s degree from the University of Tennessee in electrical engineering, and a master’s in business administration from ETSU, where he graduated summa cum laude.
A native of Asheville, North Carolina, Wilson and his wife reside in Johnson City and have two adult sons, two daughters-in-law and one grandson.

Drs. Terry Countermine and Allan Spritzer were both recipients of the Faculty Lifetime Achievement Award.
Countermine joined the ETSU faculty in 1990. In 1995 he became chair of the Department of Computing and served in that capacity for 20 years. During that time, he oversaw the addition of the information technology and information systems concentrations. Under his leadership, both concentrations received ABET (Accreditation Board for Engineering and Technology Inc.) accreditation.

Countermine was instrumental in starting the PASTA Program at ETSU. PASTA (Providing Area Schools with Technical Assistance) was started in 2003 and works to provide local schools with refurbished computers for the classroom. Since its origin, the PASTA program has donated over 17,000 computers to local K-12 schools that need up-to-date technology.
Because of his work and dedication to the PASTA program, Countermine was awarded the Tech Star Award for Innovation in the Utilization of Technology in 2006. In 2008, he received the Howard Love Outstanding Community Involvement Award presented by the Tennessee Higher Education Commission. The award recognizes outstanding community service performed at the campus level. Countermine received his Doctorate of Education in computer science from Pennsylvania State University in 1973. He earned his Bachelor of Science in mathematics from Alliance College in 1965.

Countermine now resides in Jonesborough with his wife, Sandy. They have two daughters, Kelly and Molly, and three grandchildren, Finley, Leo and Eli. Countermine has served as an alderman for the town of Jonesborough since 2000.

Spritzer has served ETSU, the Northeast Tennessee region and beyond for more than 40 years. He arrived at ETSU in August 1981 to become dean and professor of management in the College of Business. In 1999, he was selected as the Allen and Ruth Harris Chair of Excellence in Business, which he held until his retirement in 2020.
In 2012, Spritzer received an Outstanding Scholar Award from and was elected as a fellow of the American Society of Business and Behavioral Sciences. In 2020, the university awarded him emeritus status for each of the three positions that he held during his long career at ETSU. In November 2021, the ETSU National Alumni Association selected Spritzer as the year’s Honorary Alumnus.

Spritzer received his Ph.D. from Cornell University, his master’s degree from the University of Illinois in the field of industrial and labor relations, and his bachelor’s degree in economics from the City College of New York. Spritzer was married for 42 years to the late Cecilia McNutt Spritzer. He has one son, Shaun Pezant, and a grandson, Evan.

William Henry Bailey and Dr. Robert A. (Bob) Justice each received the Excellence Award, presented to individuals whose work has brought distinction to the College of Business and Technology.

Bailey is the executive vice president and chief strategy officer for Utegration LLC. He has more than 30 years of tenure in the utility industry sector and in his current role, he manages a team of SAP experts across North America. His responsibilities include software product development, software roadmap alignment, and go-to-market strategies for the utility and energy markets. Through his experience with software development, Bailey was able to obtain two patents. The first was an Air Quality Monitoring Systems and Software Process (#5,468,968), and the second was for a Sample Containment Card for Air Monitoring Stations (#5,635,403).
Bailey earned his Bachelor of Science in computer information science at ETSU and an Associate in Science in computer science technology from Walters State Community College.

Justice spent 32 years with the ETSU Tennessee Small Business Development Center — two years as assistant director and 30 years as the director. During this time, he assisted hundreds of individuals in starting or expanding business ventures.
Justice served on the board of directors of the Tanasi Center of Northeast Tennessee in Unicoi County, as chair of the Loan Committee for the Northeast Tennessee Economic Development Corporation, and as a member of several sub-committees of the Johnson City Development Authority. In 2012 he was elected to the board of examiners of the Tennessee Center for Performance Excellence.

The Horizon Award is presented to graduates of the College of Business and Technology establishing noteworthy careers in business. The 2022 recipient is Juan DeAngulo.
DeAngulo is a managing partner at Elion and a member of its Senior Management, Asset Management and Investment committees. Since joining Elion, DeAngulo has developed the firm into a vertically integrated, institutional-grade real estate investment platform, managing more than $3 billion in gross real estate assets.
DeAngulo earned the Owner/Presidential Management certificate from Harvard University’s Graduate Business School and a certificate from Harvard University’s School of Design Advanced Management Development Program. He earned his Master of Business Administration from Regent University and his Bachelor of Business Administration with honors in economics from ETSU. He was also a member of the men’s varsity tennis team. DeAngulo currently resides in Coconut Grove, Florida, with his wife Polly and family.

To learn more about academic programs available at the ETSU College of Business and Technology, visit etsu.edu/cbat.