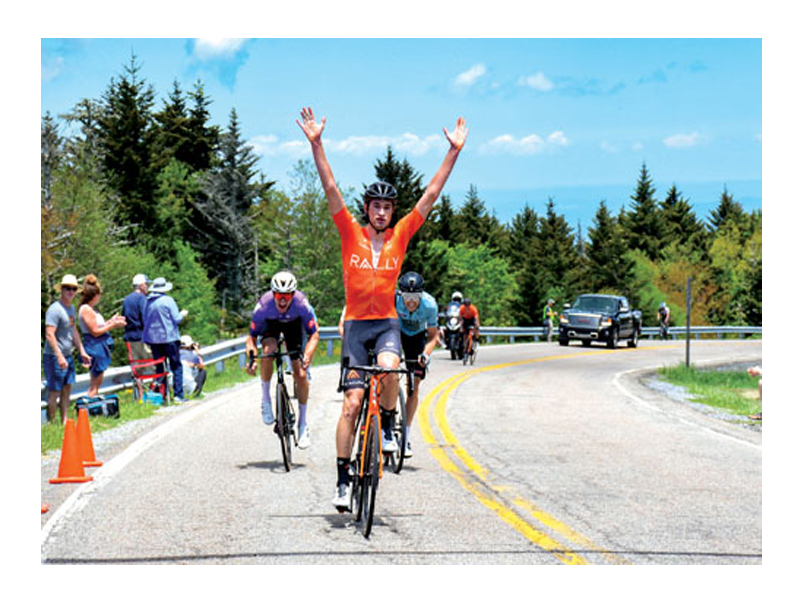 Several professional bicycle races are at the top of the list of activities downtown Elizabethton this weekend.
The Carter County Omnium will be held today and Sunday with three races in Carter and Unicoi County. The Roan Groan got underway Saturday morning at 8:30 with races beginning at Cat Island Park, heading north on Main Street to the Veterans Monument, onto Elk Avenue and then onto Highway 19-E.
The various categories of racers will wind through areas of Carter County, including Simerly Creek Road, to Roan Mountain, with distances ranging from 30 to 80 miles for the Pro 1-2 field. That group also has 9,747 feet of climbing. All of the groups end up with a race up Tenn. Hwy. 143 to the finish line at Carver’s Gap, a category 1 climb of 2,580 feet.

The Tri-Cities’ largest cycling event, the Carter County Omnium is a three-race event that offers cash prices over $12,000 and is highlighted by the Roan Groan, the premier road race in the area. Racers are expected from 25 states and as far away as Australia.
The Ballad Health Time Trial begins at 2030 Temple Hill Road, Erwin. The time trials begin at 5:30 p.m. The course is 3.2 miles, with a 1 mile climb averaging 4.0% and a 6.7% descent of .5 mile.

Sunday’s event is the Carter County Bank Criterium. It will be an all day competition in downtown Elizabethton. The half-mile course has four turns and runs from Hattie to Sycamore to E Street to Riverside. There are plenty of fast sections with high speed corners.
The races begin at 8:20 a.m. on Sunday and will continue until 5 p.m. Major Jerry Bradley of the Elizabethton Police Dept. said that while there is not a lot of businesses open along the route on Sunday, there are two churches inside the perimeter. He said the police department will be directing traffic around the race circuit. Police will direct traffic and work to prevent bike vs. car incidents.
The Carter County Omnium participants can pick up their race packets at the Riverside Taphouse.