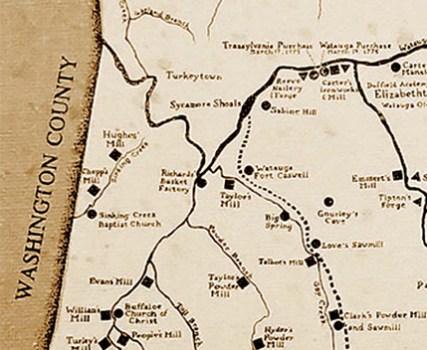 Bob Peoples, just returning from a very disappointing outing at his last deadlift competition in the far away city of Detroit couldn’t help but feel a little sorry for himself.

He was frustrated that his nearly year’s worth of training yielded no results. As he settled back into his daily routine of the Rayon mill, farming, and family he began to question his next move. Should he even continue to compete at his nearly 40 years of age?

But when he received the amazing news that he was being invited to compete in neighboring Johnson City, he was ecstatic. Peoples never had the chance for his friends and family to see his phenomenal strength tested on the competitive stage.

Weightlifting was not very popular in the region and powerlifting (of which the deadlift would become one of the three lifts of that sport) was not even officially organized yet.

Competitions were usually only held in large cities where lifters from many miles around could be drawn creating enough interest for the event. This would be the only time in his life where the Tennessee Hercules would be able to lift in front of his people.

Sinking Creek was a small farming community nestled in the rolling hills along the small stream which gave the area its name. Despite being in Carter County, it is closer to Johnson City than Elizabethton lying just beyond the city limits.

Sinking Creek didn’t just happen to be home to possibly the oldest church in Tennessee, some beautiful family farms, and a curious creek that often sank underground in the holes and tunnels worn into the soft limestone rock, but it was also home to the strongest man in the
world at the time, Bob Peoples.

But other than that, the area was of little significance.

In 1774, John Carmack became the first official settler of the area when he had 470 acres surveyed along the creek. Within a year, the Denton family followed suit, and before long the Talbot, Mulkey, Kelley, Hughes, and Ausmus families joined as well.

We are not certain exactly when, but we know the Peoples family made their way to Carter County before the end of the 1700’s. The Peoples name is a Scots-Irish one that is quite easy to trace back to its roots in the old country.

Looking up a history of the surnames will show that it has both Scottish and Irish roots which is easily reconciled. The English hated the Scots who live in the north of their island, but quite possibly they hated the Irish who lived just across the water on their smaller of the British Isles.

To summarize a very long and intricate historical soap opera, the English rulers wanted to rid themselves of powerful Irish Catholic families, so they sponsored the resettlement of protestant Scotts to Ireland.

This handled two issues at the same time, Scottish people would be moved further away from England, and they would replace the
even more reprehensible Irish.

The Peebles clan originated from a small region along the Tweed River in southeast Scotland. The name gets its origin from the word “tent” or “pavilion”. When many of the Peebles family moved to Ireland under the state-sponsored resettlement, the word became mixed with a more traditional Irish spelling and became “Peoples”.

But just how did the Peoples family end up in the hills of Tennessee?

A drought and ensuing famine struck Ireland and by 1717 many Scots Irish were looking to the new world for greener pastures. Between 1717 and 1775 over 200,000 came to the American colonies in five great waves of migration.

The later waves were forced to go further inland to find land traveling down the Great Wagon Road (which began in the port of Philadelphia) into Virginia and the Carolinas. It was just a short trip on the newly developing Wilderness Road over the Appalachian Mountains into freedom out from under the prying eyes of the English crown.

So, Bob Peoples’ forefathers were hardy and intrepid pioneers from Scotland and Ireland who moved here for a better life, but a free life did not mean one without hardship.

Existence on the frontier was difficult with Indian attacks, lawlessness, and the hardships of nature to contend with. But the Scotch Irish settlers were known for their industrious spirit.

The Peoples family and their neighbors would need all they could muster to scratch out an existence in those early years. The southern Appalachian are close enough to the equator to welcome an early spring, but the altitude from the mountains means the temperature is very fickle.

What might be nice 50- and 60-degree days can plummet into 20 degree nights of killing frosts that destroy all the early blooms and lead to lean harvests.

The Cherokee people were divided into smaller bands under the sway of dozens of feuding chiefs so that signing a treaty or having peace with one group did not provide safety from attack by another. There were no government services from the far away Royal Colony of North Carolina and as they were living outside of the Proclamation Line set by the king; there would be no aid.

If Indians attacked, the locals would have to form their own militia or die. If vandals or thieves beset them, then posses would have to
be organized. If food was scarce, then families depended on one another. There was no one coming to their rescue.

It was within this tight knit community of families that survived the frontier for 150 years that Peoples now found himself. He would get the chance to perform in front of them for the first and only time.

But if Peoples thought his friends and neighbors would be easily impressed, then he had another thing coming.