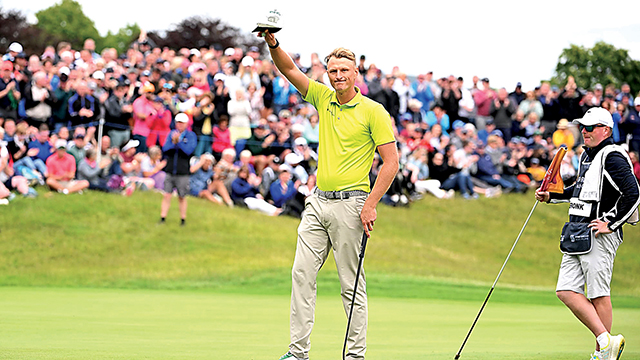 He entered the weekend in second place following back-to-back rounds of 5-under-par (67). Following Saturday’s round, Meronk held on to a one-stroke lead following a 68 (-4) third round score. With 18 holes to play, Meronk was eyeing his first professional win on the DP World Tour.

Meronk played the opening nine holes at 1-under-par (35) and slid into a three-way tie for second with nine holes remaining in Sunday’s finale. The drama continued when he birdied the par-5 10th hole to climb back into a tie for first. However, four straight pars and a scorching 64 (-8) by Ryan Fox saw Meronk trailing the clubhouse leader (Fox) by one stroke with four holes to play.

He has been in this situation before and his poise and patience paid off. The former Buccaneer drained a 24-foot birdie on the 15th hole and followed that up with a 12-footer for birdie on 16, taking a one stroke lead heading into the scoreable par-5 17th hole…and score he did! After finding the first cut of rough on his tee shot, Meronk placed the ball 24 feet away for a look at eagle. The Poland native calmly stepped up and drained the eagle putt, carrying a three-stroke cushion into the final hole of play. Meronk polished off the win with a par on the difficult par-4 18th hole, securing the 2022 Horizon Irish Open in convincing fashion.

Meronk etched his name in Irish Open history alongside past champions of Colin Montgomerie, Rory McIlroy, Seve Ballesteros and Sir Nick Faldo. He will compete in his first Open Championship in two weeks, July 14-17, when the coveted Claret Jug returns to St. Andrews in Scotland for the 150th Open Championship.

For more information on Buccaneer men’s golf visit ETSUBucs.com and click on the men’s golf page.