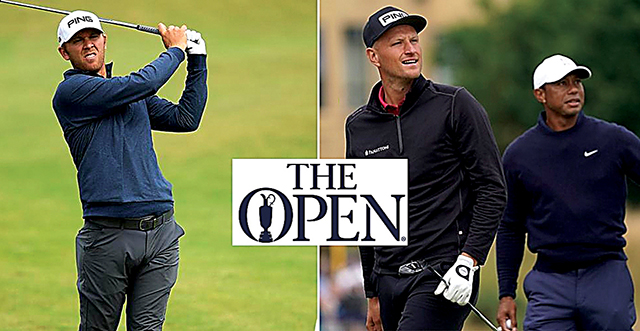 ANDREWS, Scotland – On July 13, 2022, former ETSU alumni Adrian Meronk and Seamus Power are set to make their Open Championship debut this week as first round play gets underway Thursday from historic St. Andrews. This marks the 150th Open Championship.

Tee times were released on Tuesday, July 12. Power goes out at 3:03 a.m. ET on Thursday and 8:04 a.m. on Friday. Power is grouped with Cameron Smith and Brooks Koepka. Meronk starts Thursday’s first round at 6:58 a.m. ET and Friday’s second round at 1:57 a.m. Meronk is paired with Haotong Li and Marcus Armitage.

Power, who has made his debut in all four Majors this season, finished tied for 27th (+4) at The Masters, while finished tied for ninth (-1) at the PGA Championship and tied for 12th (+1) at the U.S. Open. Power, the 2021 Barbasol Champion, is coming off a tie for 30th two weeks ago at the Irish Open and has five top 10 finishes this season. Power is ranked 24th in the FedEx Cup standings and 37th in the World Golf Rankings.

Meronk has had quite the run of it over the last few months as he has totaled five top 10 finishes in his last eight tournaments, including his first win two weeks ago at the Horizon Irish Open. The win marked Meronk’s first career victory on the DP World Tour (formerly known as the European Tour) and he became the first Polish player to ever win on that tour. Meronk, who is currently ranked No. 7 on the DP World Tour Rankings and 65th in the world, played nine holes with Tiger Woods earlier this week at St. Andrews.

This marks Meronk’s second Major appearance as he played in the 2021 U.S. Open, while he also made his Olympic debut last July.

Fans can watch the first two rounds of the Open Championship on USA Network, starting at 4 a.m. USA will also carry early third round action on Saturday from 5-7 a.m. ET, while the coverage turns to NBC from 7 a.m. – 3 p.m. Sunday’s final round will start on USA from 4-7 a.m., with NBC picking it up from 7 a.m. – 2 p.m. Fans also follow all the action by visiting theopen.com.