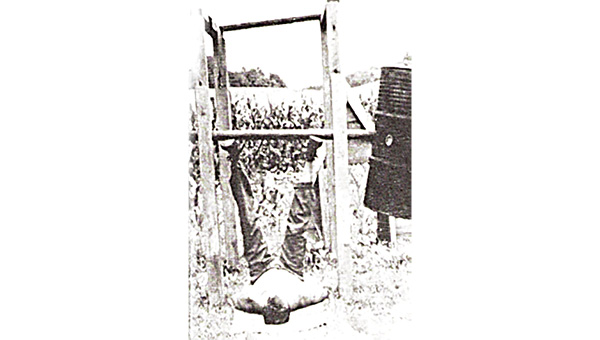 Bob Peoples was called upon to not only lift in front of his friends and family but also help raise money for the local youth at the Johnson City Red Shield Boys Club as well. As he planned to storm the stage at the Red Shield Variety Show in the neighboring city in a few months, he was determined to put on a show for the ages.

Peoples always worked hard in training. You can look through his workout logs to find weights, sets, and reps that would crush a normal man. Despite all this hard work, he was still unable to produce a personal best at his last competition in Detroit. So, Peoples put his most powerful muscle, his mind, back to work like never before. This time it would devise new workouts and exercises that most people would consider inhumane. If terrorists in Guantanamo Bay were to be subjected to his routines, it would be called torture, and if prisoners were forced to do his workouts, they would consider it cruel and unusual punishment.

To get even more leg drive, Peoples created a type of leg press. Currently, leg press machines are a staple of many commercial gyms, but these modern types are so much easier than the ones he created. Today they use wheels and rollers and are on a 45-degree angle which means the lifter is only experiencing the forces of about half of the weight that is on the machine. Peoples devious mind, however, devised a way to load up a barbell and then lay with his back on the floor underneath it. He didn’t have room for it in the basement, so he set it up in the backyard in front of the corn field. He then placed his feet on the bar and pushed it directly upwards with his legs. This means that whatever weight he loaded up, and he loaded up plenty, he would feel the full weight of it unlike today’s machines. He also had to balance the bar properly on the soles of his feet making it even more difficult than modern machines as he had to work his stabilizer muscles just to keep from being crushed.

Peoples also developed what he called his “ring bar,” which is the forerunner of the modern-day hex bar for deadlifting. These types of bars instead of being strait are usually hexagon or diamond shaped where the lifter can actually get inside of the hexagon. This enables the lifter to have the weight directly over the hips. This makes the lift easier as the weight is not out in front of the body. But he didn’t design anything to be easier, so he had another reason to design his circular bar. He would complete these special deadlifts while standing on a small box. When he lowered the bar down, he could let it continue past where it would normally rest on the ground to a point even below the bottoms of his feet, because he was standing on the elevated box. This movement compresses the lungs and squeezes out all the air making the lifter want to pass out. It also causes extreme flexion in the lower back while also putting the body in a very poor position of leverage. This was the hardest deadlift anyone could invent, and this is exactly what Peoples was looking for. He was going to push his body to the very limits to perform well in front of his hometown crowd.

Peoples invented half of the equipment one could find in a modern gym, just as an aside to help him push his body to new heights. But he was far from the end of his mental limits when creating inventive ways to train his body. Once, Peoples looked curiously at Sinking Creek which ran at the front of his property. Any other person would have just seen a small babbling brook with a quaint little swinging bridge over it, but with Peoples, he saw just another way to push his body to the limits.

For years, Peoples used steel barrels suspended off chains hanging from a huge metal pipe. He loaded those barrels down with all manner of concrete blocks, steel, and rocks. When he saw that swinging bridge over the creek, he had an idea. He took his barrels out into the yard and put them on a rack. Then he would get under the bar, take it out of the rack, and walk it over the suspension foot bridge that crossed it. One time, Peoples’ good friend Bob Hise drove up from near Chattanooga to visit. As he pulled into the yard, Peoples had over 500 pounds loaded into his barrels and resting on the rack in front of the creek. Hise was absolutely terrified.

Peoples put the bar across his shoulders and took it out of the rack. Then he began to steadily plod toward the creek. As Peoples placed his first step onto the bridge the boards creaked and cables groaned under the almost 700 pounds of combined weight. As the continued toward the center of the bridge where the stress would be the greatest, the boards began to deflect as some of the weakest boards let out tiny cracking sounds. Hise just knew that he would be picking up the remnants of his friend from the creek crushed under 500 pounds of steel and barrels, but to his surprise, the bridge held. Peoples made his way to the other side safely as Hise let out a huge sigh of relief only to be quickly thrown back into abject terror at what happened next.

As Peoples stepped off the bridge and back onto the relative safety of the solid ground, he made a turn and started back toward the creek. Hise knew he tempted fate the first time, but to return across the bridge would be to risk suicide. Hise was prepared to plead with his friend to stop this madness, but the words stuck in his throat as he saw Peoples determination to head back across the bridge. Where would he put down the weights if he stopped now anyway? Peoples headed back across the creek with the bridge swaying under the load each time he took a step and shifted the weight to his other foot. The bridge creaked, groaned, and cracked, but once again held as Peoples made it safely to the other side. He loaded the weight back into the racks and collapsed to the ground.

Hise ran over to his friend to check on him. As he rolled Peoples over, the Tennessee strongman was panting and huffing while his body trembled. Hise implored for him to say what exactly he thought he was doing trying such a crazy stunt. Between the panting, Peoples in his dry sense of humor replied. “That’s what I call ‘building super strength’.”

There could be no question that Peoples was pulling out all the stops to not only raise his strength to new levels while putting on the show of a lifetime for his friends and family to raise money for the local youth and their Boys Club. But Mr. Deadlift still had more training to do, more barriers to push, and a few more ideas about how to push his body even further.