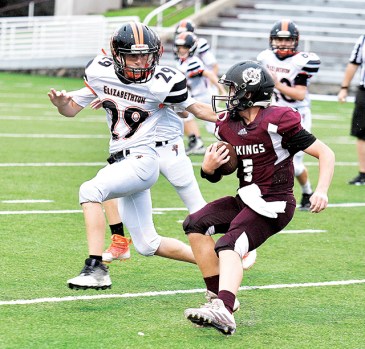 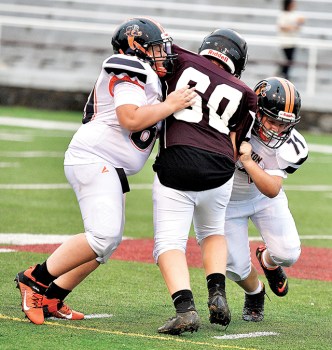 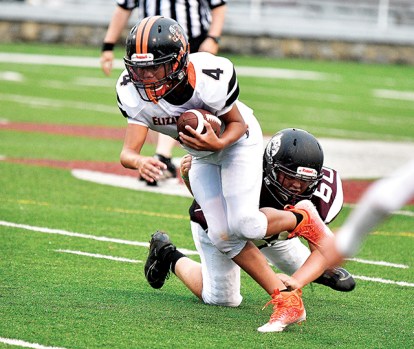 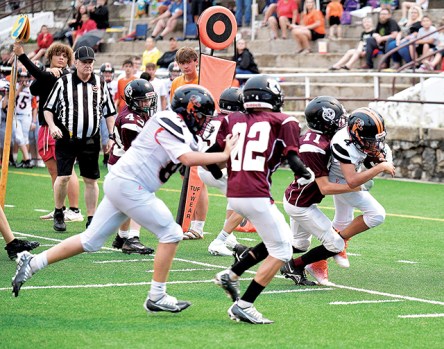 Star Photo/Ivan Sanders JV Cyclone quarterback Legend Pate takes the football to the four-yard line before punching the ball across the goal line for the first score of the game for the TAD JV.

STAR CORRESPONDENT
BRISTOL – The T.A. Dugger JV football team was looking to repeat the outcome of the varsity’s contest by downing the home standing Tennessee Middle JV team.
However, that wouldn’t be the case as the Jr. Vikings made a 16-6 first half lead hold up to fend off the Jr. Cyclones in the second half to take a 16-12 victory inside the Stone Castle in Bristol.
The Jr. Vikings jumped out front 16-0 before the JV Cyclones rallied just before the end of the first half to narrow the gap to 16-6.
Quarterback Legend Pate led the Jr. Cyclones down the field including one spectacular run where Pate broke several tackles for a large gain.
After carrying the ball down to the four-yard line of Tennessee Middle behind his big offensive line, Legend crossed the goal line standing up as the two-point conversion failed as the first half came to an end.
The Cyclone defense bowed their necks in the second half to hold the Jr. Vikings out of the end zone in the second half while trying to rally for the win.
Pate would find the end zone once again in the final half but the two unsuccessful two-point conversions proved to be too much to overcome as the Jr. Cyclones dropped their season opener.
The TAD JV will take the field again next Thursday when they follow the varsity game with Boone Middle on their home turf.