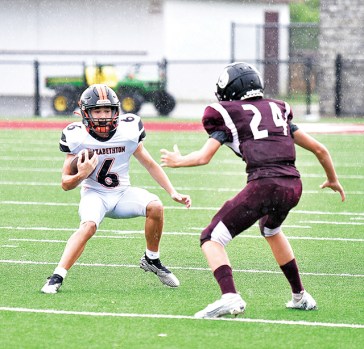 Star Photo/Ivan Sanders Braylon Britt shakes off a Tennessee Middle defender on his way to a 65-yard kickoff return for a Jr. Cyclone score. 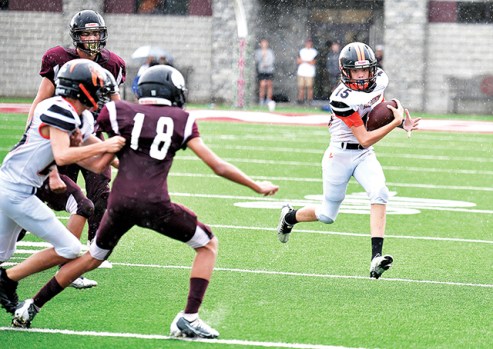 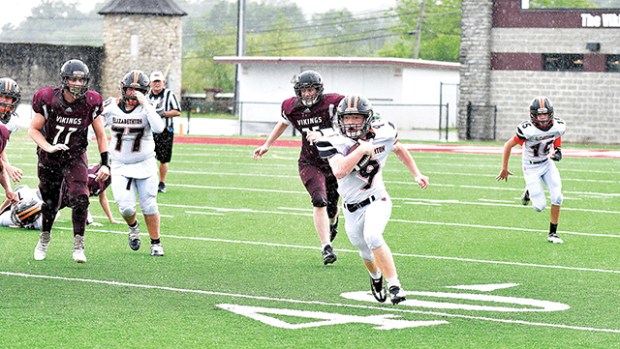 Star Photo/Ivan Sanders CJ Mathes breaks loose for a 60-yard scoring gallop to put the Jr. Cyclones ahead 14-8 at the half. 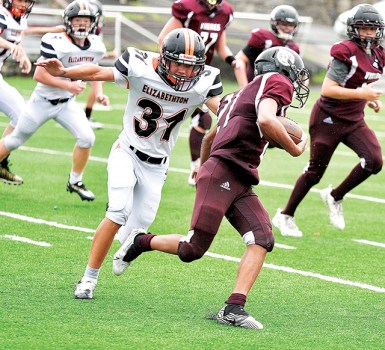 Star Photo/Ivan Sanders Uriah Matheson of TAD closes in to put the stop on a Jr. Viking running back. 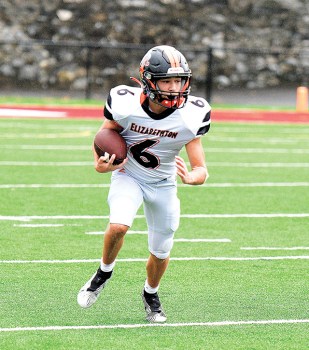 Star Photo/Ivan Sanders Braylon Britt turns up the field after hauling in a screen pass for a critical first down in the second half. 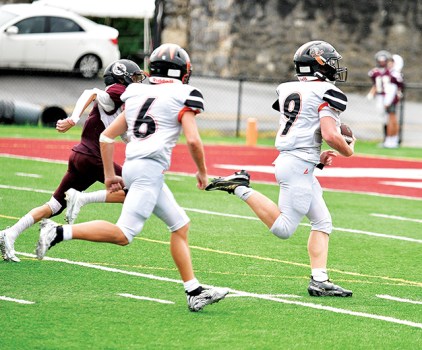 Star Photo/Ivan Sanders CJ Mathes turns on the afterburners to score the game-winning touchdown for the Jr. Cyclones. 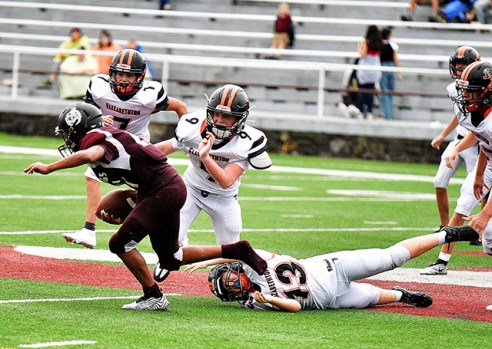 STAR CORRESPONDENT
BRISTOL – If the opening game of the 2022 Middle School football season was any indication for followers of the T.A. Dugger Jr. High Cyclones, one might consider bringing a tank of oxygen and some smelling salts with them to the games.
Coming up with a key goal line stand at the end of the first half and two big fourth down stops in the second half, the Jr. Cyclones entered the Stone Castle in Bristol and came away with a heart-stopping 20-16 victory in their season opener.
“They fought and I knew we were going to be tested today because Tennessee Middle has a solid team,” said Jr. Cyclone head coach Brock Pittman. “We saw that last year and we saw that last Saturday when they came over for the jamboree.  Just super proud of the kids. There was a lot of adversity. We turned the ball over more times today than we did all last season on offense.”
Tennessee Middle put the first points of the season on the board against the Jr. Cyclone defense with three minutes left in the first half. The two-point conversion was good and the Jr. Vikings led 8-0.
TAD didn’t let the score more than show up on the scoreboard before they responded on the ensuing kickoff when Braylon Britt took the kick and weaved his way through the Jr. Viking kicking unit and bolted down the Jr. Cyclone sideline on his way to a 65-yard scoring return.
William Bowers’ extra-point attempt made it an 8-7 contest with 2:50 showing before the half.
The Jr. Cyclone defense made a terrific stand against the Jr. Viking offense to get the ball back in the hands of the offense just before the break.
C.J. Mathes made the Viking defense pay as he took an inside handoff and outraced the Tennessee defense on a 60-yard scoring jaunt with 30 seconds left before the half.
Bowers’ kick was true and TAD took a 14-8 lead.
Tennessee was determined to re-seize the lead but the Jr. Cyclone defense was up to the task and threw the Jr. Viking running back to the turf at the one-yard line as the first half came to an end.
“Our defense was put in tough spots and they fought and fought. That defensive stop at the end of the first half was huge. We knew we were getting the ball back in the second half with momentum and then we had that turnover putting our defense in a tough spot,” Pittman said.
After a scoreless third quarter, the Jr, Vikings took advantage of a Jr. Cyclone fumble on a short field to retake the lead on a 25-yard run with 7:31 remaining to play. The two-point conversion was good and the scoreboard read 16-14 in favor of the Jr. Vikings.
Once again, the Jr. Cyclones showed resilience as they put the ball back into the breadbasket of Mathes and he didn’t disappoint as he scrambled for a 40-yard score with 6:19 showing on the game clock. The point-after was no good after a bobbled snap with the Jr. Cyclones clinging to a 20-16 edge.
The Jr. Cyclone defense rose to the occasion late in the contest shutting the Jr. Vikings down on a fourth down with 1:30 left to play and the TAD offense took care of moving the chains to allow the game clock to expire for the win.
Pittman said that Jr. Cyclone fans can prepare for games like this all season.
“It was a great football game and it’s probably going to be like that next week as well. The coaches did a great job of keeping fresh kids in there. These kids have the guts and that is what it takes to play this game,” said Pittman.
TAD plays host to Boone Middle at 5:30 p.m. on Thursday, Aug. 18th.