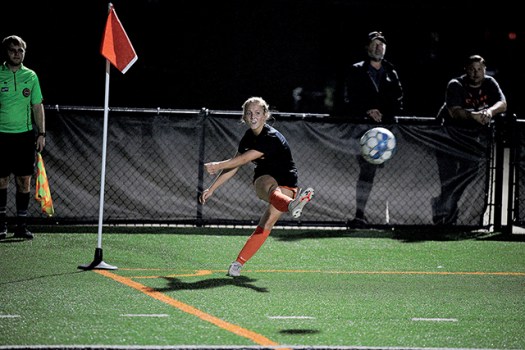 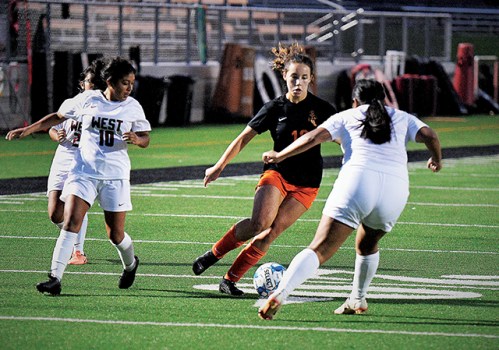 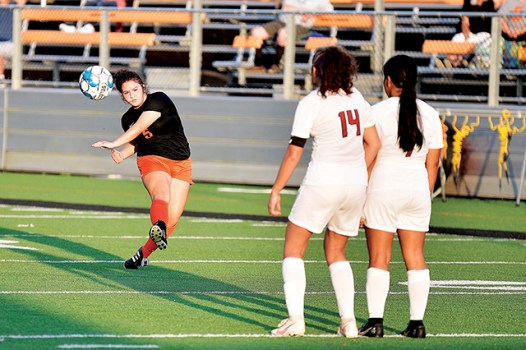 Star Photo/Ivan Sanders Shayla Orellana blasts a free kick toward the nets as the Lady Trojans set up a wall to block a potential goal. 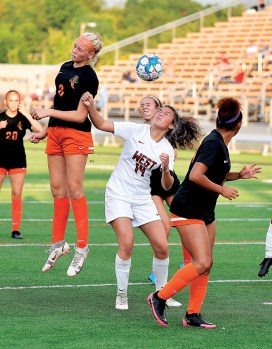 Star Photo/Ivan Sanders Elizabethton's Camdyn Garland attempts to head a corner kick toward her teammate Kaiya Simmons who is positioned at the front of the goal. 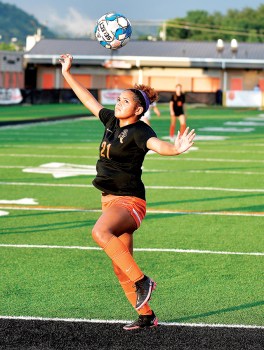 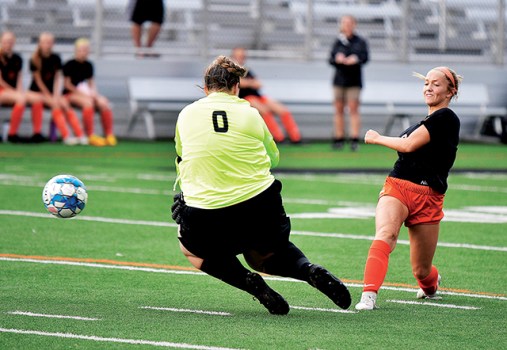 Star Photo/Ivan Sanders Mollie Johnson attacks the goal for Elizabethton as the goalie for Morristown West comes out to challenge the attempt.

STAR CORRESPONDENT
It was a tale of two half’s on Tuesday evening at Citizens Bank Stadium in the season-opening match for the Elizabethton Cyclones and the Morristown Lady Trojans on the pitch.
The Lady Cyclones dominated the first 40 minutes of action while the Lady Trojans regrouped during the intermission and came out of the break to quickly erase the 2-nil lead held by Elizabethton while putting three balls into the net in the final 40 minutes to take a gifted 3-2 win.
Elizabethton was in attack mode in the first half as the Lady Cyclones hardly allowed any play on the other side of the mid-field stripe.
Izzy Lewis got the Lady Cyclones the lead at the 19:21 minute of the first half as ‘Betsy went up 1-nil. The Lady Cyclones missed several opportunities to add to the lead as they had some breakaways where the ball was either led to far or just misplayed all together.
Kiaya Simmons helped to extend the Lady Cyclones lead just 4:53 before the break when Simmons took the ball on the fly and beat the Lady Trojan’s goalie who had came out to attempt the stop.
The goal staked the Lady Cyclones to a 2-nil advantage at the intermission.
Coach Lauren Meier made some personnel changes at the break and the Lady Trojans took advantage coming out of the locker room. West buried a goal just 1:47 into the half to slice the lead in half at 2-1 at the 41:47 minute of the game.
The Lady Trojans continued to attack the Cyclone net as they evened the score at the 50:37 mark of the contest to make it a 2-2  match.
Morristown West took the lead for good at the 61:55 minute of the contest to lead 3-2. The Lady Cyclones just didn’t have enough in the tank to even the game down the stretch and suffered the loss.