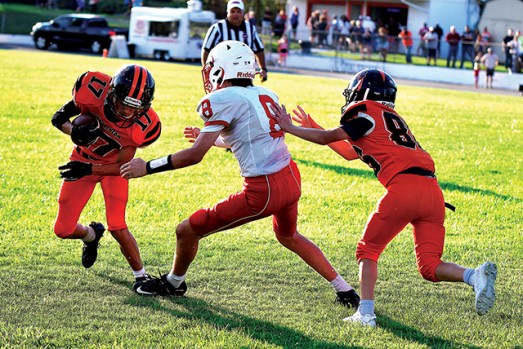 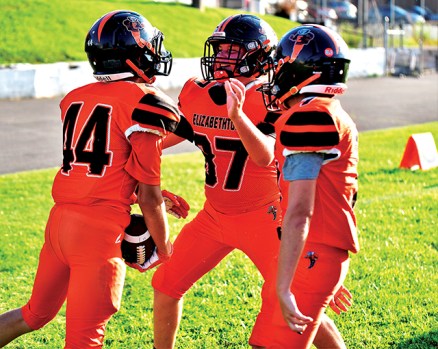 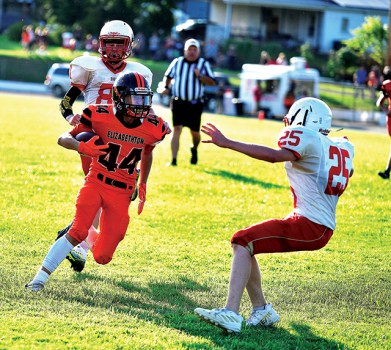 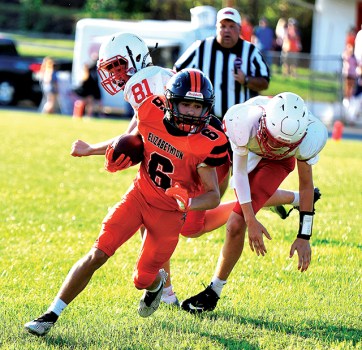 Star Photo/Ivan Sanders Braylon Britt takes off for a long gain for the Jr. Cyclones. 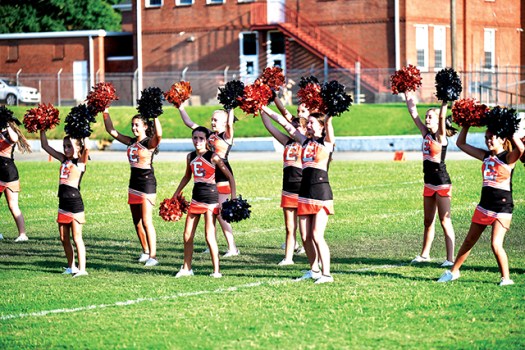 Star Photo/Ivan Sanders The T.A. Dugger cheerleaders pep up the Jr. Cyclone fan base during Thursday's game with Boone. 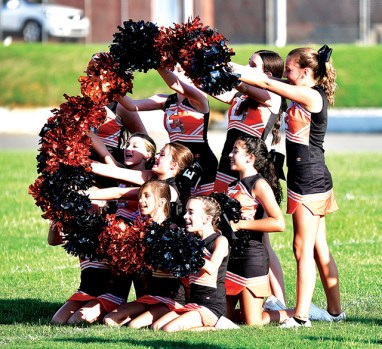 Star Photo/Ivan Sanders The Jr. Cyclones cheer squad spells out Cyclones with their pompoms during halftime of Thursday's game. 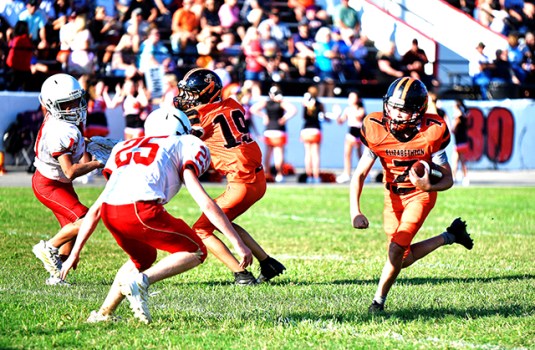 Star Photo/Ivan Sanders William McDuffie takes off for a run that would lead to a Jr. Cyclone score. 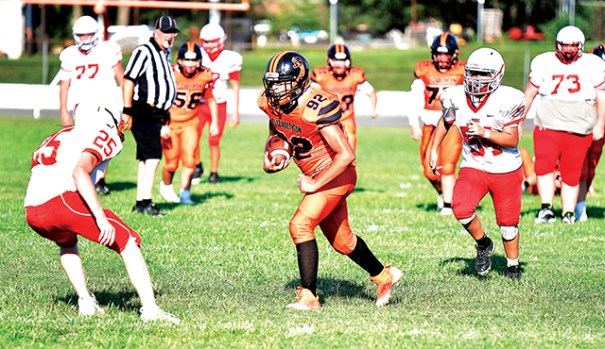 Star Photo/Ivan Sanders Tight end Connor Franklin hauls in a pass and takes off for a big gain. 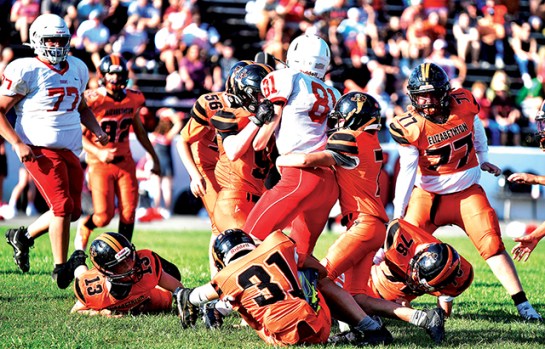 Star Photo/Ivan Sanders The Jr. Cyclone defense was swarming all day against the Boone offense. 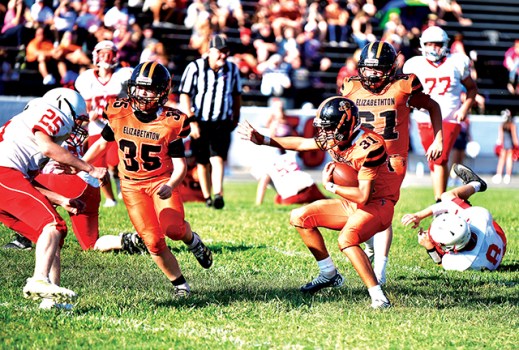 Star Photo/Ivan Sanders Uriah Matheson cuts back across the grain for a great gain on the play.

STAR CORRESPONDENT
Coach Brock Pittman and the T.A. Dugger Jr. Cyclones were looking to keep their early season success rolling on Thursday at Brown-Childress Stadium when they welcomed the Boone Jr. Blazers to Elizabethton.
After a quick response to an early Jr. Cyclone score by the Jr. Blazers, TAD took control and rolled to a 42-14 victory on Dave Rider Field.
CJ Mathes opened up the scoring for the Jr. Cyclones with a six-yard scoring run at the 3:54 mark of the opening quarter. Will Bowers blasted the point-after attempt and T.A. Dugger led 7-0.
Boone answered the score with one of their own on a 17-yard run just 19 seconds into the second quarter. The two-point conversion gave the Blazers a 8-7 edge.
From there the game belonged to the Jr. Cyclones as 50 seconds later Uriah Matheson bolted 31-yards for the score and Bowers PAT moved the Jr. Cyclones back in front 14-8.
William McDuffie added to the Cyclone scoreboard just 24 seconds before the half on a 10-yard scoring jaunt. Bowers continued his good work and TAD went to the locker room with a 21-8 advantage.
After taking the second half kickoff, it would take just one play for the Jr. Cyclones to add to their tally as Braylon Britt took a reverse 60 yards to pay dirt and the rout was on. Bowers remained perfect and the scoreboard read 28-8.
The Jr. Cyclones forced a turnover on the ensuing kickoff forcing a fumble and recovery at the Jr. Blazers 10-yard line.
It took only one play for TAD to cash in as quarterback Jaxon Price found Harrison Hobbs on a 20-yard scoring toss with 7:14 showing on the third quarter clock. Bowers kick was true and the score was 35-8
TAD added their final score in the fourth quarter as Ryan Jones carried the pigskin 15 yards for the score. Bowers put the final points on the board with his PAT. Boone added a 59-yard run for a touchdown with 57 seconds remaining.
The two-point conversion failed and the final score read 42-14.
The tide changed in the contest with a quick response by the Jr. Cyclones after the early Boone score.
“We are relying on our eighth graders, our seniors – I call them seniors here, and we responded right away,” said Pittman. “They were chipping away at us in yardage, and they were giving us an overload set that we weren’t ready for. They did a great job moving the ball and gave us adversity. We had to make adjustments on both sides of the ball and the kids understood and were able to get it done.”
Next week, the Jr. Cyclones hit the road to Kingsport where they tangle with Sevier.