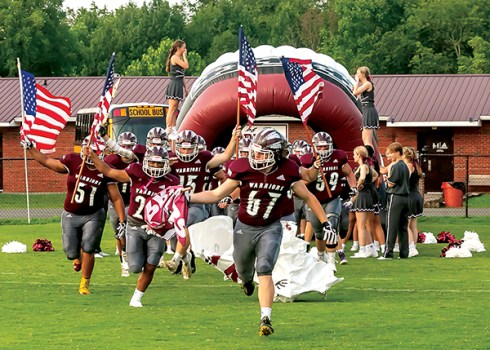 StarPhoto/Larry N. Souders The Happy Valley Warriors take the field for the first game of the 2022 season. They are hosting the Highlanders from Cloudland in an early season showdown. 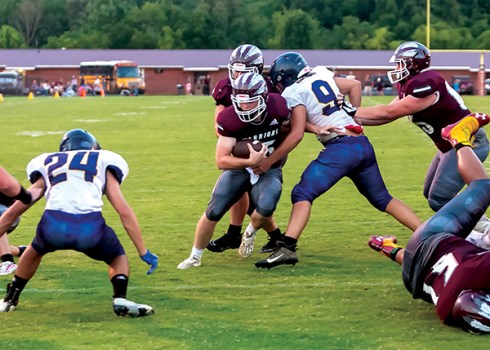 StarPhoto/Larry N. Souders With 7:35 left in the half Warrior quarterback Reagan Ensor (15) finds a hole in Cloudland’s goal line defense and punches it in for Happy Valley’s first touchdown of the season. The extra point attempt failed. 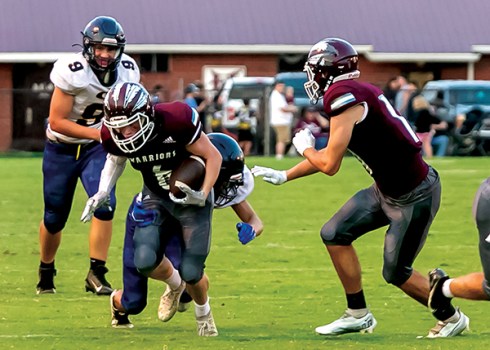 StarPhoto/Larry N. Souders The Warriors freshman wide receiver Gabe McDougald (6) gets outside of Cloudland’s defense on third down and 16, grabs the quick out throw, and races for a first down early in the second quarter. 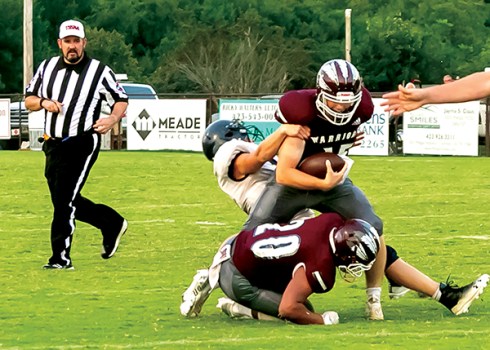 StarPhoto/Larry N. Souders Cloudland’s Kyle Birchfield (7) get past the Warriors Pedro Colunga (20) and sacks quarterback Reagan Ensor (15) for a loss of three early in the second quarter. 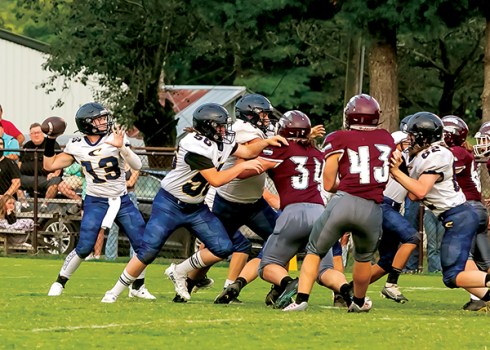 StarPhoto/Larry N. Souders Highlander quarterback Camden Peppers (13) gets great blocking from his front line as he looks deep down field for a receiver early in the first quarter. 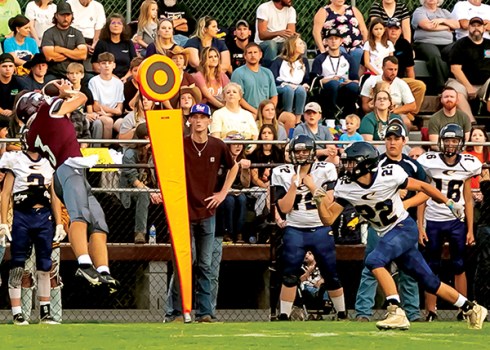 StarPhoto/Larry N. Souders Warriors wide out Drew Blevins (3) gets behind Cloudland’s Elijah Holtsclaw (22) and show mid-season form on a leaping first down catch near the Highlander bench in the first quarter. 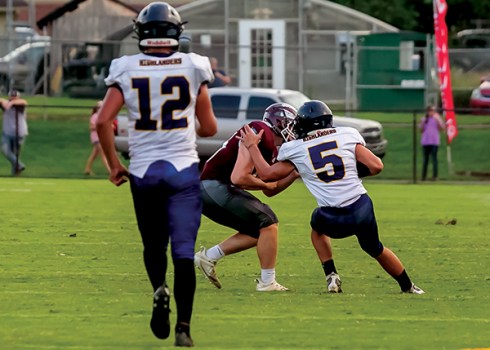 StarPhoto/Larry N. Souders The Highlanders Cayden Clarke(5)steps in front of a Reagan Ensor pass and intercepts it late in the first quarter. Clarke had 30 plus yards on the return. 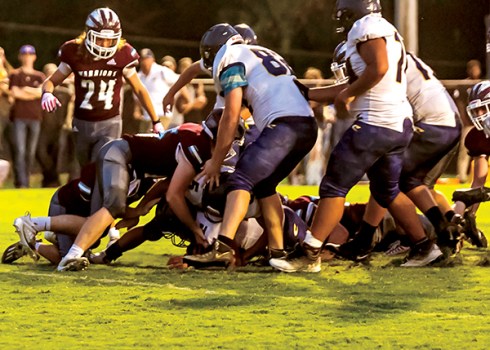 StarPhoto/Larry N. Souders Happy Valley’s goal line defense keep Highlanders Bryce Birchfield (2) out of the end zone on a fourth and five late near the end of the first half. 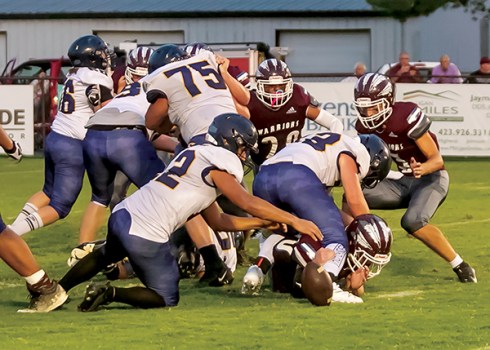 StarPhoto/Larry N. Souders Highlander wide receiver Gage McKinney (12) prevents a near disaster last in the second quarter by falling on a loose ball off a bad snap inside Happy Valley’s ten yard line. 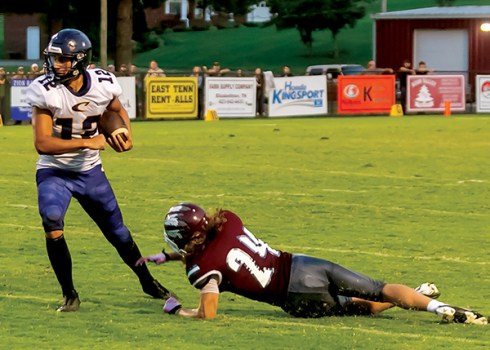 StarPhoto/Larry N. Souders Highlander wide receiver Gage McKinney (12)take a quick out, steps out of the shoestring tackle by Happy Valley’s Ron Paul Parker (24) and gains 32 yards on the play mid-way through the second quarter.

STAR CORRESPONDENT
A penalty plagued contest saw the Happy Valley Warriors overcome eight penalties for 75 yards to hand Cloudland a 22-14 loss on Warrior Hill on Friday night.
Senior Joseph Sowards rushed for 90 yards on 14 carries and a touchdown for Happy Valley while Gage McKinney led all rushers with 107 yards on 13 tries.
“This is an unbelievable win,” Warriors head coach Jason Jarrett said. “We have been at it since January and the guys who played last year, we challenged them to have the toughness and physicality. This bunch is hurting, Cloudland is a tough, physical team and when you beat them, you have done something.”
The first half was a case of poor offensive execution or terrific defense as neither team could move the ball effectively. The Warriors finally began to move the football in the second quarter starting at the 30-yard line from where senior quarterback Reagan Ensor’s 16-yard run moved the ball to the Cloudland 20-yard line.
A 10-yard run from senior fullback Bronson Norman moved the ball to the 10-yard line and a penalty by the Highlanders got HV to the five-yard line. Ensor ran for four yards on first down and scored on a one-yard run for a 6-0 Warrior advantage. The point after kick missed.
The ‘Landers then went on an 83-yard drive that stalled on fourth down from the one-yard line. Gage McKinney had a huge 32-yard run but on fourth and seven got just six and the Warriors held and ran out the first half clock.
Happy Valley had 44 yards rushing in the first half and 25 passing yards while Cloudland had 66 rushing yards and 15 passing.
HV (1-0) scored to open the third period with Cole Deakins high pointing a pass from Reagan and finishing a 39-yard scoring play for a 14-0 Warrior lead. The ‘Landers came right back on their next possession with Kyle Birchfield scoring on a 33-yard scamper. The run for two failed and Cloudland trailed 14-6.
Sowards got the Warriors into the endzone once again scoring on a fourth down play from 11 yards and Ensor’s two-point pass to Drew Blevins made it a 22-6 Warriors lead.
Never one to quit the Highlanders scored on a 74-yard drive with Cayden Clarke pulling off a 41-yard run and capped the drive with a 22-yard reception from Camden Peppers. Birchfield ran in for the deuce for the final score of the game.
“We had way too many penalties,” ‘Landers head coach Zach Benfield said. “We have to be more mentally focused. We messed around in practice and weren’t focused thinking we would just come out and win. We have to be a lot better.”
Happy Valley 22-14
Cloudland 0 0 6 8 – 14
Happy Valley 0 6 16 0 – 22
Scoring summary
Second Quarter
H – Ensor 1 run (kick failed) 7:35
Third Quarter
H – Deakins 39 pass from Ensor (Deakins run) 7:48
C – Birchfield 33 run (run failed) 5:52
H – Sowards 11 run (Ensor pass to Blevins) 1:24
Fourth Quarter
C – Clarke 22 pass from Peppers (Birchfield run) 9.2