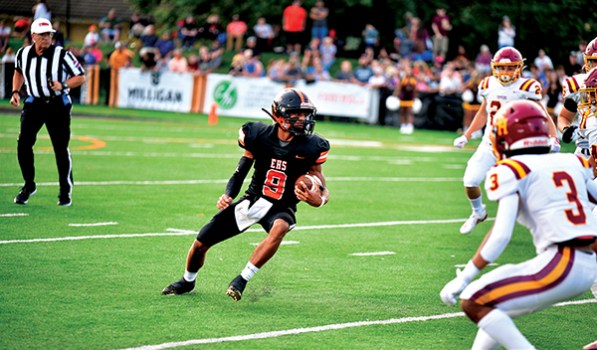 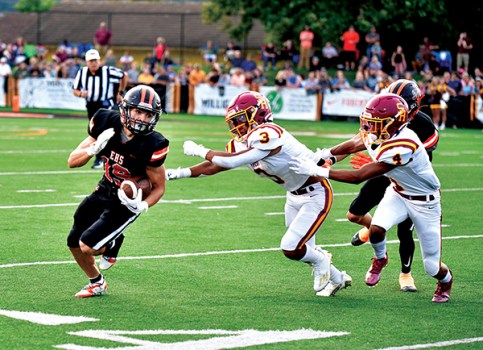 Star Photo/Ivan Sanders Cyclone wide receiver Teddy Orton slips past the attempted tackle of a Science Hill defender on a short out pass from Jeriah Griffin. 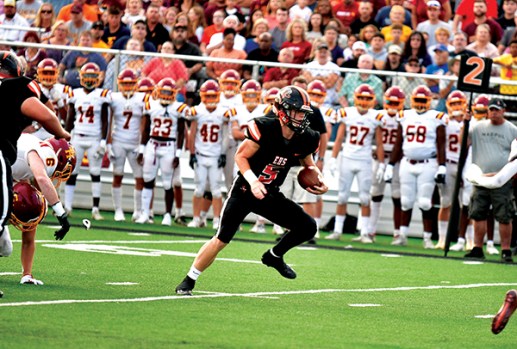 Star Photo/Ivan Sanders Senior running back Cade Russell looks for additional yardage. Russell was knocked out of the game in the second quarter on a targeting penalty against Science Hill's Kellen Hensley who was ejected. 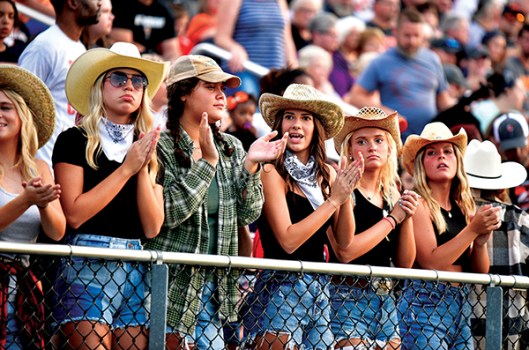 Star Photo/Ivan Sanders The Elizabethton student body was ready for a night of high anticipated football against Science Hill. 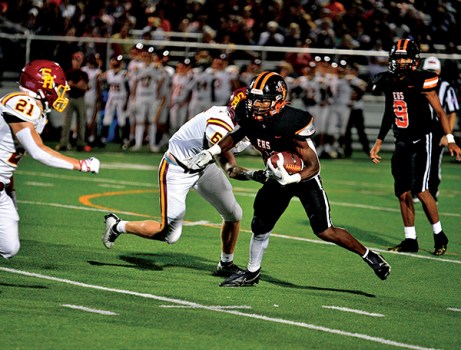 STAR CORRESPONDENT
The Elizabethton Cyclones have had the Science Hill Hilltoppers number for the last four years but on Friday night at Citizens Bank Stadium, the ‘Toppers finally managed to cross the hump in version 2 of the Railroad Rumble.
Science Hill put two scores up in the first half to seize control of the game and managed to clamp down on the Cyclones offensively to take the Railroad Rumble trophy back to Johnson City with a 17-7 victory.
At times the game got ugly from penalties to a bone-jarring targeting penalty called against Science Hill’s Kellen Hensley on a hit to Cyclone senior Cade Russell in the second quarter.
The Cyclones took the opening kickoff and were marching until they stalled out bringing up a fourth down near the ‘Topper 20-yard line.
Coach Shawn Witten elected to send in placekicker Caleb Campbell whose boot was wide turning the ball over to Science Hill.
Elizabethton stopped the ‘Toppers ensuing drive when junior Cam Baker stepped in front of a Jaysahn Swartz pass.
The ‘Toppers managed to get on the board with 1:21 left in the first quarter when Swartz called his own number and carried the ball over from the five-yard line.
Max Turan’s point-after attempt was good and SH took the early 7-0 lead.
Science Hill scored their second touchdown in the second quarter with a little over two minutes off the clock when speedy senior running back Javin Chester bolted over from five yards out.
Turan’s kick was once again good and the score was 14-0 ‘Toppers.
With six minutes before halftime, the ‘Toppers set up to punt to the Cyclones and Russell was looking up for the ball when Hensley rammed Russell like a runaway train sending Russell to the ground and his helmet flying off along the Cyclone sideline.
Hensley got to watch the rest of the game from the sideline while Russell was treated for a concussion.
The incident put some fire in the bellies of the Cyclones who finally responded with a score 39 seconds before the half when sophomore Jeriah Griffin put up a high spiral and somehow senior Teddy Orton came out with the ball between two defenders for a 45-yard scoring pass.
Campbell’s kick was good the the lead was sliced in half at 14-7 at the halftime intermission.
The Cyclones came out of the locker room and just could not find any offensive rhythm as their drives were more of a three and out variety in the final half of play.
Science Hill tacked on a 24-yard field goal by Turan with 16 seconds remaining in the third quarter for the game’s final score.
The ‘Toppers recorded 12 first downs on the night to eight for the Cyclones. Science Hill ran the ball 48 times for 198 yards while the Cyclones only gained 84 yards on 29 carries.
Nate Stephens led the way on the ground with nine rushes for 40 yards while Griffin accounted for 38 yards on 17 carries.
Elizabethton had 89 receiving yards on 8-of-14 passing with two interceptions as Orton led the way with three catches for 77 yards and the score.
Each team was flagged 10 times with the ‘Toppers being marked off for 80 yards and the Cyclones 70.
Wes Shankles recorded a sack for the Cyclone defense.
There will be more questions than answers as the Cyclones enter a bye week with the top question being how to jump-start the offense.
Elizabethton will take the field in two weeks when they travel to Greeneville to take on the Greene Devils in a key conference showdown.