Lady Jr. Cyclones battle to draw against Boone on pitch 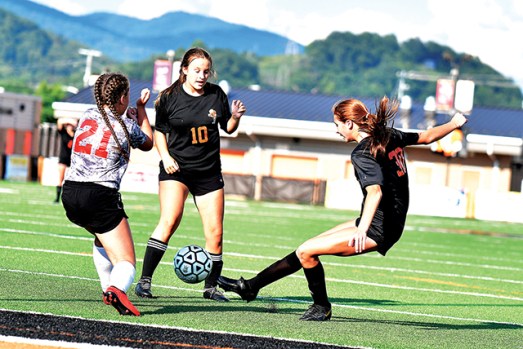 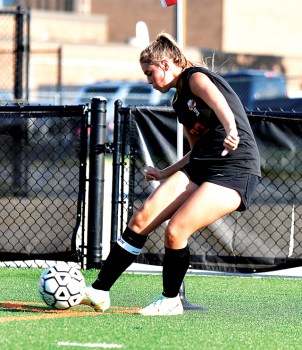 Star Photo/Ivan Sanders Maddix Morton prepares to send a corner kick to the front of the Boone net. 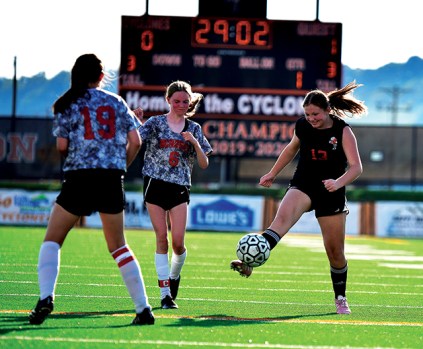 Star Photo/Ivan Sanders Abbigale Simerly puts a foot on the ball as she tries to send the ball downfield against the Boone defense. 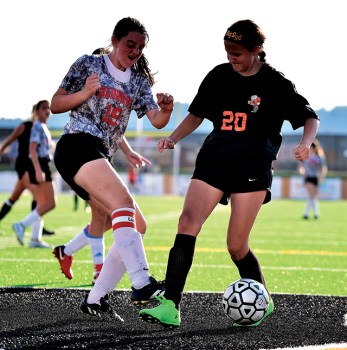 STAR CORRESPONDENT
The  T.A. Dugger Jr. Lady Cyclone soccer team was shooting for its fourth win of the season on Thursday when they played host to the Jr. Blazers of Boone on the pitch at Citizens Bank Stadium.
Overcoming a sluggish start in the first half where they found themselves trailing 1-nil at the break, the Jr. Lady Cyclones regrouped to come back to end the game in a 1-1 draw.
Boone took the early lead just 5:05 into the first half to take the 1-nil lead which held for the remainder of the first half as the Jr. Lady Cyclones were their own worst enemy playing with a lackluster energy that couldn’t seem to generate any offensive momentum.
“We started off slow and sluggish and didn’t have any urgency,” said Jr. Lady Cyclone head coach Samantha Husband. “We weren’t moving to the ball and weren’t playing our game at all in the first half. We came out in the second half and were more forward driven and offensively driven and wanted the ball. It was a much better game for us in the second half.”
The Jr. Lady Cyclones evened the game at 1-1 at the 31:48 minute of the game when Liahna Nave came up with possession of the ball at the 10-yard line and blasted one past the Jr. Lady Blazer goalkeeper to tie the game.
“When I kicked the ball, it rebounded off the goalie so I knew I had to shoot to score,” said Nave. “It was aggressive on both sides of the ball. It was crazy.”
Both teams took turns at challenging the opposing goal keep only to be turned away on each attempt.
Things got a little unsettled about midway through the second half after a Boone parent became upset with the referees because of what he construed as the Jr. Lady Cyclones becoming too physical on the field.
After having words with the referee from the stands, T.A. Dugger Athletic Director Justin White did a good job of de-escalating the situation as he had to escort the parent from the stands so the game could get back underway.
When play resumed, both teams continued to battle to get the go-ahead score only to be turned away as the game ended in a draw.
“I know the girls are not happy with the result and of course I want to win too, but Coach Eddie (Morrell) and I always look at how they play versus the results because we are trying to develop players,” said Husband. “We are happy with a lot of things that happened tonight. We do have some things to fix because we are better than that so we will go to work on Monday and fix it for next week.”
The Jr. Lady Cyclones (3-1-1) will travel to Sullivan East Middle next Wednesday for a 5 p.m. contest and will host University High at Citizens Bank Stadium on Thursday at 6 p.m.