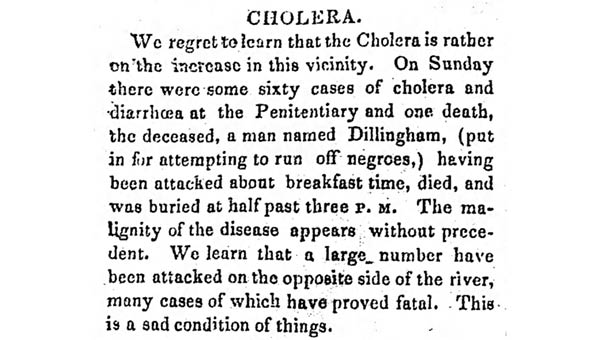 Dillingham Art: News of Dillingham's death was reported in this July 2, 1850, article in the [Nashville] Republican Banner

It’s hard to overstate the importance of Uncle Tom’s Cabin by Harriet Beecher Stowe. It was second best-selling book of the 19th century (following the Bible) and was translated into 20 languages by 1857, which was remarkable for its time. The novel had a profound effect on the abolitionist movement and on the way average Americans viewed slavery.

In fact, it has been widely reported that Abraham Lincoln, upon being introduced to Stowe in 1862, said she was “the little woman who wrote the book that started this great war.”

Actually, there is. But for 170 years, the world of Tennessee history has deliberately avoided it.

Richard Dillingham (born 1823) was a Quaker teacher from near Cincinnati, Ohio, who knew some free African Americans who told him they had relatives held in slavery in Nashville. In December 1848, he came to Nashville and tried to help these enslaved people escape. Dillingham was caught and jailed on December 7, 1848.

From its tone, the [Nashville] Republican Banner had no sympathy on the man.

“A man who calls himself Dillingham was arrested in this city on Tuesday night by Constable Maddux, in the act of kidnapping a number of slaves. He had them in a hack and was about crossing the bridge. This is a curious transaction for this latitude, as he could hardly expect one would suppose to get them off to a free state unmolested. He is in custody.”

Four months later, Dillingham was sentenced to three years in the state penitentiary, which was then located near the present-day site of Charlotte and 15th Avenues in Nashville. Nashville’s largest newspapers endorsed his sentence, the Nashville Daily Union saying “we seriously doubt the policy of extending to such violations of the law very great lenity.”

Dillingham died a year and a half later, still in prison.

“We regret to learn that the cholera is rather on the increase in this vicinity,” the Republican Banner reported on July 2, 1850. “On Sunday there were some sixty cases or cholera and diarrhea at the penitentiary and one death, the deceased, a man named Dillingham (put in for attempting to run off negroes).”

Dillingham was buried at the prison cemetery, which means his remains still lie in an unmarked grave somewhere near the corner of 15th Avenue and Charlotte (near a Burger King, as best I can tell).

Dillingham’s case was well publicized at the time. News of his arrest was reported as far away as England; news of his death in abolitionist publications all over the North. He was considered a martyr by people such as John Greenleaf Whittier, who wrote a poem in his honor. Prominent Quaker and abolitionist Levi Coffin wrote about Dillingham in his memoirs.

A year after Dillingham’s death, Harriet Beecher Stowe came out with Uncle Tom’s Cabin. In the months that followed its publication, many Southern politicians, editors and ministers claimed she deliberately exaggerated the horrors of slavery in her novel. That’s why in 1853 she wrote and published A Key to Uncle Tom’s Cabin — a list of people, facts and events on which the novel is based.

Chapter 13 of A Key to Uncle Tom’s Cabin is about Quaker abolitionists who were active in the Underground Railroad. Much of this chapter is devoted to the story of Richard Dillingham, the 25-year-old Quaker from Morrow County, Ohio, who was arrested in Tennessee for trying to help slaves escape and who died in prison a year later.

Stowe maintains that Dillingham’s mother pleaded with Tennessee Governor Neill Brown to pardon her son, to no avail. Stowe also claims that while in prison, Dillingham earned so much respect from the warden that he was tending the sick when cholera broke out.

“What must that system be which makes it necessary to imprison with convicted felons a man like this, because he loves his brother man ‘not wisely but too well?’” Stowe wrote.

The story of Richard Dillingham affected the abolitionist movement and was one of the many things that inspired Harriet Beecher Stowe to write Uncle Tom’s Cabin. My questions are these: Why isn’t Dillingham a part of Tennessee history? Why isn’t he mentioned in the Tennessee Encyclopedia of History and Culture? Why isn’t there a historic marker honoring him at the former site of the Tennessee State Prison?