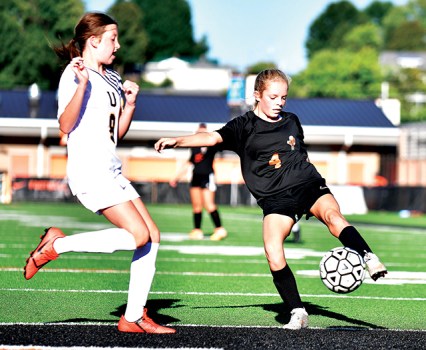 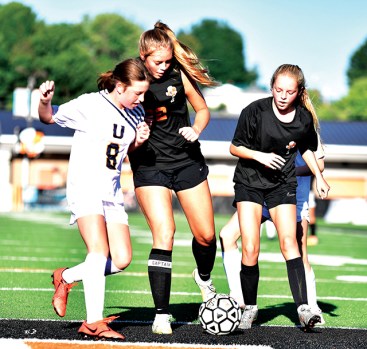 Star Photo/Ivan Sanders Jr. Lady Cyclone Maddix Morton (22) battles for possession of the ball inside the box against University on Wednesday. 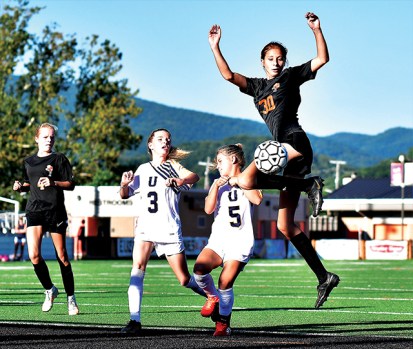 Star Photo/Ivan Sanders Vella Nave leaps high above the University defenders as she boots the ball toward the goal for the Jr. Lady Cyclones. 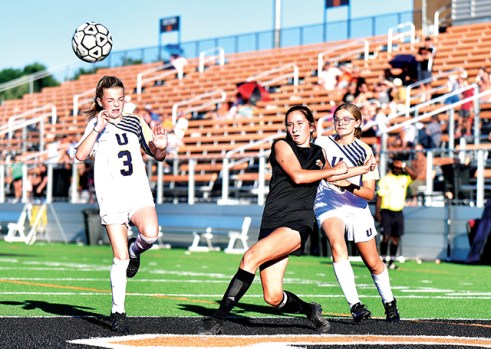 Star Photo/Ivan Sanders Jr. Lady Cyclone Liahna Nave sends a shot on goal in the first half of Wednesday's match between T.A. Dugger and University. 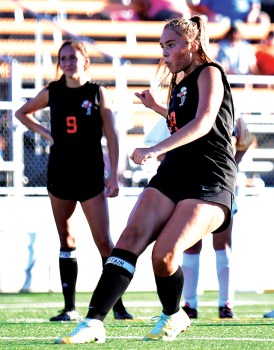 Star Photo/Ivan Sanders T.A. Dugger's Maddix Morton watches as her penalty kick finds the back of the net for one of her three goals on Wednesday.

STAR CORRESPONDENT
After finishing in a tie with Boone last week, the Jr. Lady Cyclones of T.A. Dugger have returned to the pitch this week playing like the Cyclones from the first of the season according to head coach Samantha Husbands.
Coming into Wednesday evening’s contest, the Jr. Lady Cyclones defeated Sullivan East Middle on Tuesday by a 5-0 score and matched that in Wednesday’s performance thanks to a hat trick from Maddix Morton and a pair of goals from Liahna Nave to win 5-0 over University School at Citizens Bank Stadium.
The score could have been much worse had a goal blasted in from Vella Nave hadn’t been waved off due to an offside in the first half and a potential fourth goal by Morton was also wiped off the board because Morton touched the ball first coming off of a ricochet off a penalty kick late in the second half.
Morton’s first goal came at the 25:25 minute of the first half as Bella Nave placed a perfect pass to Morton standing directly in front of the University goalkeeper’s shadow to give the Jr. Lady Cyclones a 1-nil lead at the end of the first half.
As the second half opened, it didn’t take long for Morton to laser another shot into the back of the net from 10 yards out to give TAD the 2-nil lead at the 33:37 minute of the contest.
After a great defensive effort by the Jr. Lady Cyclones after the score, Nave recorded her first goal at the 34:43 minute on a sure-footed kick from 15 yards out. The Jr. Cyclones led 3-nil at that juncture.
Morton finished off her hat trick of three goals on a penalty kick thanks to a Jr. Lady Buc being called for a hand-ball inside the box. The Jr. Lady Cyclones were cruising at this point leading 4-nil with 18:10 remaining in the contest.
Nave put the cherry on top of the 5-nil win when she connected on her second goal inside the University box at the 51:05 minute of the contest to give the final margin of victory.
Morton’s three goals gave her five in her last two games.
“We have practiced real hard and we worked as a team,” said Morton. “We communicated more and stayed in our positions and stayed spread out. I was trying to get to the ball faster and stay in the corners more because that’s normally where I am open so my teammates could find me there to get more shots on goal.”
Husbands was proud of the way her team has responded in the last two games and especially in Wednesday’s contest as the team stepped up as a whole throughout the match.
“We started a little slow last night which was a wake up call to our eighth graders that our season is halfway over,” Husbands said. “We have a month left and every win and every goal matters when going into tournament week. I feel like everybody stepped up collectively and realized that we are here and have a job to do and lets put this game away and do what we have to do.
“Maddix (Morton) is a presence and makes a difference wherever she is and it’s good to see Liahna (Nave) score a couple tonight as well. We did a better job tonight in not just kicking it to nobody but actually settling down and lifting our head up and passing the ball.”
The Jr. Lady Cyclones will be back in action at 5 p.m. on Tuesday, Sept. 6 at Crockett.